The Italian corner in the European corner of Africa

The Italian corner in the European corner of Africa

Bacini’s has been in Cape Town for over 15 years, serving the locals their daily pizza

Bacini’s is a truly family run business. 'Bacini’s' means 'baby kisses' tells me owner Raimondo; he used to tell his wife "Give me bacinis". He's such a character, a real Italiano. His wife, daughters, sister and brother-in-law are all part of the business. "This is a nice simple family restaurant. It’s consistent: the same people, the same owners, the same standard. We’re very passionate about our place." The waitresses are students and are part of the family as well as the pizza guys Michael and Levy, who have been with Raimondo since the beginning.

Bacini’s started 1990 in Rosebank, Johannesburg under a different name, in 1995 they moved to Cape Town’s lower Kloof Street and for over 13-years they’ve been dishing up their pizza and pasta to hungry and happy locals on the top of Kloof Street.

"Traditional Italian food the way it’s supposed to be made"

At Bacini’s you can choose from a big variety of Italian staples. They try to keep things traditional and not go overboard with flavours. Most pastas they even make on site. Raimondo loves food and says "I eat everything. Here you get big portions, value for money, that’s what Bacini’s is known for."

The famous pizza here is the 'Bacini’s Special' with mushrooms, ham, olives, pineapple, onion, green peppers, asparagus and salami. Manager Nelson talks about "colourful pizzas with nice and juicy flavours". The gourmet pizzas are named after people that were deeply connected to Bacini’s, like Valentino, Garibaldi, Adriano... Cute. The top seller is the bacon, feta and avo pizza, but I’ve had this one before, so let’s try something new. We choose the Napoli and Valentino. Very yummy.

Raimondo’s sister Rafaella gives me a hard time when she sees I put extra Parmesan cheese on my pizza. "You would really get in trouble if my dad would see this. It’s only for the pasta not the pizza."

I also had the salad 'Carlita' with everything you can think of: from artichokes to peppadews, lettuce, feta, smoked chicken, eggs etc.. But to be honest, you don’t go to Bacini’s for a salad.

When soccer, cricket or rugby is on, this place is pumping (the walls are covered with soccer shirts, flags and general sports paraphenalia.) On non-sport days, the restaurant is just as vibey.

"Every night can be a party" Raimondo says proudly. By the way, he loves being the pizza man so much that he goes to festivals and concerts with his pizza-trailer.

"The good feedback makes it so exciting, it gives us energy." Raimondo shakes peoples hands, says hello and good-bye to everyone and he knows his loyal customers by name. Even on his off-days Raimondo hangs out here. While we chat, his friend arrives on his bicycle. Raimondo shouts "See, he ate too much pizza", the friend agrees...

Nelson and I keep on drinking wine on the lovely terrace, watch what’s going on on Kloof Street. We‘re talking about Cape Town being the corner of Europe in Africa. "And Bacini’s is the little corner of Italy." he concludes.

PS: There is parking on the premises. 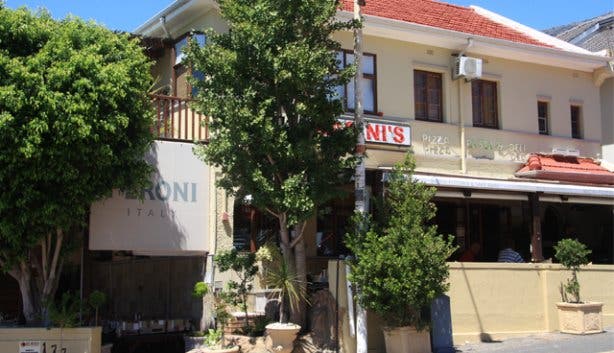 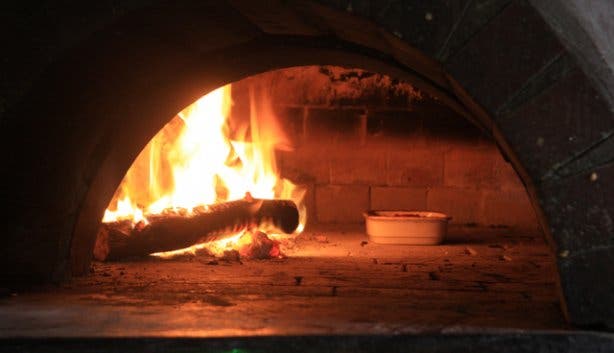 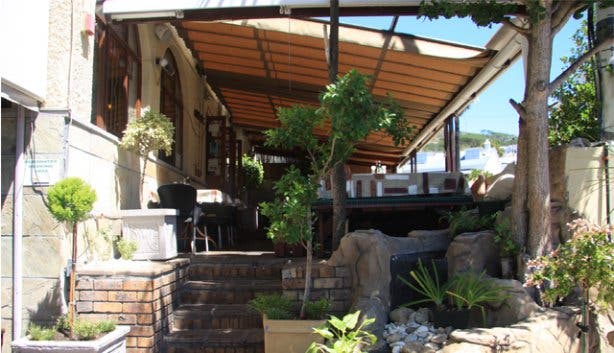 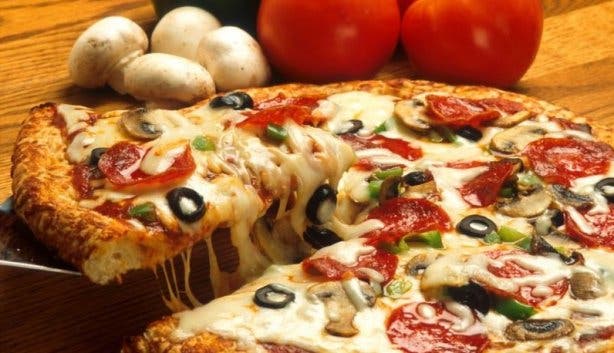 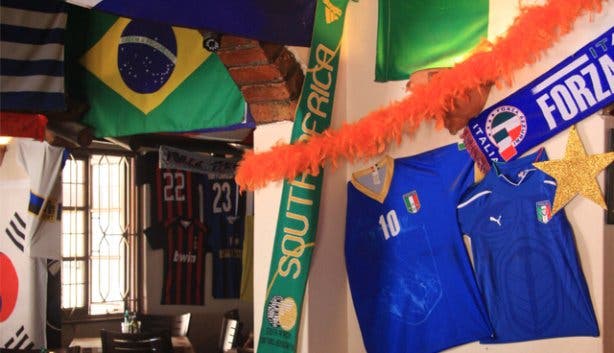