“Snake!” The call comes in over the radio loud and clear. Our game ranger, Mike Fabricius, kicks the Land Rover into reverse and we hurtle back over a rocky outcrop in the direction of the lodge. “It’s a skaapsteeker,” he says excitedly, jumping out and approaching the serpent from the rear. “And it’s a big one!” Barehanded, he grabs the 2-m reptile by the tip of its tail. The woman behind me gasps as the snake writhes, rears back and flicks up, just narrowly missing Mike’s face.

“It translates to sheep stinger,” he explains, unfazed, still holding the spotted creature out in front. “The farmers used to think these buggers were responsible for killing all their livestock.”

He lays the snake back down on the dirt road, and we’re off again into valleys scooped out by glaciers of ice ages past, all the while on the lookout for lions, rhinoceros and a whole lot more.

In a Western Cape where safaris are generally synonymous with fenced parks, the Gondwana Private Game Reserve on the scenic Garden Route offers a genuine, unique South African nature and wildlife experience in a malaria-free area. The reserve is the only one in the region to provide guests with the chance to see free-roaming Big Five game within four hours’ drive of Cape Town, and it does so at a reasonable cost at that.

“For us, if something can’t be self-sufficient on the reserve, we don’t want it,” sums up General Manager Neil Davison. “If we have elephant, they have to look after themselves.”

It’s an uncanny comment, considering just prior to the chat my game drive group was stared down by a hefty bull. I know full well that these ancient lords of the land are salad-eaters, but it still didn’t bode well for my nerves to be given the stink eye by an animal that weighs over 6 tonnes.

The same goes for the lions we heard in camp during the wee hours of the previous evening. Amazing, but a little unnerving. At first, the progressive growling sounded like neighbours getting a little too frisky, but when sleep slowly deteriorated to wakefulness, it became clear that the low, guttural rumblings were anything but human.

As Mike reminds me on our game drive this morning though, “The animals, lions included, wouldn’t be here if it wasn’t for the flowers.”

And accordingly, at Gondwana, while there are certainly plenty of menacing predators and awe-inspiring plains game to ogle, the real emphasis is on the biome and the cycle of life it sustains.

“It’s an exceptionally unique ecosystem and we focus on conserving it,” explains Neil, who’s also an impassioned botanist. “There are over 9000 flora species here and over 60% are endemic to this area, meaning you can’t find them anywhere else in the world.”

And so, we lumber off-road onto a trail squeezed thin by corridors of overgrown fynbos, the local name for the natural vegetation in the Cape Floristic Region. The air, once thick with the smell of honey and smoke, gives way to a bouquet almost reminiscent of baby powder.

I recognise the brightest of the bunch as the same colourful accents used to add splashes of copper-orange, fuchsia and deep red to my beautifully appointed room on the reserve. At Gondwana, you can choose to either stay at Kwena Lodge or in the self-catering, family-friendly Bush Villas.

The former comprises 14 huts that squat together in a semicircle on a hillside like bushmen watching a fire. Only instead of peering at a smoky blaze, the one-bedroom houses look out over a shimmering watering hole ringed by the distant Langeberg Mountains. Modelled on the mobile Khoisan shelters of past, the dwellings are breathtaking and effortlessly combine comfort, luxury and authenticity. They’re the go-to choice for first-time safari-goers or those looking to get the most out of a short stay.

The Bush Villas, on the other hand, are fully equipped five-star houses ideal for longer getaways and larger groups who need multiple bedrooms and vast shared spaces.

In both cases, there’s a real commitment to staying true to the spirit of the land. Bedside tables are made from polished tree stumps, African fishing baskets double as lamps, chandeliers created from hollowed-out calabashes dangle from the ceiling and intricately carved ostrich eggs make mesmerising candleholders.

And when it comes to the wildlife, Gondwana operates with the same sort of integrity. The reserve will never introduce a species that isn’t native to the area.

“If I see a warthog here, I’ll leave,” asserts Neil.

Conservation, you ask? Well, as Mike insists, pointing in front of us on our final game drive, “That baby is living proof that our efforts are working.” About 20 metres ahead of us, a young Cape mountain zebra bumbles around next to its mother. The unsteady foal is part of a species that’s among the rarest in the world, and just a giraffe length away from the little creature, a sleek-coated bontebok stands at attention. Nearly eradicated completely at one point in time, this beautiful antelope subset is starting to recover and has also settled in nicely.

So, while Gondwana may not be Kruger National Park – it doesn’t even pretend to be, for that matter – the Garden Route game reserve is absolutely the kind of place where you’re likely to have an unforgettable, once-in-a-lifetime safari experience.

Tip: Gondwana is fully family friendly. So, if you’re interested in visiting with the whole clan, be sure to enquire about the junior ranger programme.

The Bill: Incredibly affordable, as compared to the majority of Big Five experiences elsewhere in the country. A stay at Kwena Lodge on a full-board basis costs between R2400p/p and R3250p/p per night and includes breakfast, lunch, high tea, dinner and two game drives per day. A stay at Kwena Lodge on a half-board basis costs from R1750p/p to R2250p/p per night and includes breakfast, high tea, dinner and one game drive per day. Call Gondwana’s reservations department for more information about the price of an overnight at the Bush Villas.

Not quite what you’re looking for? Have a gander at our overview of game reserves in the Western Cape and find a suitable alternative.

Use our events section for an up-to-date overview of happenings in Cape Town. Also don’t forget tosubscribe to our newsletter, follow us on Twitter, like us on Facebook, join our Google+ circle, connect with us on LinkedIn and check out our Pinterest boards for updates. 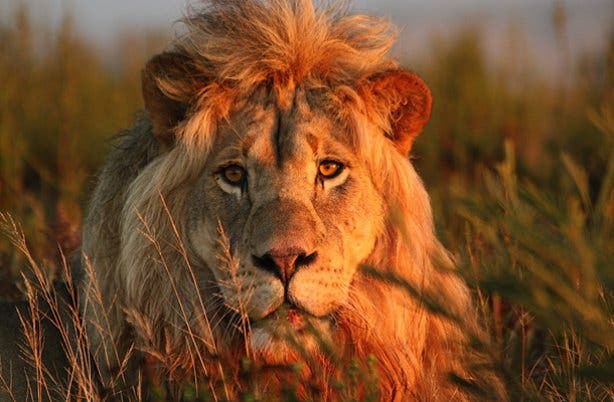 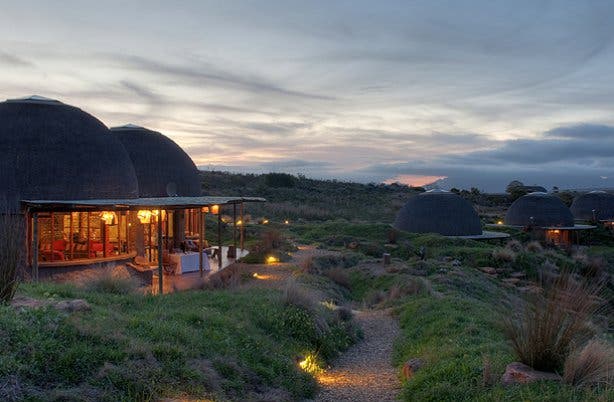 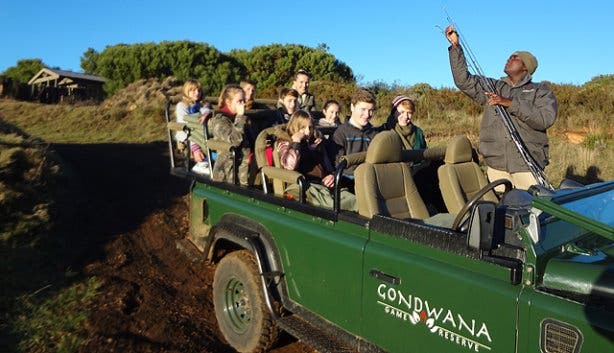 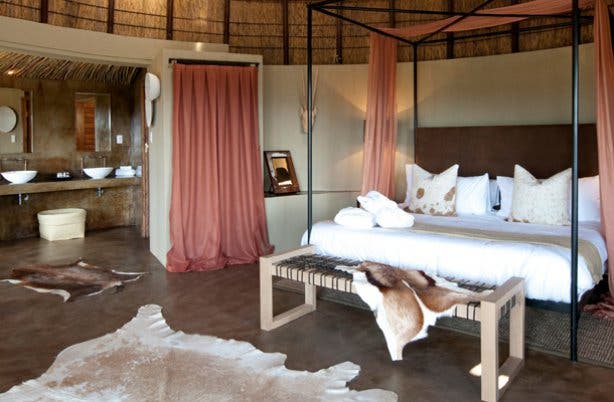 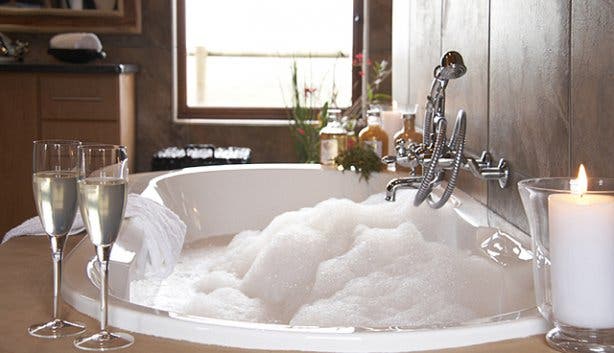 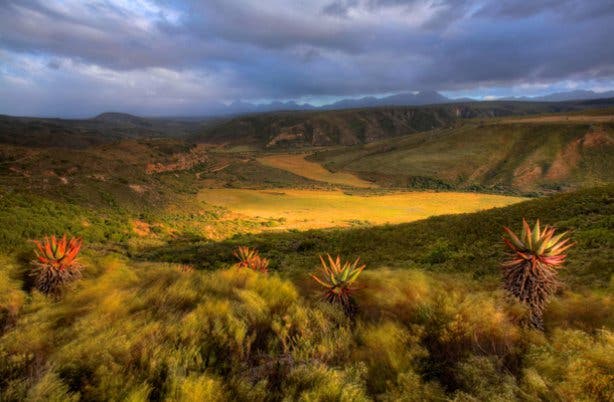 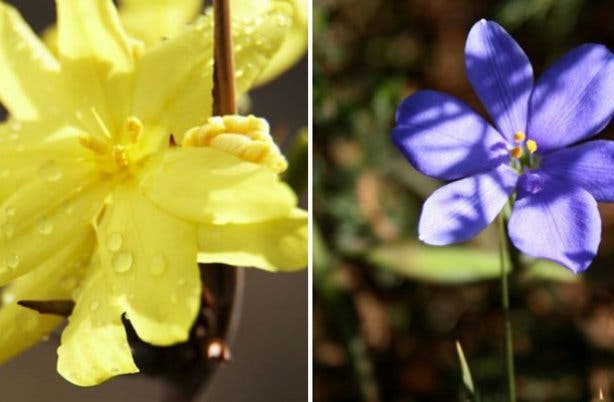