South Africans love their food and Cape Town its variety of restaurants – but where does such an eclectic mix of tastes come from?

We love mixing and mashing – one only has to take a stroll down Long Street to see the variety of foods that South Africans enjoy. From Italian to Mexican to Chinese, there’s nary a country that isn’t being represented gastronomically.

The same goes for home-cooking; we’ll try pretty much anything, and we’ll try especially hard to master other countries specialities.

Gatsby
Now for the Capetonian staple food – the great Gatsby. The dish is a style of a deli sandwich, very long rolls are cut open lengthwise and stuffed, normally with hot chips (French fries) but a variety of fillings can be used like polony, steak, cheese and even egg. The sandwich is most popular in the Western Cape province which calls many fast food and takeaway outlets home in the region. It is usually shared by several people. 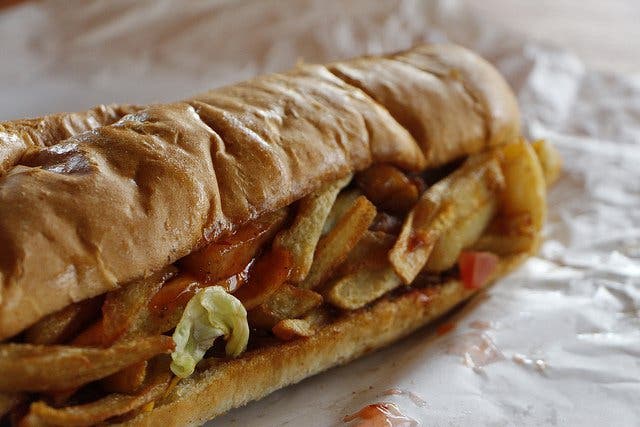 Meat, meat and more meat
Beef for preference, but as long as it once ran away from spears and arrows, we aren’t too picky. You’ll be pushed to find any South African family who DON’T have meat as the main portion of any meal. This is a large part of why braai’s (barbecues for the uneducated) are so popular, really an every weekend activity. And of course dried meat, or biltong (beef jerky as the Americans know it). 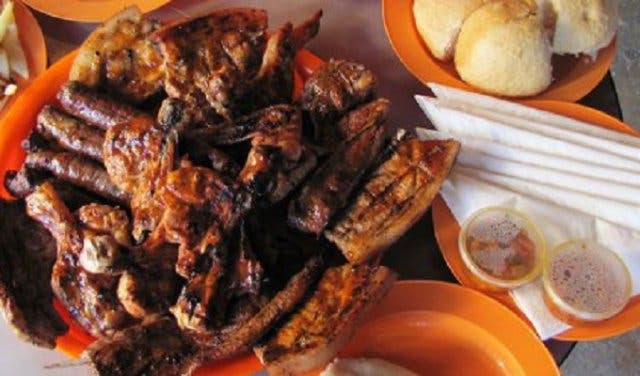 Biltong
A salty dried meat – most popularly beef or kudu, but you can get ostrich or even rhino. Biltong originated in South Africa, Zimbabwe and Namibia and has since spread out to other parts of Africa. The word biltong is from the Dutch ‘bil’ (meaning rump) and ‘tong’ (meaning strip or tongue). This South African staple food is often enjoyed during that big rugby stand-off that everyone has been waiting for. 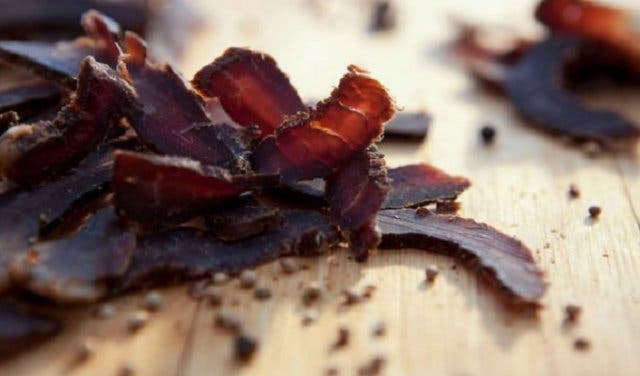 Bobotie
Malay in origin, bobotie is like meatloaf with raisins and baked egg on top, and is often served with yellow rice, banana slices, and chutney. The Afrikaans etymological dictionary claims that the origin of the dish comes from the Malayan word ‘boemboe’, which means ‘curry spices’. While others think it originates from ‘bobotok’, which is an Indonesian dish that consists of totally different ingredients, though the first recipe for bobotie appeared in a Dutch cookbook in 1609. 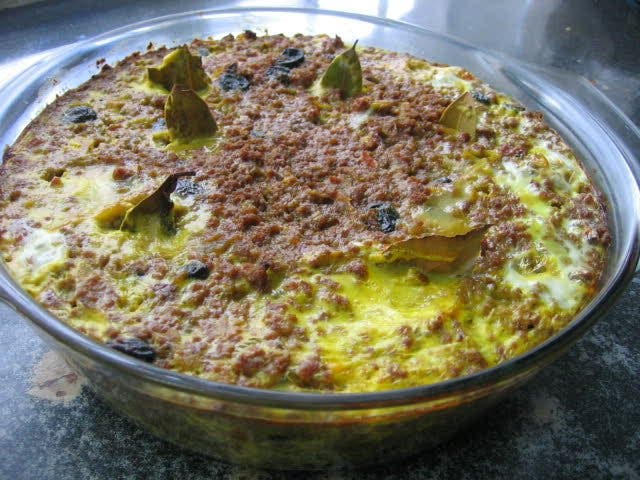 Boerewors
A more often than not thicker sausage that is traditionally braaied. The sausage finds its origins, not only in South Africa, but in Zimbabwe too. Boerewors is an important part of South African cuisine and is most popular across Southern Africa. The name comes from the Afrikaans words ‘Boer’ (meaning farmer) and ‘wors’ (meaning sausage). Boerewors is thought to be derived from a form of sausage made south of the Ardour River in France. 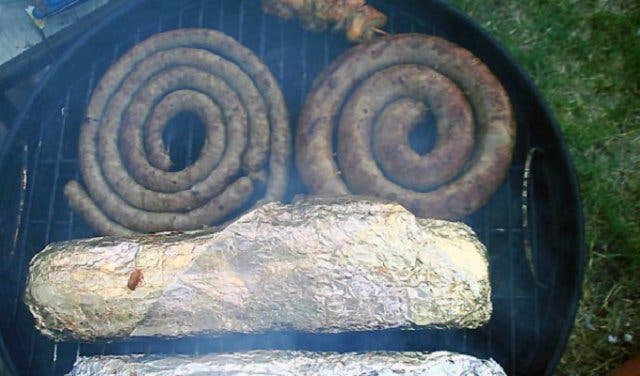 Bunny Chow
A hollowed out half loaf of bread stuffed with curry, enjoyed for lunch or dinner. The dish is often referred to as a bunny. The bunny chow first originated in the Durban Indian community and has since made its way to various parts of South Africa. They can also be found at the Indian cuisine restaurants in Cape Town. 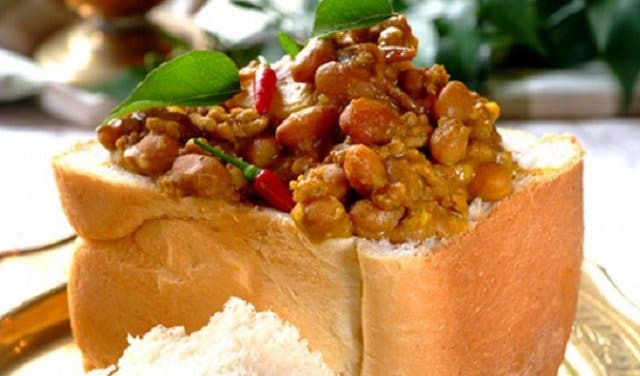 Chakalaka
A garnish or food accompaniment made of Indian/Malay origin, made of mixed onion, garlic, ginger, green pepper, carrots and cauliflower, spiced with chillies and curry. Chakalaka is a South African relish that is traditionally served with bread, pap, samp, curries or stews. To balance the spicy and fiery flavour of the relish, it is sometimes served with amasi (fermented milk). 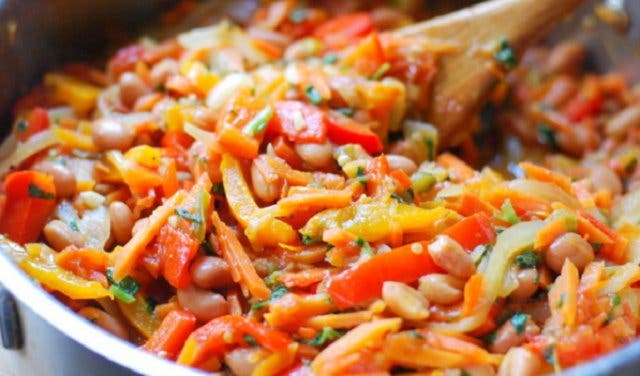 Chutney
A sweet sauce made from fruit, usually poured on meat. Much like tomato sauce however, we put it on everything. Also known as Mrs Balls, chutney is also a sauce used in the cuisines of the Indian subcontinent that can vary from a tomato relish to a ground peanut garnish or a yoghurt, cucumber and mint dip. 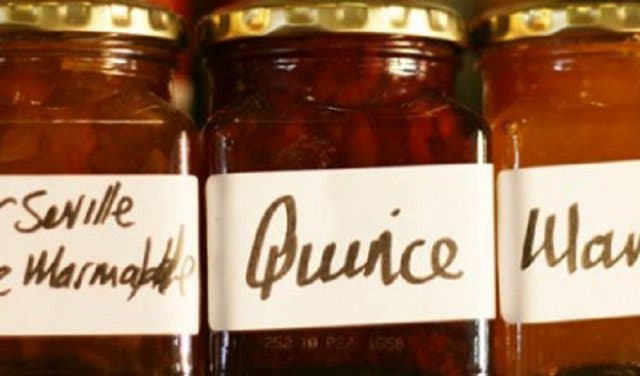 Koeksisters
Now for something that will satisfy that sweet tooth of yours - Afrikaans koeksisters are twisted pastries (plaited in fact), deep fried and heavily sweetened. The koeksister is a traditional South African flavoured syrup infused fried dough. The name of the sweet treat is derived from the Dutch word ‘koek’ (meaning wheat flour confectionary or in layman’s terms, cake). Delicious and oh so sugary! 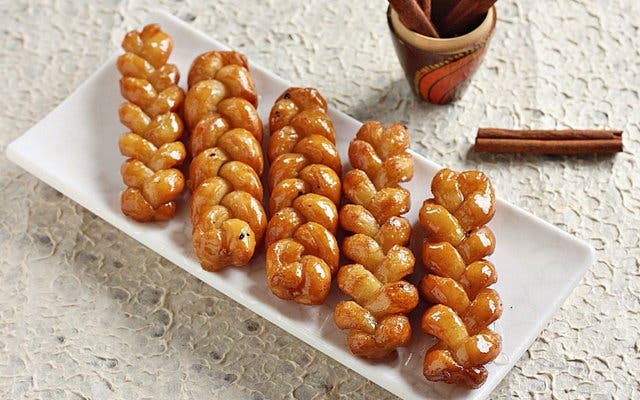 Malva Pudding
Malva pudding is a sweet spongy apricot pudding of Dutch origin. This wintertime treat contains apricot jam and has a spongy caramelised texture. A cream sauce is then poured over the dish while it is hot. It is best served hot with custard and/or ice-cream. 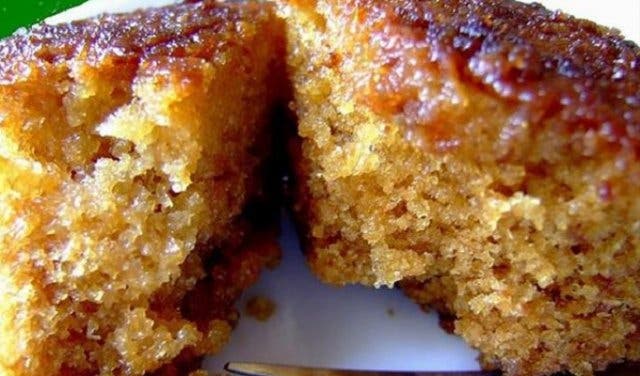 Melktert
Also known as milk tart - is a milk-based tart or dessert. Melktert is a favourite amongst South Africans, especially during tea time. It consists of a sweet pastry crust containing a creamy filling, which is made of milk, flour, sugar and eggs. 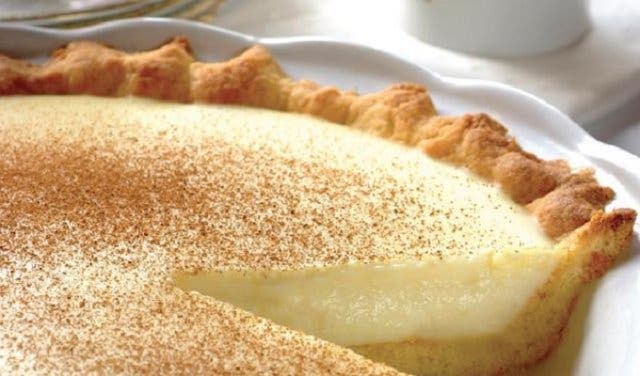 Mielie-Meal
Mielie meal (pap) is often used in baking but predominantly cooked into pap. It is a relatively coarse flour made from maize known as mielies or mealies in the Southern parts of Africa, from the Portuguese milho. The Portuguese had originally brought corn from the Americas to Africa, which is the result of us having anything that consists of mielies today. 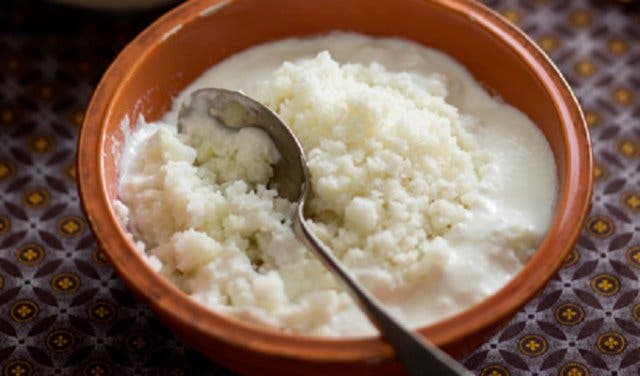 Potjiekos
The three-legged pot favourite is a traditional Afrikaans stew, made with meat and vegetables and cooked over coals in cast-iron pots. It provides for a chance to mix up a variety of ingredients to make unique and tasty stews. The dish is most popular at celebrations and get-togethers. Today people not only experiment with vegetables and meat but with seafood too. The preparation of the dish is tremendously fun and easy. 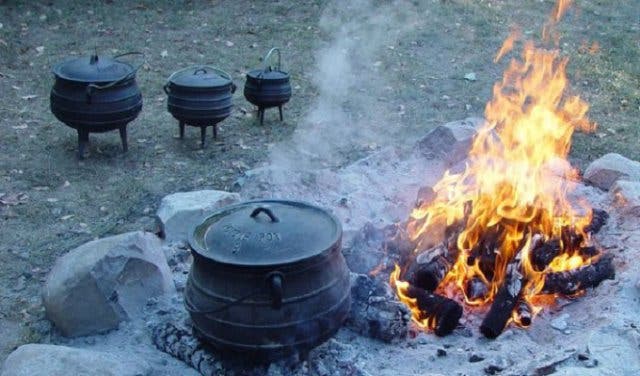 Rusks
Rectangular, (hopefully) hard and dry biscuits eaten with tea or coffee, like biscuits we dunk them in our warm beverages. It also referred to as a twice-baked bread because of its texture. You can make your own rusks, or buy them in any store. 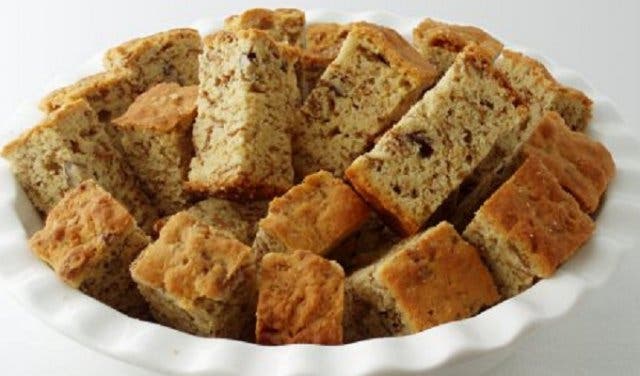 Sosaties
You might know them as kebabs – grilled, marinated meat on a skewer. A sosatie is a traditional South African dish of meat (usually lamb or mutton) that’s cooked on skewers. The name is of Cape Malay origin, which is used in Afrikaans - the word has gained greater circulation in Mzansi. The marinated, cube shaped meat pieces are skewered and braaied in a shish kebab style. Sosatie recipes usually vary but the key and common ingredients always stay the same. 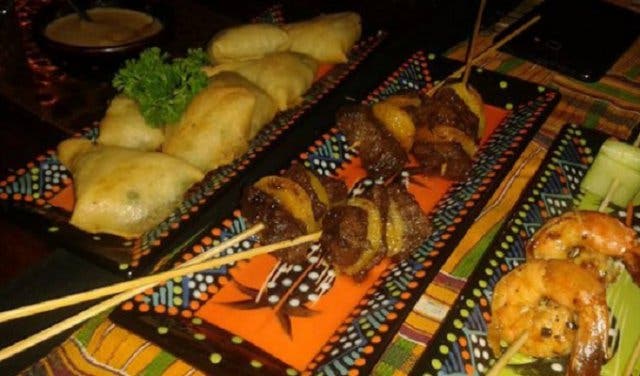 Umngqusho
Umngqusho is made from white maize and sugar beans, a staple food for the Xhosa people. The dish has several variants – made with stamp mielies, with sugar beans, butter, onions, potatoes, chillies and lemons and then made to simmer. 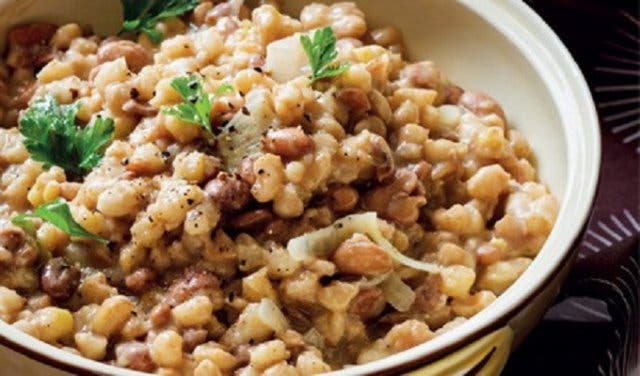 Bokkoms
Bokkoms are harders (mullet) that are salted and strung into bunches before being hung up to dry. The dish is a whole, salted and dried mullet, it is also a well-known delicacy from the West Coast region of South Africa. This salted fish is dried in the sun and wind and is eaten after peeling off the skin, in some cases it is also smoked. Almost like fish biltong. 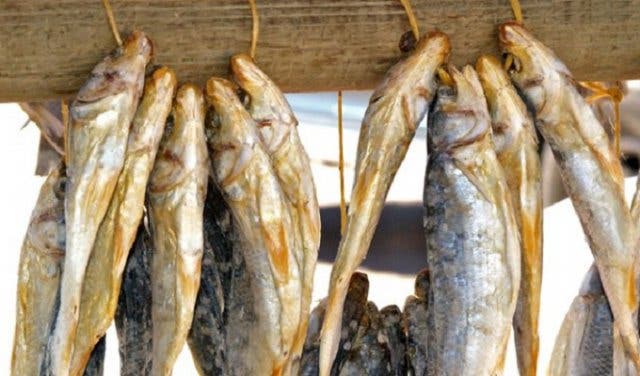 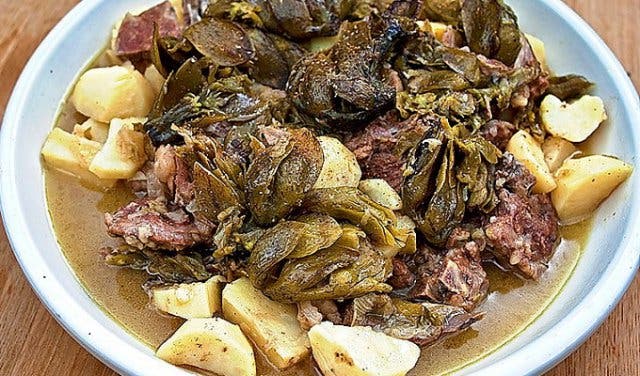 Discover one of the most unique and quintessential Cape Town beach restaurants in Moyo at Eden on The Bay. 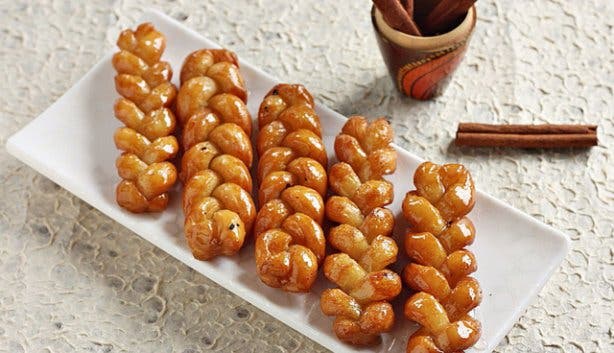 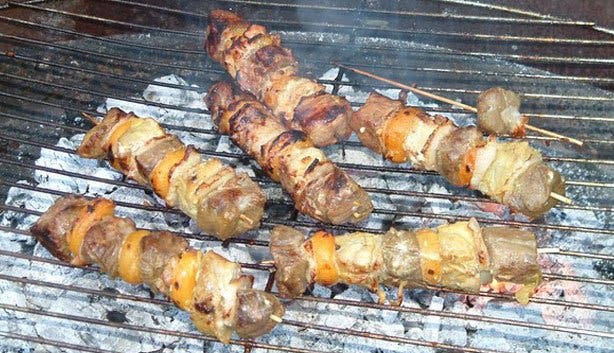 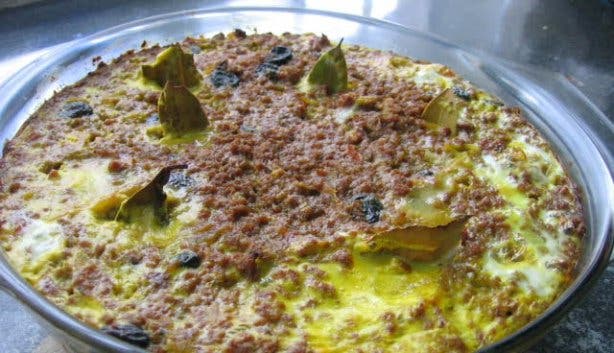 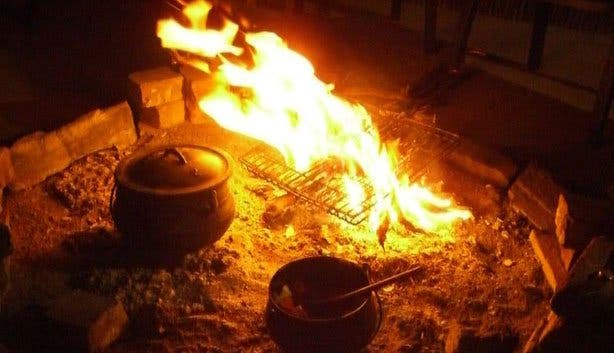 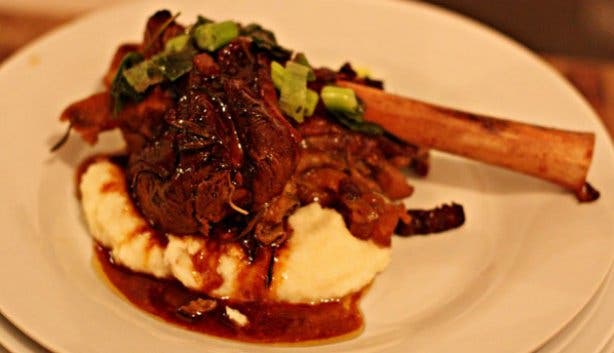 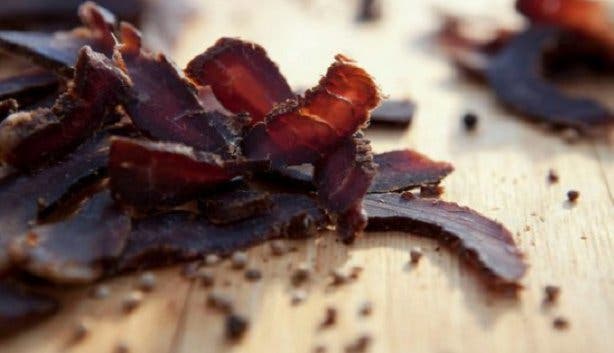 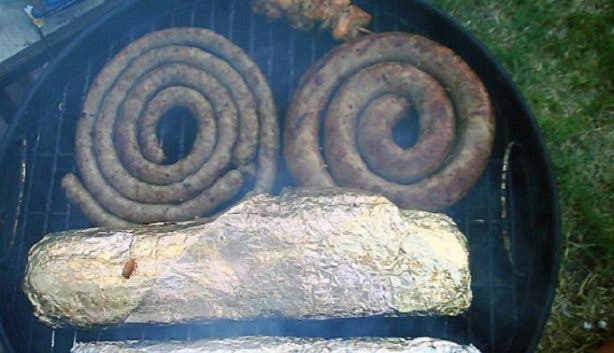 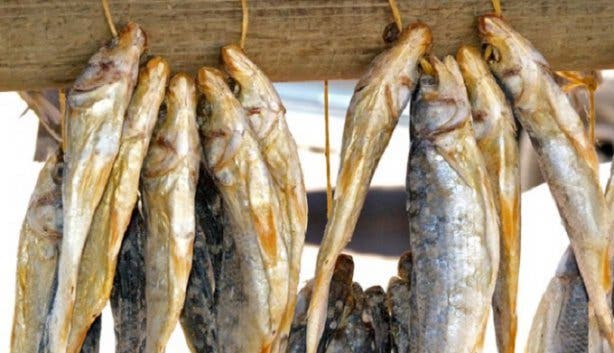 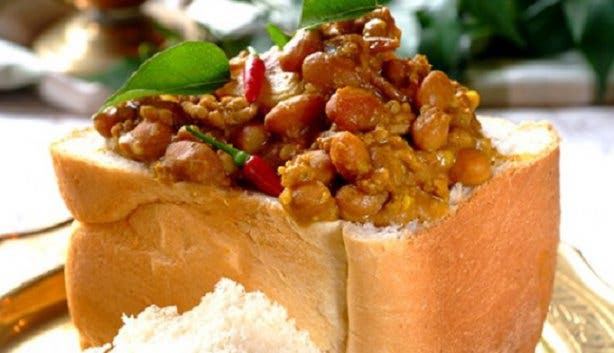 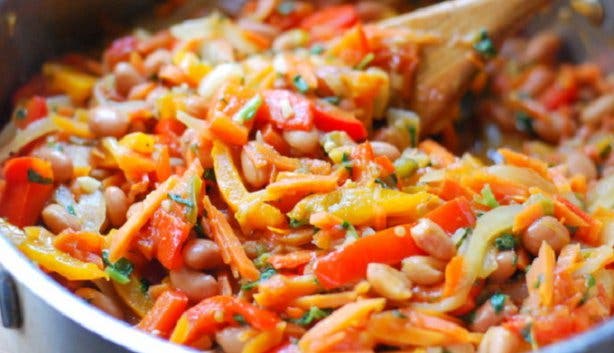 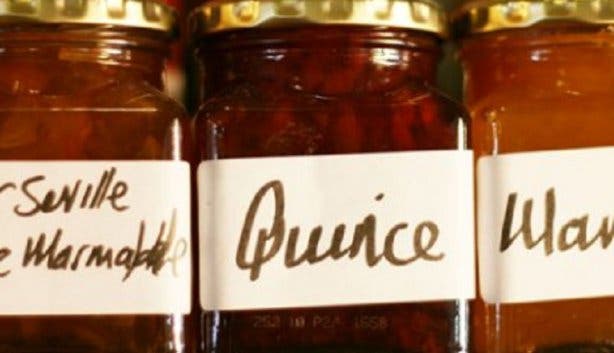