Let’s get a few things straight right off the bat. No, Downtown Ramen restaurant is not a shrine to Japan’s noble contribution to the world of microwavable, modern convenience – the two-minute noodle. And no, it doesn’t claim the sort of plastic tablecloths, laminated menus and optimistic English names – Wonderful Restaurant, anyone? – reminiscent of Sea Point or Ottery’s Asian eateries.

What it is, is the Mother City’s first authentic (and rather hip) Japanese noodle shop, and from its perch above Lefty’s Dive Bar in The Fringe district, the intimate little haunt is introducing locals to a craze that’s on par with manga, anime, Harajuku girls and, gasp, sushi.

For those still in the dark, Ramen is a rich, salty dish comprised of equal parts noodles and broth as well as a jumble of adornments: think bamboo shoots, spring onion, some sort of protein, chilli, bean sprouts, boiled egg, sesame seeds and seaweed.  And though its origin is officially unknown, many suspect that it was brought to Japan by the Chinese in the early 19th century, at which point it was thought of mainly as a working man’s dish. Since, it’s evolved into a culinary icon that’s inspired ramen celebrities, ramen comics, ramen video games, ramen university clubs and even a ramen museum. To this day, in Tokyo alone, there are more than 4000 ramen shops, countless ramen-centric blogs and even customised ramen tours that frequent the kind of noodle joints worthy of spiralling, two-hour long queues.

All this for a bowl of noodles and broth, you may be thinking. What’s the catch?

Well, the best of the best ramen aficionados will tell you it’s about balance and street cred, and that’s exactly what Downtown Ramen seems to have plenty of.

For starters, the joint occupies one of those well hidden, signage-free spaces that only those in-the-know would be able to find (see our directions in the ‘Tip’ section).

The restaurant counts only six tables and one bar, and its décor is sparing at best: think a smattering of chopstick boxes, anime stickers and graphic wall art. As it happens though, the hip service staff (they double as the eatery’s DJs) and colourful clientele make up for what the interior design lacks.

And chances are you’ll end up sitting elbow-to-elbow with one or two members of the vibrant crowd. The restaurant doesn’t take reservations, so you’ll need to fight bare-knuckle, samurai-style for bench space and then share with others already slurping up the steaming soup.

Speaking of which, the menu, like the setting is small but carefully thought out. To start, you can order one of three traditional, homemade baos (steamed buns) stuffed with various fillings: beer-braised beef short rib, charsu pork belly with citrus pickle, or the smoked aubergine with tofu and chilli pickle. And for mains, of course, there’s one of two authentic ramen options.

This is where the balance comes in. In a good ramen all the ingredients work together to form one greater-than-its-parts whole, and whether you go for Downtown Ramen’s Shoyu Pork ramen or its Kimiko Miso Veg ramen, you’ll be served up a gargantuan dish that’s all about the gestalt (see video below).

The broth is made from soy, mirin, ginger, chilli, lemongrass and the all-important stock, which varies depending on the ramen you’ve ordered, and the toppings include tangles of sprouts and green onions, sheets of seaweed, a confetti of black and white sesame seeds and, the kicker, an egg that’s been soaked in soy, mirin and sake.

Japanese beer and wine or a selection of more familiar tipple is available to wash it all down with, and if you want harder tack, it’s simply a matter of making a quick trip downstairs to Lefty’s bar.

And if all that doesn’t put a smile on your face, the bill will. The authentic Asian food is incredibly affordable, and chances are you’ll have plenty to take away for the next day’s meal too.

Tip: To find Downtown Ramen, walk into Lefty’s, pass through the aroma of pulled pork and the throng of hipper-than-thou regulars, march up the flight of stairs, curl around The Triplets of Belleville-esque wall mural and enter the dark-wood cocoon.

The Bill: The ramen dishes cost only R65 each and the baos will run you a mere R35 each. On the drinks front, sake costs R20 and Japanese beer is roughly R40.

Consider yourself an Asian food fanatic? Check out our guide to low-budget sushi spots in Cape Town. 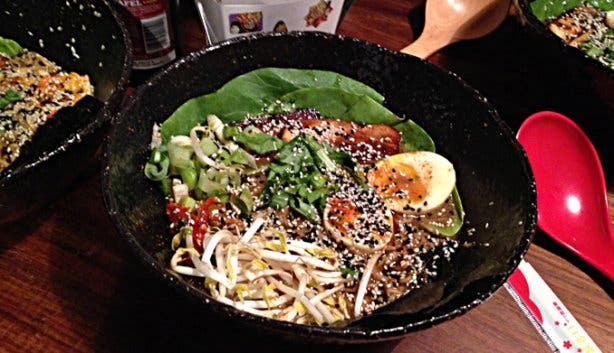 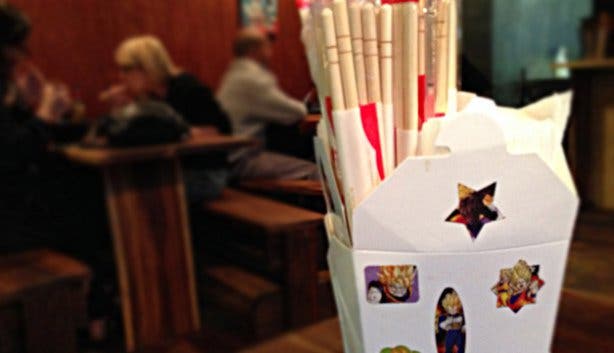 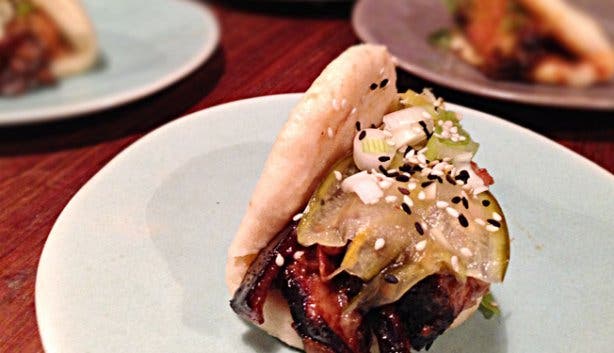 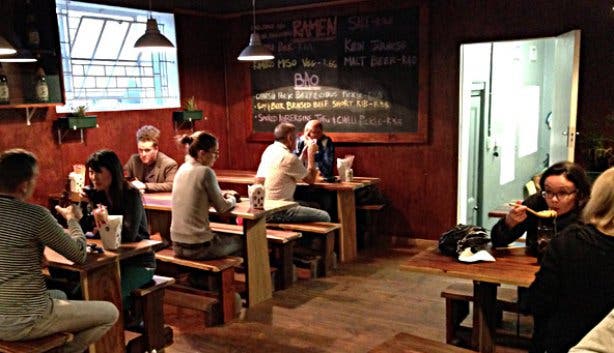