As there is no set map, time schedule or guide for the informal network, the whole minibus taxi experience can be quite overwhelming for someone who has never used it before. Not to mention the obvious overcrowding, cardboard destination signs and the gaatjie (fare collector) that whistles at you with a gold-toothed smile. Take a deep breath and keep reading, it’s not all that bad. 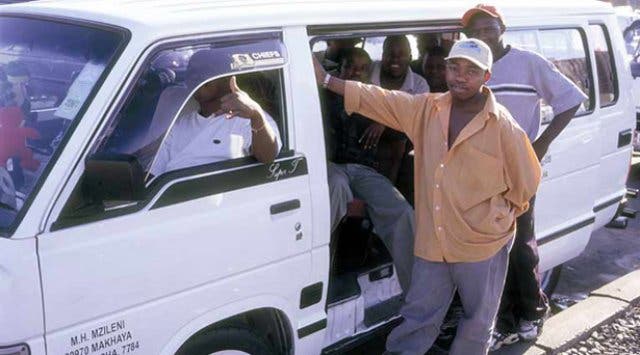 Minibus taxi's in Cape Town currently account for fifteen percent of public transport trips with approximately 7500 licensed taxis traversing the roads and bridging the gargantuan gap between MyCiti and the bordering-on-disastrous Metrorail systems. Although minibus taxi transportation is as informal as it gets, millions of people across the country successfully use these minibuses to complete their daily commute. They’re kind of like the Thailand tuk-tuks of South Africa and they work, for the most part.

How do I know which one to take?

As mentioned, there is no formal timetable of routes or departure locations available. There is also no real-time tracking system that states when each taxi comes and goes. The only way to find out where a taxi is going is to listen to what destination the gaatjie is yelling out of the window as the taxi does a drive-by in anticipation for waving hands of plausible passengers. If the gaatjie isn’t yelling the destination out to you, there might be a piece of cardboard lodged somewhere between the dashboard and the windscreen with a hand-scrawled destination adorning it. If all else fails, stick your hand up in the air as the taxi approaches you and ask them where they going before you get in.

Taxi drivers normally stop in specific locations; these locations are normally landmarks on the main road of whichever area you are in and are normally shopping centres or grocery stores, i.e. Spar, Shoprite, Pick ‘n’ Pay. However, these specific locations are dependent on route, arrival times and the requests of passengers. Passengers need to vocalise their drop off destination. You normally do this between 50 - 100 metres before your destination. 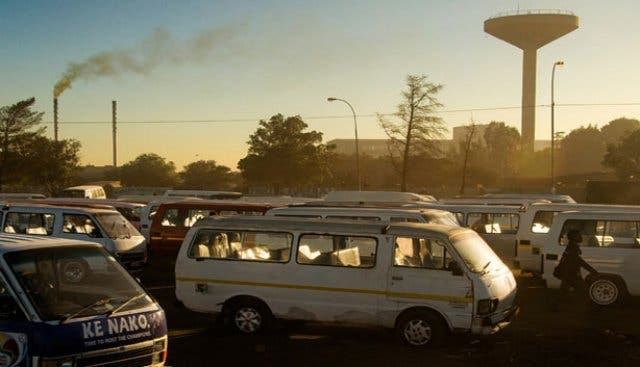 How much do they cost?

Fares range from anywhere between R7 and R20 and can vary depending on the time of day, i.e. if it’s after hours you can expect to pay a higher fare. Taxi’s normally run between 6am and 8pm, but this is dependent on your area and the general feeling of the driver. As mentioned, the gaatjie is the person who collects the fares, but he is also the sliding-door-operator, which can come in handy when your hands are full of shopping bags and you can’t close the door behind yourself. Gaatjies can be anything from eccentric characters that shout their destinations out of the window faster than Busta Rhymes waxing lyrical, to grumpy do-not-mess-with-me kind of characters that take your money in silence. Try to have exact change, because paying a R7 fare with a R200 note is going to make the gaatjie want to throw you out mid-transit and keep your money anyway. Once you’ve figured out where your taxi is going, you can tell your gaatjie where you need to be and he’ll communicate it to their driver.

I’d suggest you grab a window seat so that you don’t have to move 17 times to let other passengers out before your actual stop. Also, if they overcrowd the taxi by more people than the actual vehicle can take, you’ll be glad you’ve got a window to open. And in the common case that the window doesn’t open, at least your face will be squashed up against the glass and not the tannie who is eating four R2 packets of Nik-Naks for breakfast.

When it comes to interiors, you never quite know what you’re going to get. You could get seats that last saw upholstery when the driver bought the minibus from his retired taxi-driving brother, in 1999, and opt to sit on the crate that the gaatjie normally sits on - that’s if you’re lucky enough to get it offered to you. Sometimes drivers will still stop for you even when the taxi is so full that the only seat left is the rubbery floor mat between the door and the gaatjie. Alternatively, you could get a suave cream leather interior with double-stitched detailing on the roof between the multi-coloured flashing disco lights and a sound system that costs more than two years of taxi fare combined. Speaking of sound systems, taxi drivers are commonly known to install the baddest bass boomers in the Mother City, so get ready for some oddly mixed kwaito/deep house/radio hit tunes with bass lines that make your hair stand up and dance.

Commuting with minibus taxi’s is relatively safe, depending on where you’re going and what time of day it is. Travelling during daylight hours around the city area and the coastal suburbs is safe for tourists, but if you’re wanting to go on a self-guided tour of Nyanga, or another township, I would suggest putting your Canon with five different lens attachments away and getting a private tour guide to take you around instead of winging it yourself. If you’re travelling to an area on the outskirts of Cape Town and you’re feeling unsafe, take a tip from many of the ladies who do their daily commute on this network and shove your phone and your wallet in your bra to avoid any tsotsi’s (thieves/robbers) from trying to rob you of your goods. Remember, if you aren’t willing to part with it: stash it, don’t flash it.

WhereIsMyTransport collected data by means of sending people on as many routes as possible to record pieces of information like stops, stations, fares and routes. They then used their collected data to create a map that somewhat gives an insight into Cape Town’s valuable minibus taxi network. The result is a map that features 137 routes with almost 1500 stops: 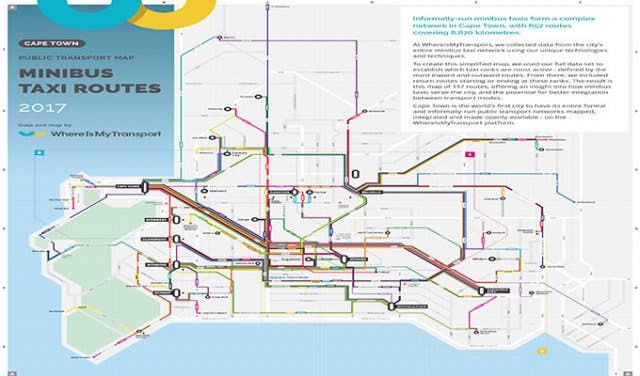 Now that you know the ins and outs of the weird and wonderful world of taxi-taking in Cape Town, make sure your pockets are filled with change and you’re ready to enjoy some bone-rattling bass on your way to work. Happy travelling! 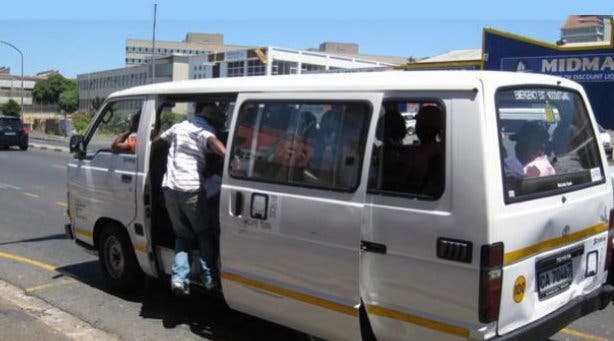 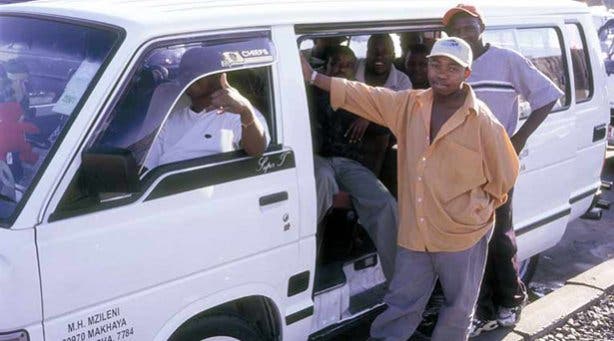 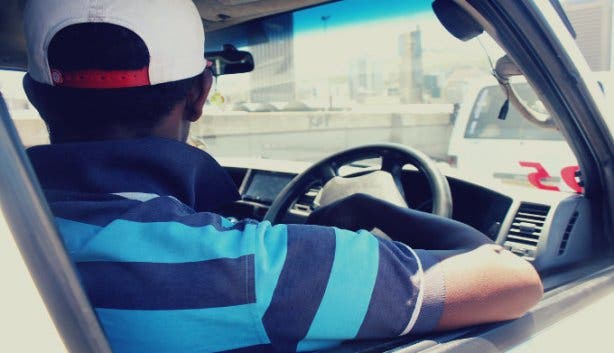 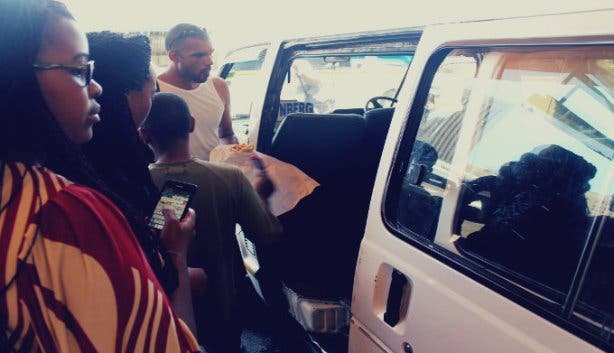 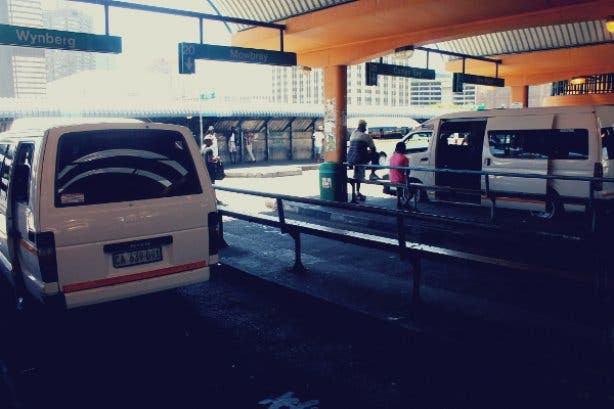 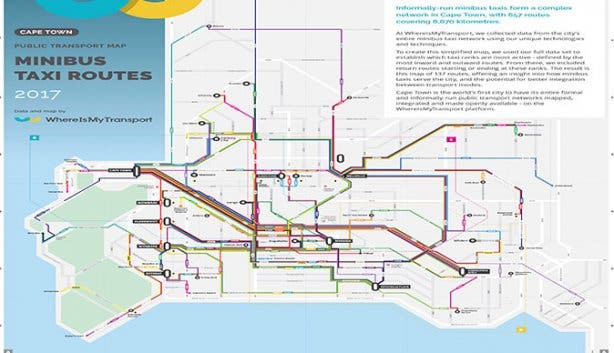 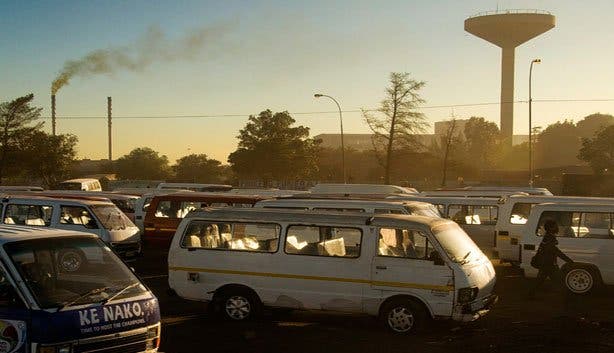 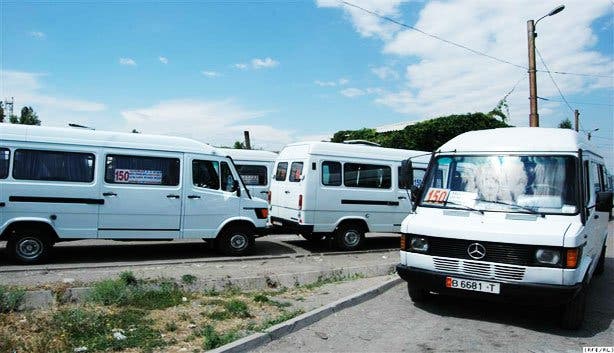