The story behind one of Africa’s oldest instruments, and how to get your hands on the ‘talking drum’ in the Mother City

Good conversations are hard to forget, and they are even more impactful when they are the kinds that have few words and use other parts of the soul to converse. It comes as no surprise then that the djembe drum, a skin-covered hand instrument with a goblet shape structure, has long been used as a form of communication – and if you’re at all familiar with the sound of the djembe rhythm, you’ll know that it is the kind of sound where each thud and thump resonates deep within – calling you closer to it, as if speaking to a part of your psyche that you never knew could speak back.

Which is why we feel that an encounter with the ‘talking drum’, as some call it, is well worth adding to your to your ever-growing bucket list. While you’re at it, you might as well top up on your knowledge of the history and benefits of thumping rhythmic tunes on the djembe, as well as where you can play and purchase the djembe drum in Cape Town and surrounds.

THE HISTORY OF THE AFRICAN DJEMBE DRUM

The roots of the djembe drum can be traced as far back as 500 AD, and while the exact origins of the enthralling instrument aren’t known, many believe it was either the Bamana people of Mali or Guinea’s Malinke tribe that are responsible for its creation. The instrument has had many uses over the course of history and some of the earliest practices included thrumming a beat to communicate to different tribes across far distances (that should give you an indication of how loud it can be). In fact, the drum ‘s notable versatility is evident in how tribes also incorporated its majestic sounds into ceremonial customs, harvests, tapping into the spiritual realm and of course, celebrating.

Much of the practises and uses of the African djembe drum still stand today, and countries such as Niger, Ghana, Burkina Faso, Guinea, Senegal, and parts of the Western world have incorporated the appealing drum into modern day uses and entertainment, making djembe an easy feat to blend into any culture.

Of course, in hopes of keeping up with ‘current times’, there are variants of the djembe drum. Nowadays, stretch-resistant nylon and polyester rope has replaced the goat-skinned, sinew and rawhide form of the instrument.

BENEFITS OF PLAYING THE DJEMBE DRUM

It comes as no surprise -after looking at the history - that the djembe drum has the power to create both stimulation and relaxation, making it perfect for any kind of mood one wants to get into.

Professional British drum player and founder of Drum Motivator Andy Byskup says that in order to get the best of what the djembe has to offer, one simply needs to ‘let go’. While it is normal for people to feel a bit self-conscious on their first encounter with the drum (as many believe that one needs some sort of experience to play), Byskup highlights that absolutely anyone that puts their mind to it can play, and that is achieved by “digging in and letting the drum engage with all of our senses”.

Although playing the hand drum can be a self-satisfying activity, it is also largely about connecting with others and contributing to something outside of oneself. It is also probably why a drum circle session has proven to be a great team- building exercise as, according to Byskup, it “is a metaphor for communication and makes you aware of the people around you”.

Furthermore, studies have revealed that playing the drums reduces stress levels, and has been used by the medical field to contribute to the improvement of mild depression, autism, Attention Deficit Hyperactive Disorder and more.  This is due to the fact that many emotional states ‘vibrate’ at certain rhythmic frequencies that the djembe drum can tap into.

Another benefit is that the ‘talking drum’ speaks a multicultural ‘bass & treble’ heavy language of its own that works as a dynamic tool; making new friends, having fun, and livening up social gatherings are some of the many benefits that are associated with thumping on  the hand-crafted percussion instrument.

PLACES TO PLAY THE DJEMBE DRUMS IN CAPE TOWN AND SURROUNDS

One of the most appealing things about the thudmaker is that it is one of the easiest drums to play!  Listed below are some places and companies that offer djembe drumming sessions, so that you can train your inner- djembefola:

Djembe drum circle in Cape Town City Centre
Touareg Trading, an African artefacts shop located on Longmarket Street, hosts free exciting drum circle sessions every Saturday (come rain or shine) from 3pm to 5pm. The fun-filled sessions are all about getting people from all walks of life together in making memories while tapping out afro beats in a warm and welcoming setting. Co-ordinator Aziz Ide says, “God knows how many friends we have made because of this drum.” What’s more, djembe drums (and other artefacts) are available for purchase at varying prices.
158 Longmarket Street | Cape Town | Western Cape | +27 (0)21 426 4796

Djembe drum sessions with Andy Byskup, the Drum Motivator
British music producer and professional drummer Andy Byskup, along with a dedicated team, offers djembe workshops for pretty much any event and occasion you can think of. From a team building exercise to a djembe drum circle session, the drum motivator, who is passionate about the amazing instrument says, “Within 30 seconds I can turn someone who has never played before into a rockstar!” DrumKidz, an offering dedicated to teaching kids how to play the djembe drums is also an option- making it the perfect activity for kiddies birthdays and other special occasions.
Cape Town | Western Cape | +27 (0)21 434 7610

Djembe Drum sessions in Northern and Southern Suburbs
If you want to take your djembe drumming skills to the next level as Cape Town’s next best djembefola, drummingsa.co.za offers individual tutorials, has networks across Cape Town’s drum circle base and also offers “once-off” djembe lessons as a form of entertainment for events. Lessons are as follows:

Djembe Drum sessions with Vuyo Mgijima in Stellenbosch
After falling in love with the majestic sounds of the ‘talking drum’ ten years ago,  Vuyo Mgijima is now on a quest to spread the djembe love by offering drum teaching sessions. Taking place at South Africa’s first township restaurant theatre AmaZink Live in Kayamandi, the sessions can either be individual, or in groups, and bookings are essential. Djembe drums are available for hire during sessions.
Masitandane Road | Kayamandi | Stellenbosch | Western Cape | +27 (0)73 274 0741

HOW TO PLAY THE DJEMBE DRUMS

There are three basic tones/beats associated with the djembe drum; namely bass, tone and slap. Have a look at the video below to gain a basic understanding of these sounds.

Back from Broadway! Join this interactive drum show + wine tasting. 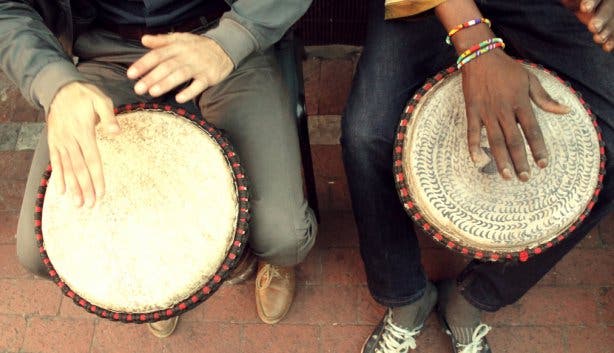 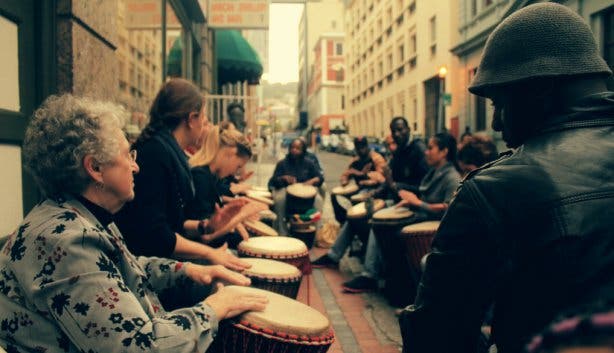 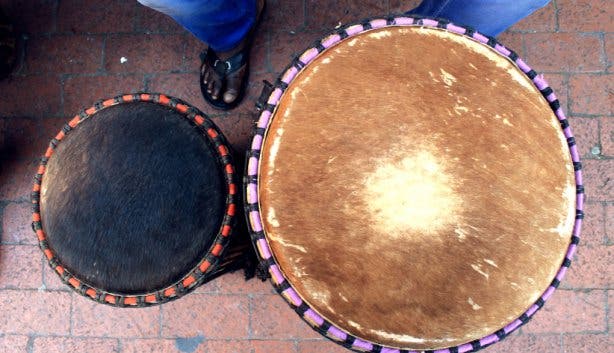 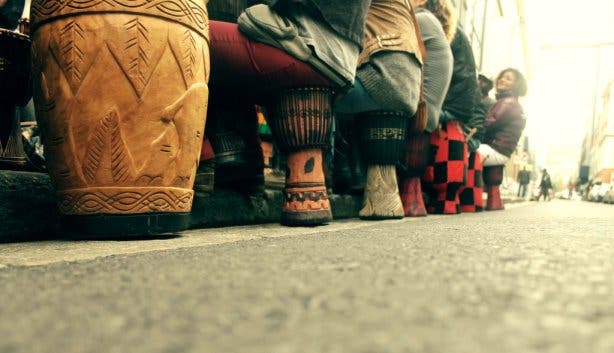 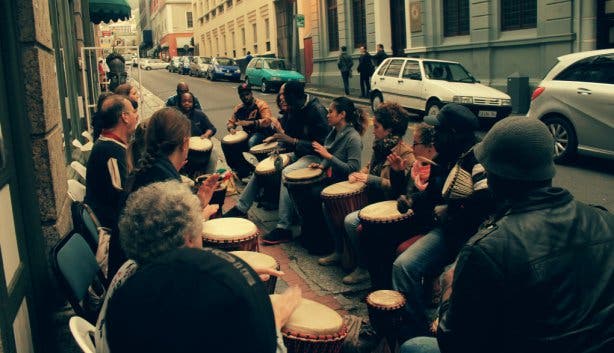 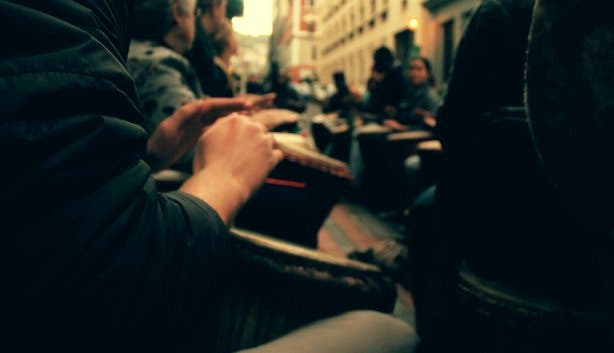