Braai with caution, eat with abandon

“Everything in South Korea starts and ends with galbi,” reminisces a slightly nostalgic Coenraad Groenewald, founder of Cape Town’s only Korean BBQ fusion restaurant and, quite honestly, the last man you’d pick out of a line-up of Asian eatery owners.

Tall, gangly, white and Afrikaans, Coenraad was most likely as much an anomaly to the nation of South Korea - where he spent three and a half years teaching English –as his Korean braai spot is to South Africans.

His eatery, open since April 2011, is tucked away down an alley entrance between Loop St and Long St in the city centre, and it’s the kind of place you could imagine would inspire a committed Cape Town cult following. All the elements are there: an off-beat, novel concept, quirky, industrial décor, a hidden location and, of course, a mouth-watering menu that features both unfamiliar offerings and South African cultural cornerstones (fire and meat).

Galbi, which literally means “rib” in Korean, has evolved to become more of a catchphrase for “going to get barbecue,” Coenraad explains. “In Korea, you don’t really drink without eating, so the galbi houses are largely social experiences.”

And though Coenraad and his business partner Louis Smit have, understandably, adapted the notion in a number of ways, their Asian fusion restaurant is, nonetheless, centred on sharing and interacting. 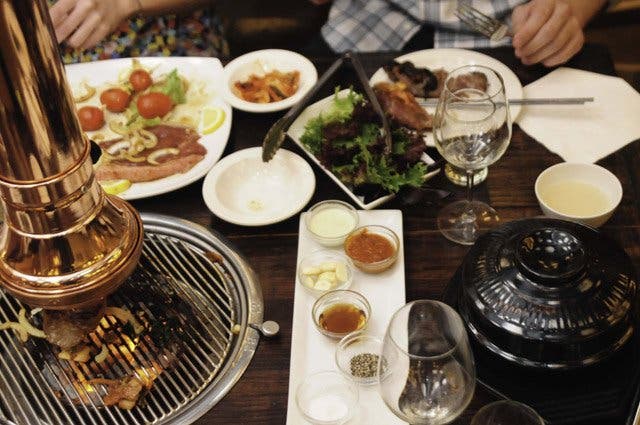 The belly of each of the restaurant’s wooden tables has been hollowed out to make space for an imported Korean grill. Copper piping and extractor fans – also of Korean origin – wind their way along the ceiling of the eatery.

Diners have fun cooking their own meat (or vegetables) over live coals. The bench seating makes for a nice gathering, as people are seated across from each other and shoulder to shoulder.

The main dishes include a hearty selection of Korean flavours and South African mainstays. Served with the main dish is the 100g portions of options like ostrich, beef fillet, Daegi Galbi (thin strips of pork belly prepared in a Korean marinade) and vegetarian skewers.

“Gun bae!” my colleagues and I say in response as we watch him bring the centre of our table to life with a medieval-looking bucket of burning embers. 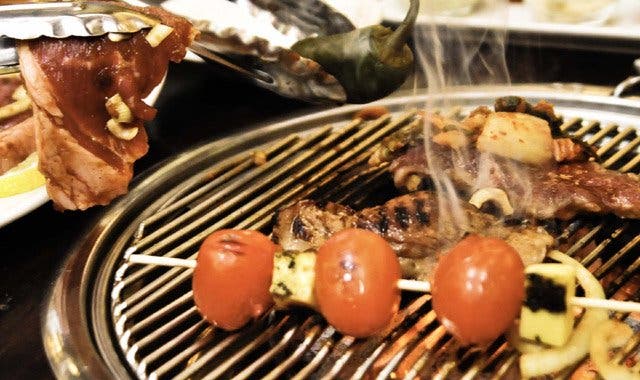 Like most South Africans, our Korean knowledge base leaves something to be desired, so Coenraad takes the liberty of ordering for us and educating us – a point that ensures you take away more from the unconventional eating experience than just a full belly. So, there’s no need to be an expert in Korean cuisine, you merely need to arrive with an appetite, an open mind and a love for the braai; though, even the most unadventurous eater will be happy to hear that there is an à la carte menu.

Next thing, a parade of meat platters rain down from the kitchen, and on their heels a wild assortment of little bowls of tasty accompaniments: Kimchi (Korea’s spicy, fermented Chinese cabbage dish), sweet potato fries with a jalapeno dipping sauce, Sigumchi (spinach tossed with garlic, sesame oil, soy sauce and sesame seeds), baked butternut, grilled zucchini and, finally, a traditional Korean Hot Stone pot of Doenjjang Jjigae – a savoury soup of Korean soybean paste, baby marrow, tofu and potatoes that Koreans typically eat at the end of a meal.

After an overwhelming minute of shock, Coenraad hands us three braai tongs and two sharp scissors intended for cutting the meat.

“Koreans share everything,” he says. “Even if you went to a Spur, they’d cut the steak into little pieces and dish up for everyone,” he explains encouraging us to follow suit.

We look at each other warily, pick up our dainty metal chopsticks (a style unique to Korea) and then, without further ado, cast the meat on the grill and get cooking.

Though a bit touch-and-go at first, the initial whirlwind that descended – a phenomenon that Coenraad pointed out is in-line with the Bali Bali (quickly, quickly) culture of Korea – slowly dissipates, and a meal as rich in banter as it is in taste comes to rest.

At the sound of the bell placed on our table, Coenraad comes rushing to us. Just like in Korea, diners can call their waiter by pressing a button, that way you don’t feel overwhelmed by the constant visit from the staff.

“Is everything alright?” he asks, a concerned look on his face.

“Perfect,” says my colleague,” I just wanted to press the button.”

Tip: Koreans typically roll their galbi into pieces of cos lettuce and then add a number of flavourful fillings. Ask about these wraps, and don’t be afraid to let Coenraad recommend a few especially foreign-sounding dishes.

The Bill: Middle of the road. While this certainly isn’t your budget Chinese takeaway, it’s also not five-star Oriental fusion. Starters range from R11 to R68, sides from R22 to R38, individual 100g portions of selected meat from R35 to R55 and sharing platters, perfect for two, range from R140 to R290.