Bocca has closed. In it now is 'FABLE' and it specialises in (spectacular and incredibly experiential) cockails.

In its place now; 'FABLE' - and it specialises in (spectacular and incredibly experiential) cockails. Fable is fabulous.

For Neil Grant, the brains behind The Old Biscuit Mill’s award-winning Burrata restaurant, food is simply what he does; it’s what makes him tick. And so, the launch of his second venture, Bocca (the name means ‘mouth’ in Italian), on Cape Town’s hip Bree Street, was not about making some grand, ground-breaking statement, but rather about spreading his deep love for cuisine further into the bosom of the city bowl.

More specifically, just like its Woodstock-based sister eatery, the new Italian spot is especially devoted to sharing the celebrated restaurateur’s passion for one particular dish: Neapolitan pizza. Originating from the Italian city of Naples, this style of pizza is quite distinct from what we’re used to in the Mother City and the process involved in creating it is, according to the owner, something of an art. Traditionally, the dough is stretched out by hand (no rolling pins are allowed) and cooked at extremely high temperatures for only 60 to 90 seconds to produce a flatbread that claims an airy, slightly charred crust and a thin, stretchy centre –it’s an option that’s novel even for ardent local pizza fans.

Interestingly though, while the eatery’s signature dish is an authentic Italian favourite, Neil and his business partner Barry Engelbrecht haven’t adopted a very traditional European approach in most other aspects. “It’s a contemporary Italian restaurant, not a classically Italian one,” he explains. “There are hints of tradition, but the focus is on giving everything a modern twist.”

One of the hints of tradition he speaks of is the hulking stone pizza oven that sits proudly as the centrepiece of the double-storey diner – it was hand-crafted by a Naples-based family and is used to prepare both Bocca’s flatbreads and its lunchtime pizza sandwiches (paninis). Then there’s also the laidback continental vibe (the new restaurant was designed to be much more informal and relaxed than Burrata) and the focus on sharing and interaction that’s typical of Mediterranean homes.

“In Italy, the mama cooks and everyone sits around the table and swaps and shares,” says Neil, “so we’re encouraging this sort of family-style dining here.”

But that’s where the references to a bona fide Italian experience end. Rather than sticking to European standards, Executive Chef Annemarie Steenkamp, who worked at Le Quartier Francais’s world-renowned restaurant for five years, has conceptualised an unusual, imaginative menu, with an assortment of innovative pizza topping combinations that are delicious, but as un-Italian as it gets – think poached egg with pancetta, pecorino, leek cream and black pepper or ginger pork sausage with kimchi, spring onions and sesame seeds, for instance. Similarly, many of the other items on the list feature very creative spins (like the spinach and artichoke risotto with vodka stracciatelle) or are entirely unexpected at an Italian eatery (like the zucchini fries or the crispy pork ribs).

And the wine list doesn’t follow conventions either. Put together by vino guru Neil himself (he’s the chairman of the South African Sommeliers Association), the extensive offering is organised by flavour and body rather than varietal (categories include ‘zesty’, ‘rich’, ‘aromatic’, ‘full’ and more), and while there are a handful of reds and whites from Venice and beyond, most stem from our own Mzansi vineyards.

What’s more, the design of the Bree Street haunt reflects the restaurant’s contemporary philosophy. Rather than taking its cue from a rustic osteria that’s coated in red, white and green, the eatery boasts a look and feel that’s sleek and trendy, with pops of blue and orange, an expansive outdoor sundowner deck and large floor-to-ceiling windows that let in lots of light and give guests the chance to take in scenes of the animated CBD streets outside.

So in this way, Bocca offers visitors a decidedly urban dining experience and a handsome environment within which to indulge your own fondness for good food.

Tip: Bocca does not take reservations, so if you want to secure a table for dinner, it’s best to come earlier, at around 6pm.

The Bill: The restaurant is not the cheapest in the city, but then you are paying for quality ingredients. Paninis range from R46 to R63, pizzas go for between R42 and R118, smaller dinnertime plates sit between R30 and R110 and bigger mains cost between R96 and R166 (sides must be order separately); the wines are specifically priced to make them accessible.

If you’re a fan of hearty Italian food, take a look at our overview of other top pizza places in Cape Town. 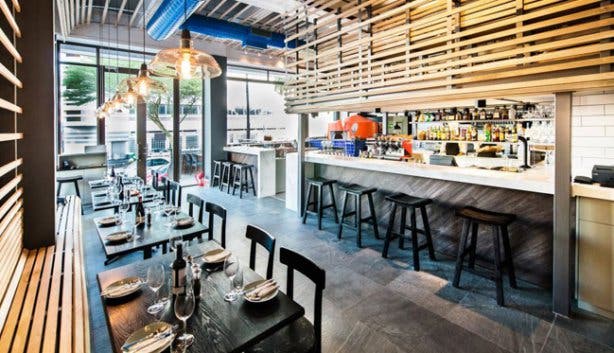