Hola poco taco (hello little taco according to Google Translate)! I’m staring at a soft corn taco piled high with twice-pulled pork, guacamole, salsa and a tiny tower of sour cream. It’s more beautiful than a Monet, more thrilling than the discovery of Tutankhamen’s tomb. I want to name my first born child Taco in honour of this fiesta of a feast. That may be the fifth tequila talking, but the emotion is real. I lock eyes with the waiter and we acknowledge our shared passion – a moment of homage to the ancient hot tamale gods – a tear trickles down his cheek, and I feel a matching one slide down my own. I take a bite of my taco and choirs of angels sing (actually it’s just a mariachi band on the CD player, but you get the point).

I have a serious love affair with molé and mixiote, which I think qualifies me as the ideal person to act as your guide to the best Mexican restaurants in the Mother City. I consider myself quite an expert on the matter, having voluntarily dined at the majority of the tequila-jug-joints in this city. 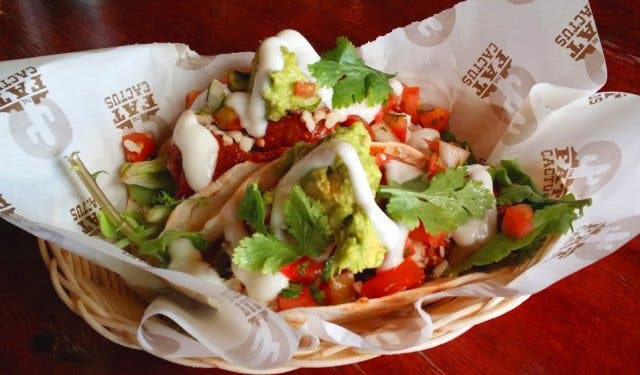 Admittedly, I am a nachos fan, which immediately disqualifies me from the ranks of die-hard Hispanic cuisine aficionados. Yes, if you weren’t already aware, nachos are not a typical Mexican dish. They came to us courtesy of the ingenuity of a Mexican maître d’ who whipped them up for his American guests as a way to stall until he located his missing chef. Later, a man named Frank Liberto sold the crunchy, cheesy corn chips at the Arlington Stadium – he perfected the recipe with the addition of a secret long-lasting cheese sauce. Today, many authentic restaurants actually refuse to serve nachos despite their deliciousness. By the way, burritos, fajitas, chile con carne and chimichangas all fall into this realm of frowned upon Tex-Mex treats. 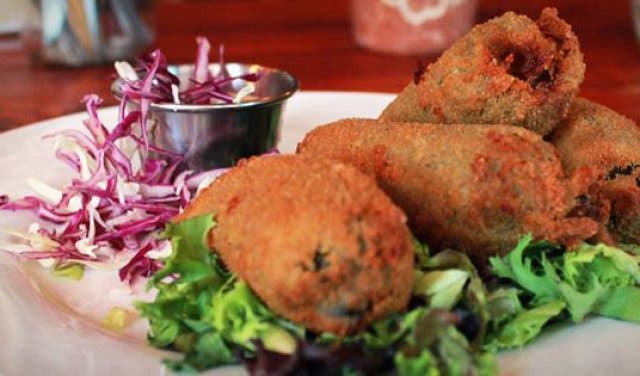 San Julian
This is my favourite restaurant and my go-to when I’m craving Tequila worms and tacos. Tucked away in De Waterkant, it’s one of the city’s lesser-known gems, which offers an assortment of delicious dishes chockfull of flavour. The Garcia family travelled from Mexico to our pretty city in 2009, bringing real-deal, eat until you squeal, top-notch authentic cuisine to the Cape. As the only Mexican restaurant owned and operated by a Mexican family (their claim to fame), you can be sure of an unparalleled dining experience. The menu is simple – starters include delicacies such as classic jalapeno poppers stuffed with cheddar, crumbed with toasted tortilla and served with smoked Chipotle aioli, and line fish ceviche with lime, red onion, green chilli, coriander, avo, mayo and corn chips. For mains, I always order the braised chilorio vampiro, which consists of toasted tortillas topped with white cheddar, guac and salsa and the most delicious marinated pulled pork. The fish tacos are super-tasty too, while the dessert is platano tatemado – a hot cake topped with roasted banana, vanilla ice cream, goat’s milk and brandy caramel. Set yourself a challenge and see if you can sample the elusive Tequila worm… you may regret it the next morning though.
Opening hours: Lunch: Monday - Friday | Dinner: Monday - Saturday: 5pm - 11pm
3 Rose Street, State House Building, Green Point | +27(0)21 419 42 33 | Average price of a main: R90 | Nachos? No | Tequila recommendation: Centinela Reposado 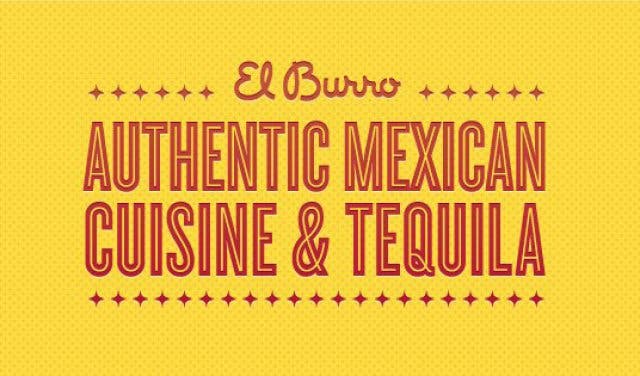 El Burro
Donkeys, sugar skulls, cacti, candles and crosses immediately greet the eye as one steps into the dark and intimate interior of El Burro in Green Point. This is the ideal venue for a celebration and the perfect place to unwind after a long day. Like San Julian, the restaurant prides itself on authenticity and starters include delicacies such as sweet potato taquitos and ceviche a la gorditas – game fish marinated in lime juice with a smoked jalapeno sauce. For mains, the chicken mole poblano is a popular choice; think tender chicken in a moreish tomato and dark chocolate sauce with almonds and spices. My favourite is the build-your-own tortilla option – the fillings are generous and varied, with guacamole, sour cream, pico de gallo, roast tomato salsa and shredded greens all served on the side. For dessert, you can’t go wrong with churros and chocolate sauce!
Opening hours: Monday - Saturday: 12pm - 11:30pm
81 Main Road, Green Point | +27(0)21 433 2364 / hola@elburro.co.za | Average price of a main: R100 – R125 | Nachos? No | Tequila Recommendation: Patron Blanco 100% Agave 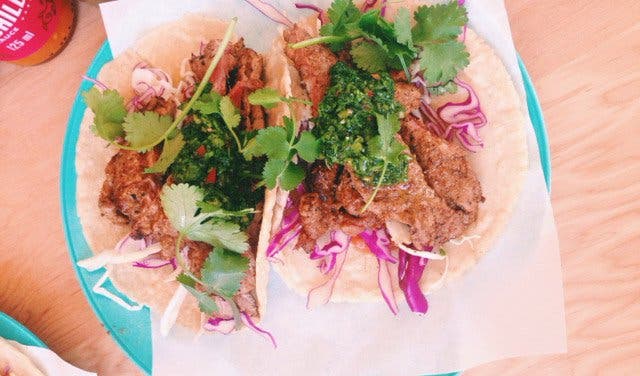 El Burro Taqueria
The new kid on the Tamboerskloof block, this cute little Mexican joint comes to us courtesy of the ever-cool El Burro crowd, and specialises in tapas versions of the restaurant’s normal menu. Chic, sweet and colourful, the décor is all about pops of colour with fresh greenery and a modern edge. Individual tacos are served on brightly coloured plates, while esquites (a warm corn salad), quesadillas and ceviche are fast becoming local lunch favourites. If you’re feeling naughty, make sure to indulge in Mexican-style hot chocolate and a cocktail or three. Granted, it is a little pricey, but quality food isn’t cheap.
Opening hours: Monday - Friday: 12pm - 11:30pm | Saturday: 10am - 11:30pm
Shop 1, 12 - 16 Kloof Nek Road, Tamboerskloof | +27(0)21 422 3554 / taqueria@elburro.co.za | Average price of a main: R35 | Nachos? Yes! | Tequila recommendation: The Tequila-based Paloma cocktail

Zapata
When I crowd-sourced favourite Mexican restaurants for this overview, Zapata consistently came up as a locally-loved top spot. Warm, hospitable and full of flair, the restaurant is situated in Claremont’s Harfield Village, and has a reputation for having the best chilli poppers around. Named after revolutionary Emiliano Zapata, it’s all about big flavours and replicating the traditional dining experience. I have to say, Zapata serves the best nachos in the city in my humble opinion – they’re topped with either shredded chicken or chilli con carne and smothered in cheese, sour cream, salsa and guacamole goodness. The deep fried ‘chimi’ is another win; it’s stuffed with Mexican rice and loaded with sour cream, refried beans and guacamole. Granted, a purist might not approve, but it’s the sort of food you just have to keep going back for, because it’s so damn good!
Opening hours: Monday - Saturday: 5:30pm until late (kitchen closes at 10pm)
2nd Avenue, Harfield Village, Claremont | +27(0)21 671 2393 / bookings@zapata.co.za | Average price of a main: R85 – R90 | Nachos? Yes! | Tequila recommendation: El Jimador Blanco frozen lime margarita

Panchos
The popularity of Panchos is testimony to the excellence of its food and all-encompassing fiesta experience – you have to book weeks in advance to secure a spot. Observatory’s darling, Panchos is all about big jugs of the good stuff, sombreros, and chilli heat that packs a punch. I know I said that Zapata make the best nachos, but I think Panchos may actually knock them off the proverbial pedestal, it’s a tough call to make – they’re both strong contenders for the sought-after title. You should also treat yourself to the marinated chicken fajitas, baked zucchini and chile con carne – it’s the whole enchilada and more.
Opening hours: Tuesday - Saturday: 5:30pm until late
127 Lower Main Road, Observatory | +27(0)214474854 / panchosadmin@gmail.com | Average price of a main: R70 – R80 | Nachos? Yes! | Tequila recommendation: agave Tequila frozen margarita jug 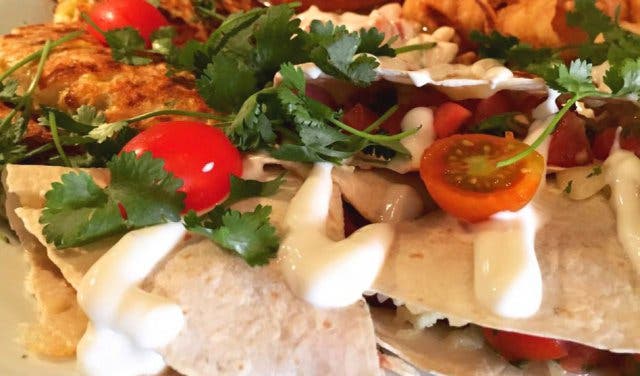 Fat Cactus
This is where all the cool kids and oh-so-hip youngsters hang out – it’s loud, proud and, generally, packed with people. There are three Fat Cacti dotted around – one’s in trendy Gardens, another’s in Mowbray, and the most recent addition to the flowering family is in the Woodstock Foundry. If you’re planning a party or Friday night drinks, this is one hot spot to taco bout. It’s nacho average joint as the focus is less on authenticity and more on creating an undeniable ‘vibe.’ If you’re out with friends, try the combo platter, which comes laden with BBQ wings, nachos, dips, chilli poppers, quesadilla wedges, calamari fritos, Amazeballs (crumbed chorizo, jalapeno and feta risotto balls) and West Coast fish cakes. Otherwise, the burgers are a firm favourite with regular diners, along with the fried soul-food chicken waffles.
Opening hours: Monday - Sunday: 10am until late
Check the website for the contact details and addresses of the individual restaurants | Average price of a main: R80 – R100 | Nachos? Yes! | Tequila recommendation: Cactus Unicorn Milk 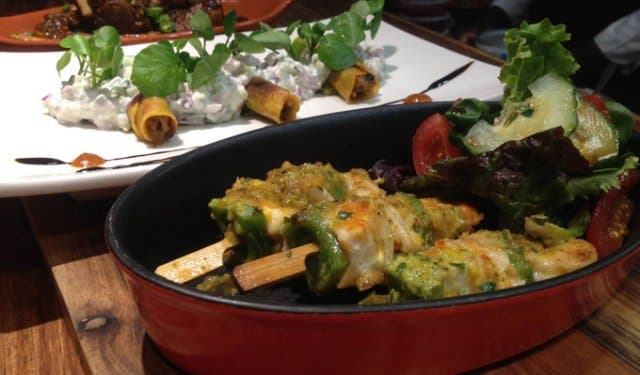 Tacoways
Described by some as ‘the Mexican Spur of Durbanville’ this family-friendly restaurant is ideal for little niños, with plenty of fun and games to keep kiddies entertained. Loaded with Latin American flavour, the menu is full of fresh, affordable options such as crispy chicken wings with Chipotle mayo and pulled pork chimichangas. Bring grandpa, bring your kids, bring your moustachioed uncle and have a ball devouring dish after dish of marvellous Mexican fare. Otherwise, you could always order some ‘tacoways’ for later.
Opening hours: Monday - Thursday: 11am - 9pm | Friday - Saturday: 10am - 10pm
12 Wellington Road, Durbanville | +27(0)21 975 5606 / info@tacoways.co.za | Average price of a main: R55 | Nachos? Yes! 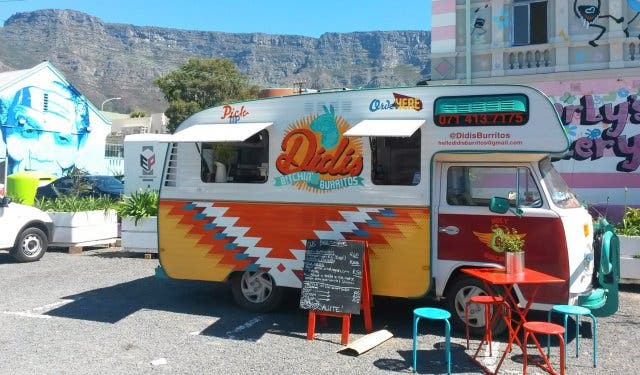 Didi’s Mexican Food Truck
I moustache you a question… Do you like food trucks? If the answer is yes, then you’re in for a treat. Didi’s Bitchin Burritos is rolling around town, delivering Mexican meals on wheels to hungry hombres. The colourful car has been receiving rave reviews from ravenous Capetonians – not least because of its menu, which boasts various burrito beauts with slow cooked pulled beef and Chipotle chicken fillings. To follow Didi’s whereabouts, it’s best to keep checking her Facebook page.
Opening hours: Always open
Always on the move | +27(0)71 413 7175 | Average price of a main: R50 | Nachos? No

Cantina Tequila
Es la hora de la fiesta! Grab your mates and get ready to break it down on the dance floor in between tucking into a selection of Tex-Mex meals. Lighting up the Tyger Valley night life, this convivial cantina doubles up as a perfect party venue, with DJs dropping beats on Wednesdays, Fridays and Saturdays, and a feisty fiesta room ideal for private parties of up to 60 guests.  Go ‘beeeeg’ or go home – the colourful kitchen serves up a selection of giant platters, including a popular rib, wing and popper combo, and a smorgasbord of fresh seafood. For dessert, keep it sugary sweet with a deep fried banana and Bar One burrito – Tim Noakes may not approve but your taste buds will.
Opening hours: Monday - Thursday: 8:30am - 10pm | Saturday: 8:30am - 11pm
86 Edward Street, Tygervalley | +27(0)21 919 1556 / info@cantinatequila.co.za | Average price of a main: R115 | Nachos? Yes! | Tequila recommendation: Mexican Chilli Tequila

There, you have it muchachas and muchachos – a guide to getting your paws on the best tacos in town. If you have any suggestions of places to add to this list, holla at us!

Stay in the heart of Greenmarket Square at the ONOMO Hotel Cape Town. Check out their Friday lunch taco special and everyday dinner specials. 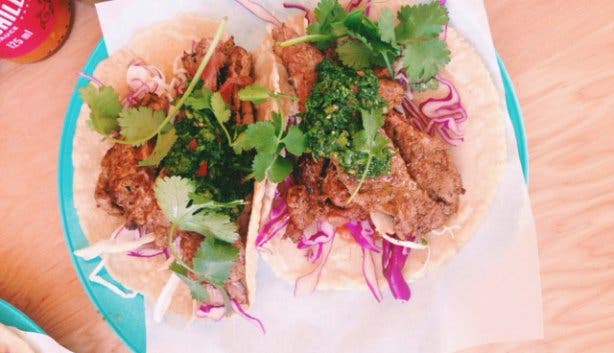 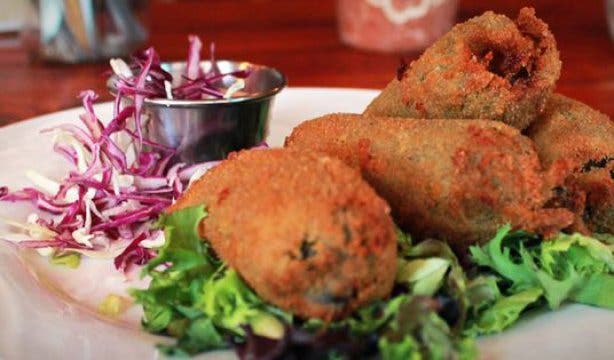 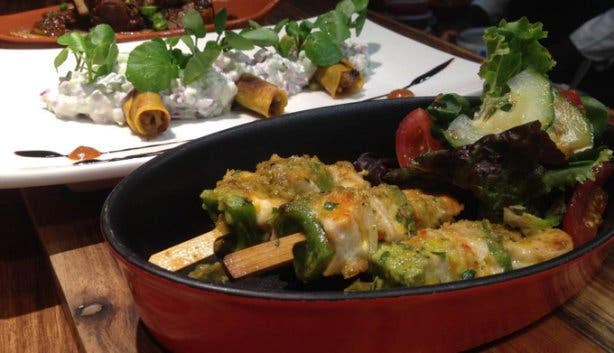 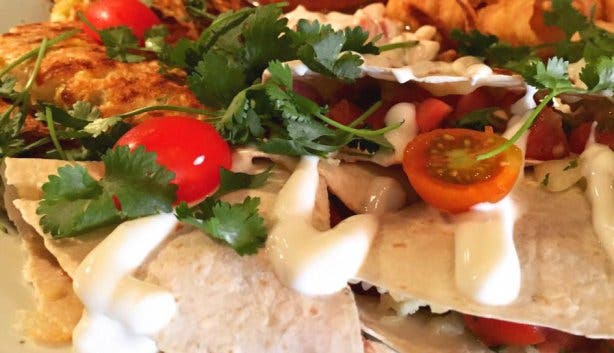 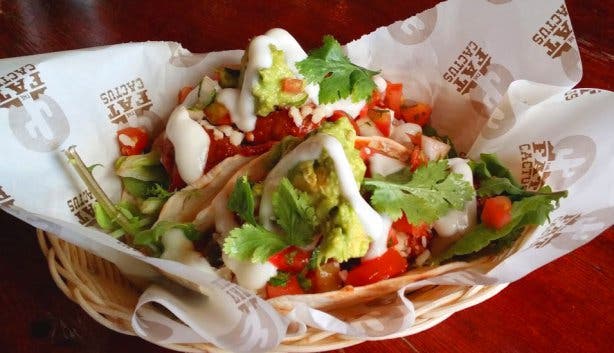 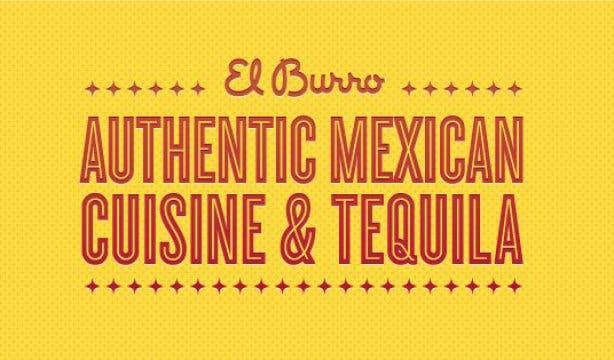 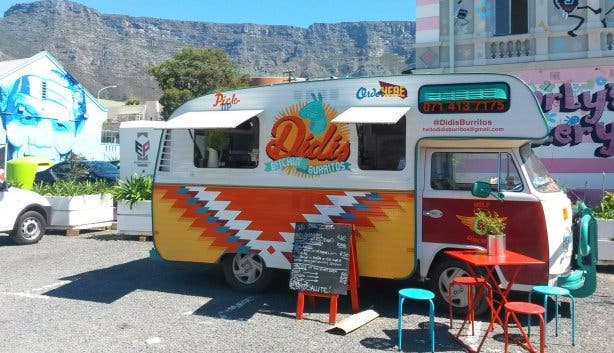