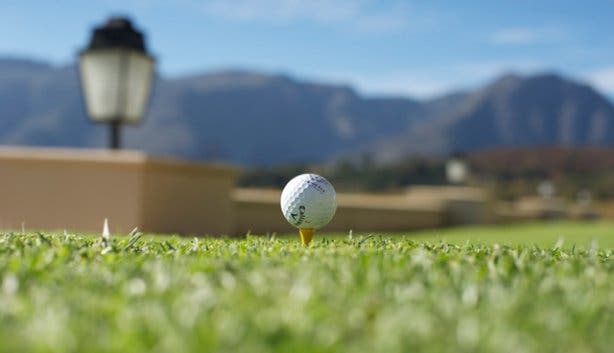 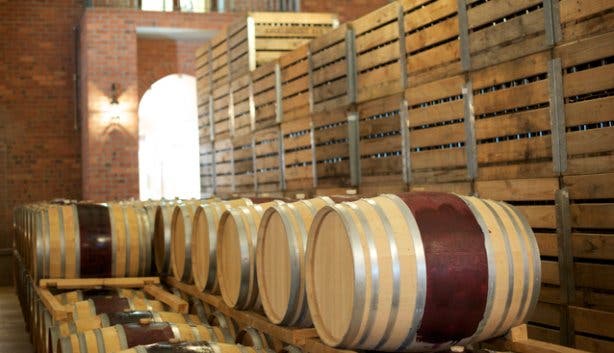 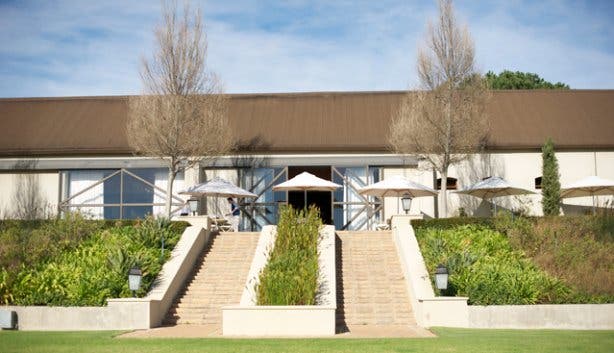 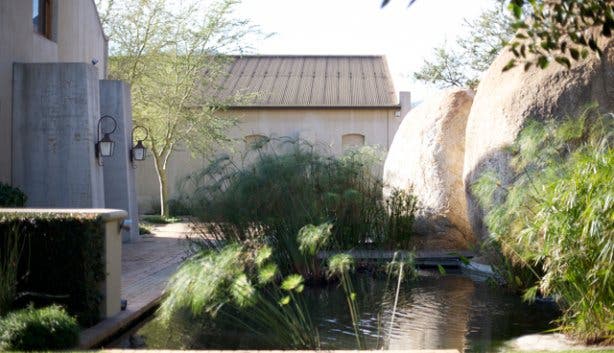 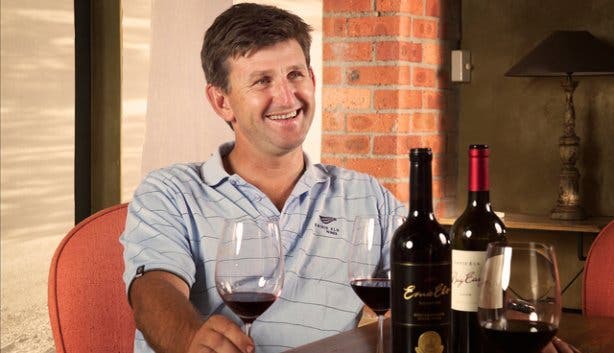 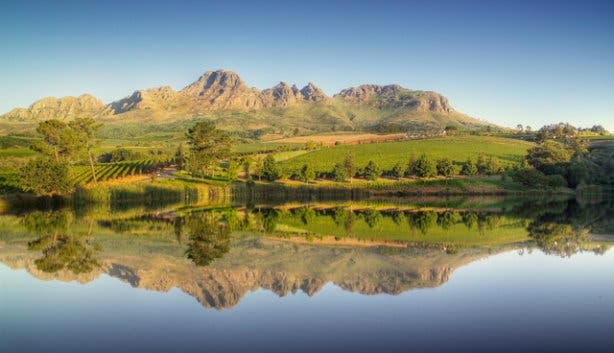 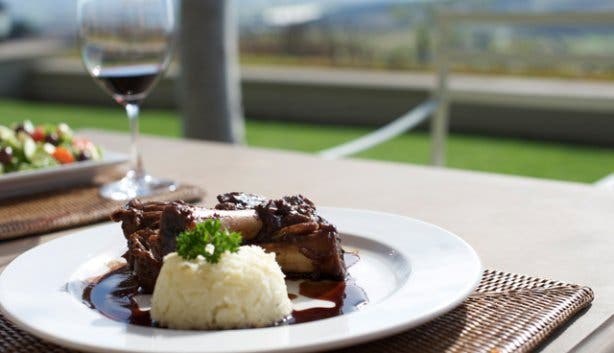 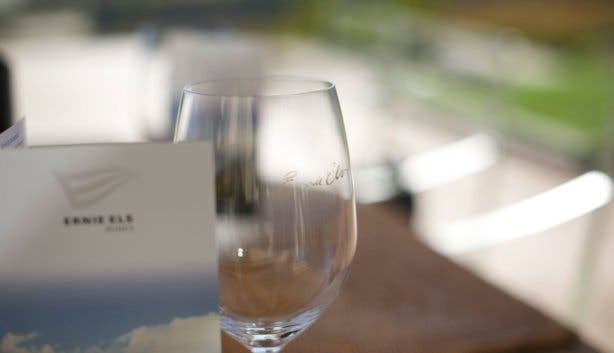 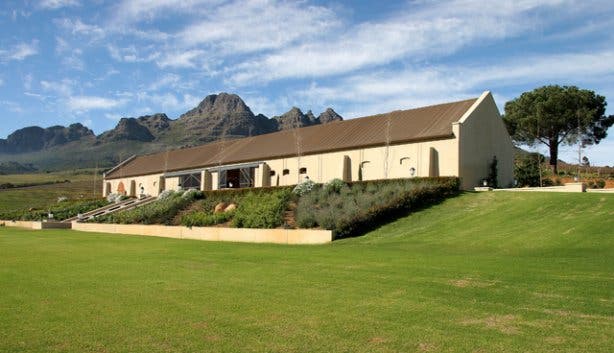 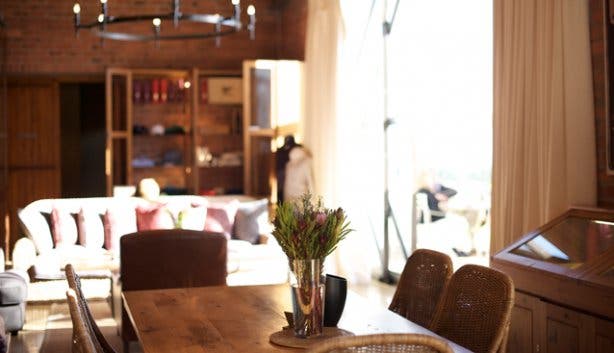 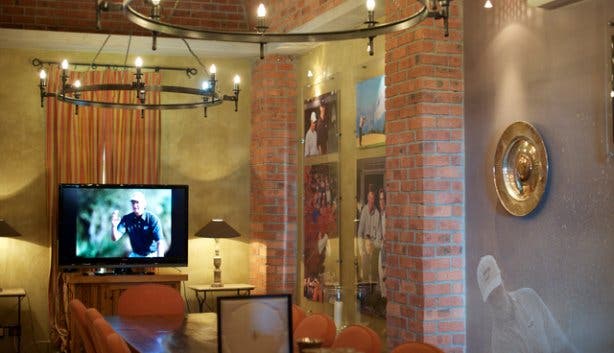 There’s nothing quite like the view of the Helderberg Mountains washed clean from winter rains; deep saturated purples and greens pop underneath the mid-morning sun.

We’re driving down Annandale Road towards this vision to Ernie Els winery, the scene unfolds like a fairytale; birds wheel in the air, red tractors move lazily through long grass, and if there were any brooks you can be sure they’d be bubbling.

Wine-y folk will tell you that the Helderberg area of Stellenbosch is great for shiraz and red wine in general. Why you ask? Well, apparently it has something to do with the granite-rich soil. The entrance to Ernie Els drives this home as it’s punctuated with large granite boulders—the kind you see on Llandudno Beach—in-between are ponds, not quite bubbling brooks, but splashy enough and filled with orange and red flashes of darting koi fish.

“The granite flakes right off,” says brand manager Duncan Woods, demonstrating by running his hands over the monolithic boulders. “You see those?” he asks pointing towards deep rivets on the stone’s crown, “While we were building the winery, we dug through the earth until the tractors hit—the grooves show just how delicate the granite is.

Not just pretty to look at though, the boulders form a secret passageway to The Library: a room under the wine cellar that houses the premium wine collection.   We enter instead through the main entrance. In a word; impressive, an arched passage leads you to the tasting area, which in turn opens up to an expansive view of the aforementioned Helderberg Mountains.

First things first, we’re off to see the trophy room. “People want to feel as if they’re in Ernie’s home,” says Duncan walking into the room. On the walls, in-between the trophies, are blown-up photographs of Ernie in impossible positions with golf clubs as well as a family portraits. (This room can be hired out for functions.)

The tasting area also has the feel of a family home, a fairly posh one true, but it’s clear that thought has been given to comfort and lounging. There’s a rough granite fireplace, easy chairs, and thick carpeting—all which beguile you to kick-back with some of the estate’s expressive red wine.

But before we get to the tasting part; Duncan wants to show us where the magic happens. Down an iron spiral staircase into the cellar we go. They’re in the process of bottling, so we have to squeeze past stacked crates. “It’s normally much neater down here,” Duncan apologises.  He shouldn’t worry; the sight of a cellar in action is a beautiful thing.

As if to emphasise this point, assistant winemaker Theo Truyts,  enters the picture, rolling a barrel and wearing a Poor Boy cap—like something straight out of a movie. Winemaker, Louis Strydom is also down here. Touted to be one of the best red winemakers in the country, he’s been with Ernie Els since inception. Before that, he was the winemaker at Saxenburg—a time he spent doing two harvests a year, the second at Saxenburg’s wine estate in the South of France: Château Capion.

When asked about this, Louis answers me sagely: “When you go overseas you don’t learn to make wine; you learn to think about wine.” With that he’s off with a wineglass in hand to taste a tank sample.

“This is the exciting part,” he says on his return, “the artistry comes in the blending process. It shows the style of the winemaker; how much he does in the barrel, the portion that’s left in the tanks...I try to keep control over everything as much as possible.

Par for the course

The elevated patio of the tasting area has a small square of green grass and down below is a sloping green lawn; making it just the spot to tee-off from.

“We have a chipping competition the last Friday and Saturday of each month,” says Duncan. “Anyone can enter.  And you can win a magnum of our flagship blend, The Ernie Els Signature.”

The focus here is on red wine, and there are six to try. Duncan tells me that they’ll be launching two white wines soon called Big Easy white, a Chenin Blanc, and the Ernie Els Sauvignon Blanc.

Also named The Big Easy, is the entry level red blend. It’s predominantly shiraz (55%) and cabernet sauvignon (20%), but there are also smaller amounts of grenache (10%), mourvèdre (10%) and viognier (5%). The reason for my listing of these percentages here is that legally winemakers can put up to 15 percent of other varietals in a wine and still label it as a single varietal.

“I’m transparent with the blend, because I want people to see the puzzles I work with,” explains Louis. “Big Easy is Ernie’s nickname, and we needed to make a wine that stylistically worked with the name. Like Ernie, it’s big in nature, but it has soft, easy fruit, just like his gentle character.”

“This wine is a photograph of the estate for that year,” says Louis. “There is no constant in wine. Nature’s not set in stone; we work with it, not against it.”

A blend made of all the grapes grown on the estate, Louis calls it a ‘property driven wine’ rather than bandying about that word: terroir. And it’s my favourite of the bunch. Deep cherry flavours supported by the sweet and smoky shiraz contingent.

“The cabernet franc is the accountant of the bunch,” says Louis. We’re getting philosophical now. “It keeps the other varieties in line.” I’m swirling the mauve liquid in my glass peering at the equally purple mountains behind it. After a few tastes I can identify the ‘accountant austerity’ he’s referring to.  “The others like the petit verdot and malbec are more fruity, easy-going—they’re the marketing department,” Louis finishes.

Duncan laughs at this, “guess that makes me the petit verdot.”

We’re onto our last wine now, the estate’s flagship; Signature. “This was the first wine we produced,” says Louis. At R550 a bottle, it’s definitely a luxury item. Duncan and Louis are keen to change the perception that Ernie Els Wines only cater for the super-premium market; the rest of the range is a lot more accessible, the Big Easy and the Ernie Els Cabernet Sauvignon to name two.

Adding to this Louis says: “Lots of people work from the bottom up; we worked from the top down.”

“How about some lunch?” asks Duncan. Soon we’re poring over leather-clad menus. It’s a fantastic offering with a focus on meat dishes (red wine is the draw card here after all). We decide on lamb shanks served with a red wine jus, and my partner a grilled beef sirloin. The prices are decent, especially considering that all meals are served with a complimentary glass of the Signature.

While we’re waiting the discussion turns to having a wine branded by a famous sportsman, does it help or harm sales? “Look,” says Louis, “it certainly does help, but at the end of the day the wine needs to back it up.”

Tucking into meltingly tender lamb shank paired with the Proprieter’s blend, and that rain-washed mountain for a view. I have to say, that not only do the wines hold their own, but the Ernie Els experience is truly something else.

Tastings cost R30 for the full range of six wines. For a more intimate experience book the private tasting room underneath the cellar adjacent to the ﻿vinotèque and have your every whim catered to; this includes full catering. It seats a maximum of 8 people. A rather fun way to have that meeting...﻿