A look into the Mother City’s mushrooming supper club movement

A photography studio may be far from your average place to dine, and joining a table of complete strangers for supper may not be considered all that conventional, but for Cape Town locals Marisa Hendricks and Kathryn Sharfman, such options are about as standard as bread and butter.

These two lovely ladies, both of whom are just regular Mother City citizens, are patrons of the pop-up dinners concept, a budding movement that sees temporary ‘restaurants’ appear in intimate, unusual locations typically for one evening only.

Long a fashionable phenomenon in major world cities like London, Berlin and New York, the trend, which took root in Cape Town in 2010, has exploded in popularity in more recent years, bringing with it a hefty helping of intrigue, exclusivity and unpredictability.

“What appeals is the sense of mystery and the element of surprise,” explains Digital Marketing Consultant Kathryn, who first discovered the local underground dining venture SecretEATS online (to keep things a little covert, most dinners are only advertised to the public via social media and word of mouth). “It’s a chance to go to a new unexpected venue, where you don’t know who will be cooking for you or who you’re going to meet.”

Naturally, the social aspect is a key highlight of these transient food experiences. As most of them invite guests to sit at one long communal table, they offer a rare opportunity to connect with other like-minded individuals, to make new friends and work contacts and to avoid the dreary prospect of spending yet another night eating alone (especially appealing for lonesome business travellers or those new to town).

More aptly though, it’s the fleeting, here-now-gone-tomorrow nature of supper clubs that’s one of the greatest drawcards. There’s certainly much excitement in the knowledge that, like visiting circuses that materialise mysteriously and then disappear in a cloud of smoke and sweet memories, pop-up eateries offer an experience that you’ll never quite be able to have again.

“Every dinner you go to is completely different,” exclaims Marisa, who, being an avid supporter of a secret restaurant project called Slippery Spoon, has enjoyed everything from a plastic-themed supper in an industrial kitchen in Woodstock to a rustic seafood feast in a private villa on the beach in Langebaan. “The only consistent thing is that the food is always amazing.”

And, by the sounds of it, it’s usually even more than just amazing. Because chefs tend to use such events as opportunities to showcase their talent, experiment, push boundaries and let their inner creative run wild, the imaginative menu, which typically features at least three mouth-watering courses, is often nothing short of extraordinary (Marisa, for instance, has been served creative dishes like tuna tartare boerewors, mozzarella balloons filled with tomato foam and mussel bobotie).

Needless to say, the core concept may be ephemeral, but, with all of the delicious intrigue and full-flavoured novelty it promises, the trend is (hopefully) here to stay. To give it a bit of a push, and to shed a little light on a local underground scene that’s still evolving, we’ve gathered together a collection of a few Cape Town-based pop-up dining concepts paving the way forward in the world of out-of-the-box culinary experiences.

SecretEATS
Exclusive underground dining project SecretEATS was launched in March 2013 by New York native Gregory Zeleny, who was shocked to find that creative, food-focussed Cape Town had not yet fully cottoned on to the global supper club concept. With mystery as the central premise, the founder sources unique settings (anyone can offer to host a dinner in their home or special venue) and talented up-and-coming or established chefs to craft exceptional once-off food and wine adventures. Those lucky enough to be on the rather limited (30 to 40 people) guest list are only informed of the location on the day via sms, and the mouth-watering multi-course menu is only revealed as the dishes are served (though, there might be a few cryptic clues on social media beforehand); essentially, it’s like one big super social grown-up game with ingenious fare as the focal point. As a highlight, diners are almost certain to leave these secret events with new friends and typically have the rare opportunity to sit and share a glass of wine with the gifted individual who cooked their meal (another plus of most pop-up dinners). SecretEATS coordinates one to two underground suppers a month. To secure an invitation via email, simply sign up on the venture’s website (Thesecreteats.com) and be sure to book and pay for a seat immediately so as not to miss out (once the invite has been sent, events tend to sell out in a matter of hours). 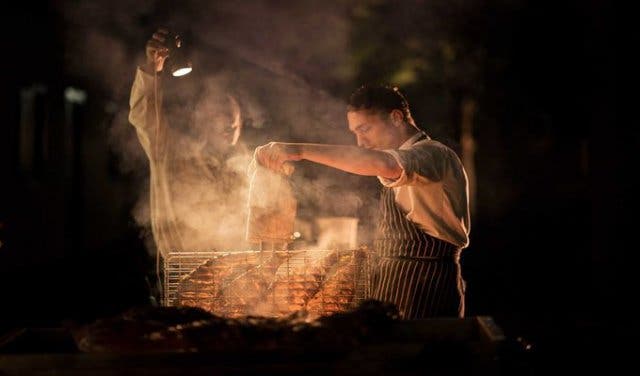 Slippery Spoon
The ultimate dinner party host, local visionary and wedding coordinator Johnny Hamman founded this ingenious pop-up restaurant concept in an attempt to find expression for his passion for creative cooking outside of the confines of a typically militant professional kitchen. Needless to say, other-worldly fare is the star of the show at every underground event this talented chef holds (there’s one every two or three months). Each dinner features an unusually themed menu – think ‘plastic fantastic’ or ‘the 10 commandments’, for instance –  and takes place in an obscure location (Johnny’s hosted suppers everywhere from pottery studios to old cathedrals). In this way, guests get to experience both a new, exciting venue and an array of dishes they’d perhaps not normally try. What’s more, the ingenious cook is intent on getting to know his diners, often prepares the food right in front of them and is always happy to explain the inspiration behind each meal. Far from your average dining option, Slippery Spoon is, as its creator says, “like going to the theatre, but getting fed at the same time.” Locals can find out about suppers on the pop-up restaurant’s Facebook page – events are advertised about two weeks in advance – or by word of mouth.  Though some element of surprise is maintained, guests are told certain details, like the location, theme and number of courses to be served beforehand. 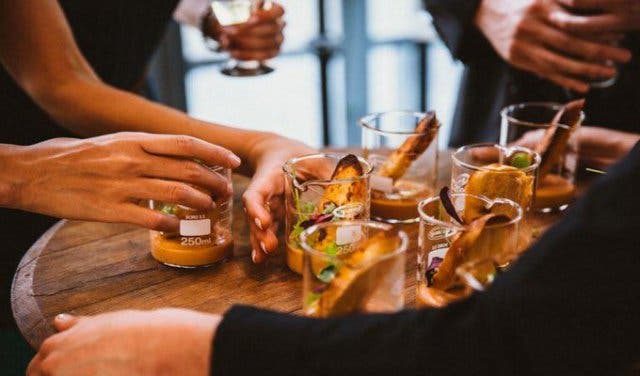 Supper Lounge
The project of German-born Katrin Starzmann and Elli Gorgievska, both of whom were privy to the covert dining culture overseas, Supper Lounge started as a platform for connecting existing Cape Town pop-up restaurants and promoting their events. Since its beginnings though, the venture has expanded to host its own regular themed supper club, Mother’s Kitchen, as well as the odd unique dinner event focused around a specific creative topic. The Mother’s Kitchen occasions invite anyone interested (even amateur cooks) to open up their private home to strangers and prepare feasts that offer a taste of their childhood and country of origin (if foreign). The experience is intimate and homely, and the focus is as much on meeting fascinating new people as it is on indulging in a one-night-only food journey. These short-lived events, as well as all the others organised or advertised by Supper Lounge, are featured on their website (Supperlounge.com) along with details about the venue, chef, menu and other guests (secrecy is not so central to this concept).  Those who sign up on the site will receive newsletters notifying them of suppers, but interested parties can also follow their movements on Facebook and Twitter. All booking and paying (dinners average around R250p/p) can be done online. Importantly, as Supper Lounge draws many local pop-ups together onto one portal, keeping an eye on this venture is probably the easiest way to stay on top of the underground scene. 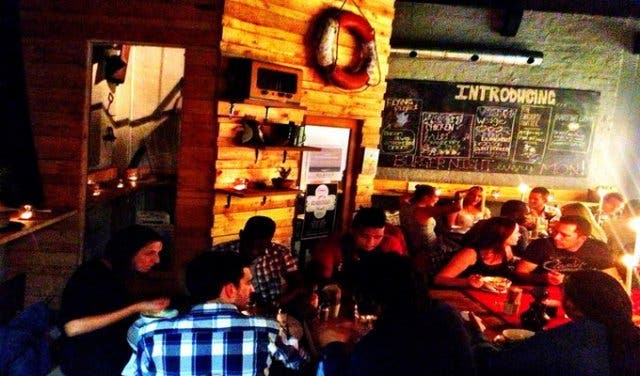 Outlandish Kitchen
The brainchild of Zimbabwean-born food stylist and writer Jules Mercer, Outlandish Kitchen is a pop-up concept that aims to reconnect diners with their food source by offering what the founder calls ‘a far flung field experience’. One-day kitchens are set up out in the middle of nowhere on the small-scale Cape farms that cultivate many of the main ingredients (free-range eggs and pasture-reared beef, for example) used to make the meal of the day. In this way, patrons of these lunch or dinner events get to interact directly with the producers of their fare – farmers attend the events and talk guests through their ethical philosophies – and can dine right on the land that gave rise to their delicious grub (all cooked by local chefs). While the emphasis is on raising consciousness about what we eat, the pop-ups also aspire to encourage guests to try foods they wouldn’t normally (like roasted marrow bones and smoked chuck). Not to mention, all diners (there are usually spaces for between 25 and 50 people) are seated at one long table, so the ambience is always festive and strangers almost always leave good friends. Daring foodies can learn about future happenings by checking out Outlandish Kitchen’s Facebook page or by emailing Jules at jules@outlandishkitchen.com; the ever-changing experience costs around R550p/p and includes a five- to six-course feast and free-flowing wine. 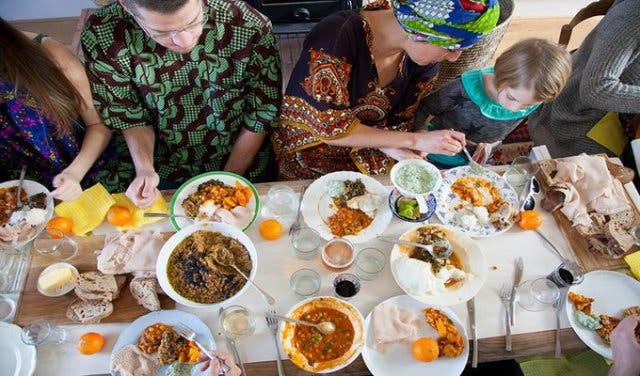