You can take everything away from South Africa, but you can’t stop us from dancing

Your government promises you a permanent home and to reduce the crime rates in your area, yet fails to deliver on that promise. You want things to change, but you have neither money or weapons. How do you make yourself heard?

When you muster all of your energy to cry out: ‘Power!’, you discover that you are not alone. A crowd struck with the same emotions and grievances respond: ‘to the people’. When more people hear you, the crowd gathers strength, beating out a rhythm with their feet as they march.

Toyi-toyi is the war dance of black South Africans, which dates back to the Mau Mau people in Kenya, who rose against the English colonialists. It is a fine example of South Africa’s rare spirit in the face of impossible conditions and abject poverty. From protests to celebrations, the chants capture the emotions of joy, pain, encouragement, heartbreak and solace. Toyi-toyi is a powerful and infectious statement, by which the oppressed may voice their grievances to the government.

“Even though South Africa has 11 official languages, toyi-toyi could be considered the 12th, since it’s nearly as old as the country itself and everyone knows it, including the government.” - a resident of Orange Farm, South of Johannesburg.

During Apartheid, toyi-toyi symbolized the triumph of spirit through song and dance, against one of the worlds most oppressive state apparatuses. The chant ‘Amandla’ was a popular rallying cry. Widely regarded as the trademark of African National Congress (ANC), this is a Xhosa and Zulu word that means ‘power’. The leader would cry out ‘Amandla!’ and the crowd would respond with ‘Awethu’, which means, ‘to us’. This would complete the cry: ‘Power to the people!’. ‘One Settler, One Bullet’, was a cry used by party members of the Pan Africanist Congress (PAC) (a Settler was, at that time, defined as a white person participating in the oppression of indigenous people).

The toyi-toyi is quite a marvel to watch. Throngs of people charge forwards, stomping and chanting political slogans. Such energy struck fear into the hearts of the armed forces who tried to contain them. But toyi-toyi was also a distraction from fear during the marches because people knew that later, once the crowds had dispersed, they would suffer harassment at the hands of police.

“Most of the riot police who had to contain those marches were shit-scared of the chanting blacks confronting them. Here was an unarmed mob instilling fear just by their toyi-toyi!” – a former riot police commander, interviewed for the documentary, ‘Amandla! A four part harmony’, 2002.

From the grass roots up, toyi-toyi has also been instrumental in the lives of many political figures and musicians such as, Hugh Masekela and Miriam Makeba. On 2nd May, 1994, the leader of the ANC and newly elected president, Nelson Mandela, stood before his supporters at the Carlton Hotel in Johannesburg and declared that South Africa was ‘free at last!’ Before his speech was over, supporters across the urban streets, the townships and the rural provinces had already erupted into toyi-toyi. Mandela could not contain himself – his tireless struggle against Apartheid had paid off, so he danced jubilantly and hugged his well-wishers.

“This time we will fight and toyi-toyi like the ANC taught us,” – Vusi Nkosi, a resident of Mamelodi-East, Pretoria.

Post-Apartheid, people have used toyi-toyi to express their grievances against current government policies. The trade unions use toyi-toyi during their mass meetings and protests and it has regained momentum amongst poor peoples movements. Independent social movements such as, Abalahli baseMjondolo (AbM) and the Anti-Eviction Campaign use ‘Amandla Ngawethu’ (Power to the poor people), during their anti-government and anti-political protests. The chant can begin and end a speech, or let the crowd know when a speaker has something important to say.

The Western Cape Anti-Eviction Campaign was formed in November 2000, to combat housing issues and to oppose police brutality. In November 2009, two Mandela Park (Khayelitsha) residents were assaulted by four Chippa security guards at the instruction of a local SANCO chairperson. When one of the residents, Khaya Xintolo, went to the police he was the one that was arrested, for allegedly intimidating the security guards. In response, more than 300 residents took to Mandela Park, toyi-toying. The protest was not just to highlight intimidation against community activists, but also to air grievances about the housing crisis in Mandela Park.

AbM, started in 2005, is not only the largest shack-dwellers association in South Africa, but is also widely regarded as the most effective. The organization focuses on improving the living conditions of the poor. In March 2010, residents of Mamelodi-East, Pretoria, threatened to disrupt the 2010 FIFA World Cup. The government had promised residents, as far back as 2000, that they would be given permanent houses and land of their own, yet had failed to deliver on that promise. Protesters demanded that the government immediately supply the 6000 living in 7 squatter camps with houses and basic services. They were met with violence from the police.

“It’s ten years later and we’re still in the same position. All they do is send police to come and shoot at us,” – Veronia Mhaphelele, a community leader in Mamelodi East.

Ten years of waiting turned to violent protest. Residents stole, set fire to tires and threw rocks at passing cars. This is not an isolated example. The PAC have since distanced themselves from their chant: ‘One Settler, one Bullet’. The rallying cry was only ever meant to define a white person who oppressed the indigenous people, but it has since been taken out of context. Some grass roots sympathizers of the PAC have taken it to define all white people and have used the chant to leverage violent attacks.

Toyi-toyi unites those who share a common belief and can be either constructive or destructive. It is charged with emotion, from joy to despair. Toyi-toyi can be a fight to the right for life, or the jubilant dance of celebration. Those that march may not have money and they may not have guns, but this is as powerful a weapon as any.

Have you ever wondered what the deal is with gumboot dancing or ubuntu? Be sure to check out What's the Deal With...? for more information. 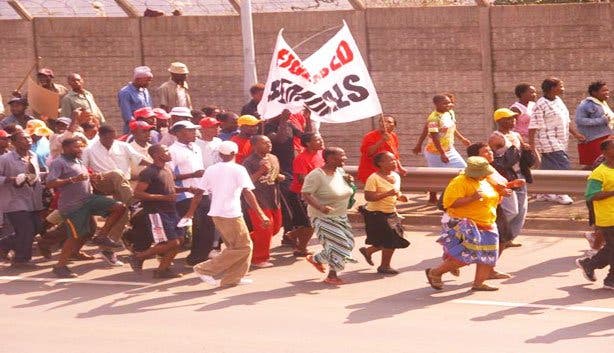 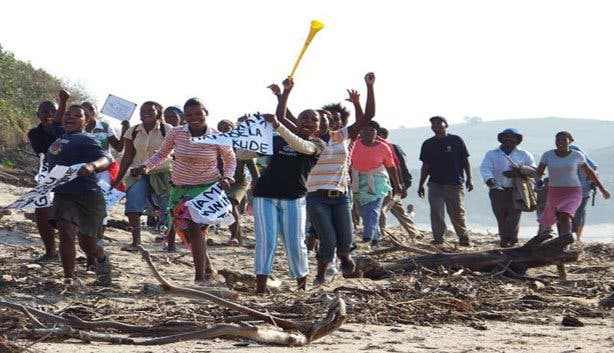