Erf 81 is a historic gem in Tamboerskloof. Volunteer at the foster farm, work in the Tyisa Nabanye garden or visit the Sunday market to make a difference. 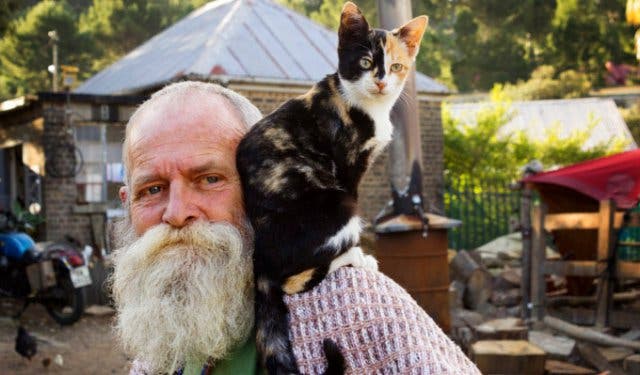 The first thing I notice when I meet Andre Laubscher from Erf 81 (the erven number of the defunct military base) is his twinkly eyes.

The next thing is his beard, and then I get distracted by his kitten; she wanders up to me as bravely as any pint-sized lion and tries to climb my leg with an obvious sense of entitlement to strokes.

She leaps across from me to Andre and scurries up to his shoulder where she perches like Polly the parrot-kitten. I’m kitten-smitten in minutes and I’m also quite taken with the whole farm. It’s quite a revelation to me that in the middle of my Tamboerskloof neighbourhood, there’s this chaotic oasis of land brimming with creatures, from miniature frogs to ‘guard geese’, chickens and more.

Despite the fact that I simply wandered onto the grounds unannounced, Andre is warm and open – it’s almost like he’s been expecting me, which isn't surprising considering the number of volunteers who come to the site to assist every week. I ask him to share how he came to be on the farm and he tells me it’s a long tale and apologises in advance for being a ‘mumbler.’ Ironically, I find him to be a delightfully articulate storyteller and listen with astonishment as the story of the farm unfolds. It involves a python, two dwarf goats and a baby. 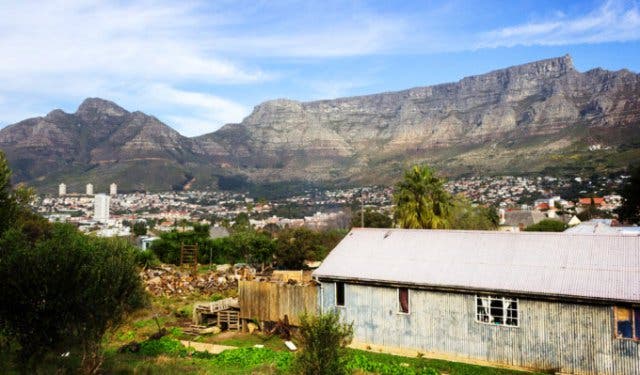 CHAPTER ONE: THE HISTORY OF ANDRE AND ERF 81

Andre was living in Park Road when he began a career in the local movie industry and, despite misgivings, agreed to do an advert about tyres, which bizarrely led him to the zoo where he wanted to take a picture of a python for the ad.  He managed to find said snake at the Tygerberg Zoo, where he also found a llama. Having decided that the llama would, unfortunately, not fit in his car, he impulsively settled for two dwarf goats instead, and bought them home to live with him in his red brick house in Park Road.

When foraging for graze land for his goats one day, Andre happened upon Erf 81 – an abandoned military base with plenty of vegetation for his hungry pets. He kept returning to the site and, in 1994, he volunteered to live there as an unpaid caretaker. Despite incidents with policemen and government officials, he eventually was permitted to move in and he became the custodian of all the critters living there in January 1995. He fell in love with all the small animals scurrying around, and when the rain fell and he heard the frogs for the first time he knew he couldn’t leave.

After Andre had been there for a while, a stranger arrived and asked him if he could take in a human baby. The child’s parents were alcoholics and there was no one else to look after him. Andre said yes. He took in the infant and this led to the farm temporarily becoming a foster home and place of safety for other abandoned and neglected little ones. The concept of a foster farm developed from there. According to Andre, “It’s incredible how animals and a safe, wholesome environment can help heal damaged children. If I had my way every public park would be foster farm for children and animals in need.”

Andre has faced many challenges in his journey thus far, but he tells me that every time something bad happens and he starts to despair, something else amazing always occurs to lift his spirits, give him direction and restore his hope. 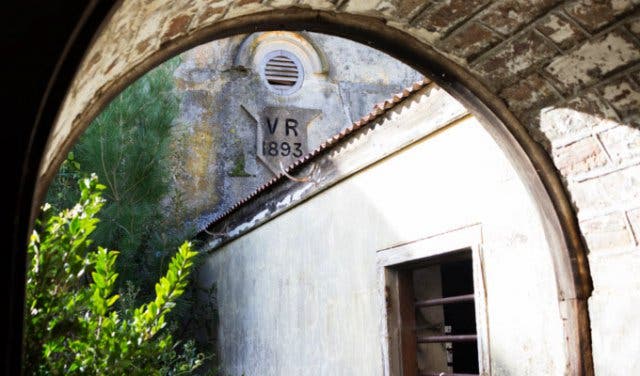 CHAPTER TWO: LILITH AND THE LIBRARY OF ALEXANDRIA

We’re walking towards Andre’s studio at this point, and we turn and duck into a beautifully decrepit 1893 building once used to house magazines and artillery, with an arch window I’m immediately drawn to. Andre leads me down a passage and I realise that this labyrinth is far bigger than I thought. It’s a rabbit warren of rooms, in one of which we find Dirk, an artist who works on his wire sculptures in the gloomy romance of his high-ceilinged studio. Outside this room, Andre shows me his sculpture of Lilith, based on Robert Grave’s White Goddess.

Weighed down by keys, chains and other paraphernalia, her proud head is adorned with a leafy crown and she seems happy in her position as queen of the corner, with a tiny red donkey as her third eye.  She’s the perfect addition to the passageway and I love her instantly. Next we wander passed a room full of wooden crosses complemented by the Library of Alexandria (based on the Ancient Library of Alexandria in Egypt, which was one of the most significant libraries of the ancient world, dedicated to the nine muses of the arts), which holds a selection of blackened smoke-damaged books – the survivors of the fire that burnt down the farm library many years ago. 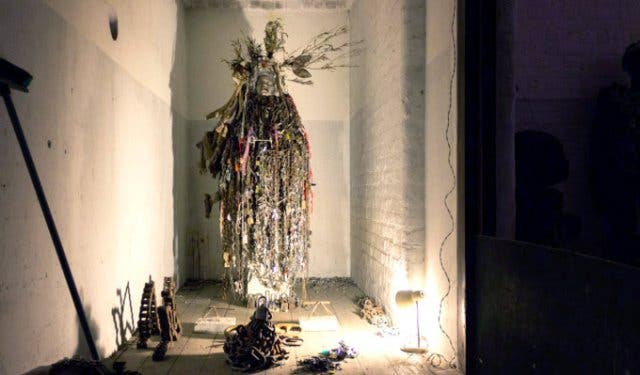 There’s another room full of boxes of things that Andre has hoarded over the years – I catch a glimpse of an ancient manuscript next to an oven glove, a wooden mask and a brilliant gold mannequin. It’s rare that I find myself in such a visually rich and mythical environment, and it’s quite clear that Andre is an artist as well as a farmer and storyteller. The farm is a living, working art exhibition, and, as a painter, I’m in heaven.

Back outside, we head to Andre’s beloved frogs. There’s a small garden with a red brick shed and an array of little ponds housing duck weed, tilapia and tiny toads of all descriptions. The frogs sing softly in the background, and Andre urges me to nibble on a flower stem as he tells me about the work that the farm volunteers have been doing recently. Many people have fallen for Erf 81, and have taken it upon themselves to come and assist in whatever way they can. It’s a tough and tiring job looking after such a large plot and help is always warmly received. If you want to volunteer, the best thing to do is to coordinate with Tyisa Nabanye or simply to wander onto the farm and ask Andre what you can do. 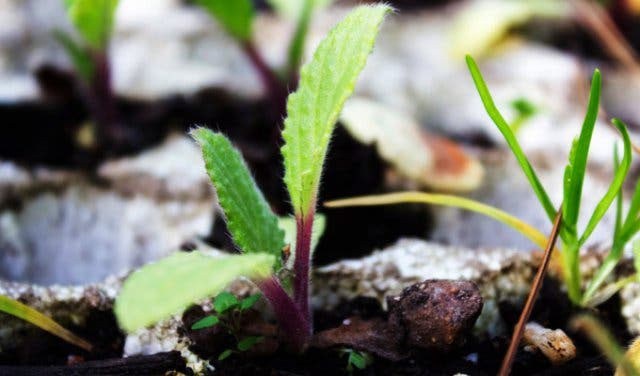 Tyisa Nabanye is an urban agriculture NGO that runs independently from Andre’s animal farm on the upper slopes of the plot. The primary aim of the organisation is to grow vegetables and herbs using sustainable permaculture farming methods to stimulate food security and foster job creation. They’ve transformed the upper hills of the old Erf 81 military base into an organic vegetable garden and indigenous nursery, and some of the produce is sold at the market, which was founded to give entrepreneurial opportunities to young people who don’t have access to traditional markets or shops, and so have to seek alternate means of making a living. 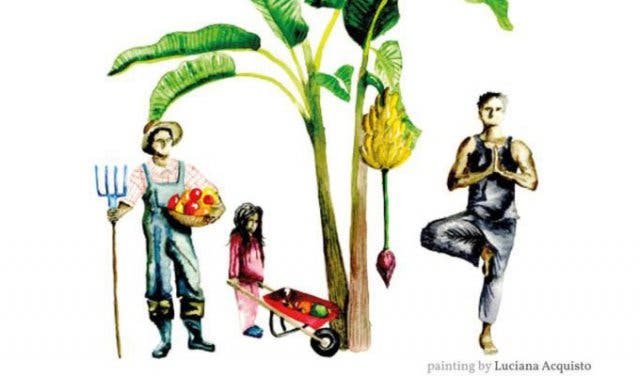 If you’re a CBD local then you’ve probably heard of Tamboerskloof’s favourite new market, which Tyisa Nabanye hosts on Sundays.  If you want to help out then pop over to the market for breakfast with magnificent Table Mountain views, or volunteer to do a spot of gardening every Wednesday and Thursday. There are regular planting, workshop and fundraising days, so keep an eye on Facebook for ways to get involved. 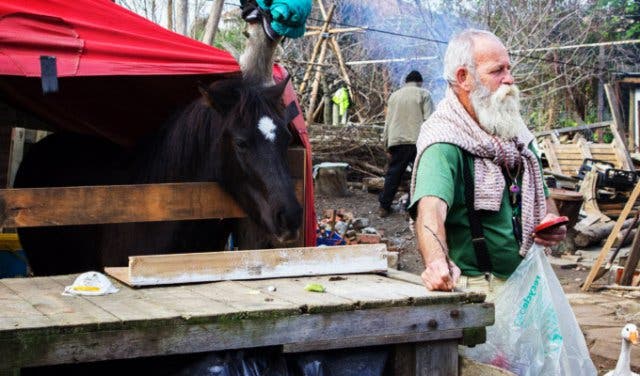 Polly the kitten is back on Andre’s shoulder, and he’s stroking her absent-mindedly while his beard glints majestically in the last rays of the day’s sunlight. I feel so at peace at the farm, I don’t want to leave. I ask Andre what’s next and he smiles and tells me he plans to include Erf 81 as a highlight on the First Thursday’s calendar. I personally think it’ll be a hit. I thank him and reluctantly start walking home – I suspect I’ll be back to do some gardening with the frogs soon. 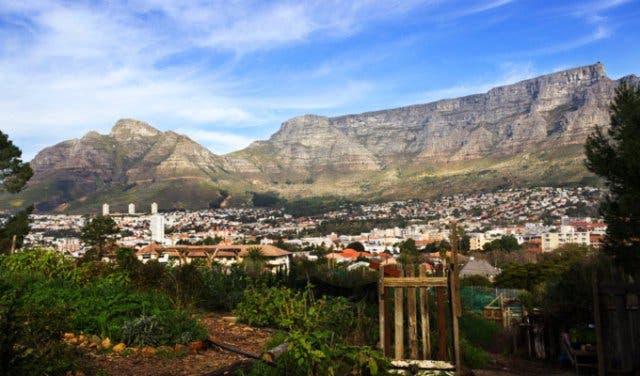 Erf 81 is, once again, under serious threat as the residents face possible eviction. On the fifth of August 2011, the long standing court battle between the Public Works Department and the residents of Erf 81 culminated with the magistrate deciding in favour of the department and giving Andre and the other tenants three months to vacate the premises. Andre’s attorney advised the Erf 81 residents to appeal, but the courts got busy and the matter was laid to rest for a time. Now, four years later, the Erf 81 tenants have been ordered to appear in court once more and the threat of eviction is imminent. There is currently a fundraising drive to raise money for their appeal – in one weekend, R10 000 has been raised, which just goes to show how important Andre and Tyisa Nabanye are to both local and overseas supporters.

There is something very important at stake here – not just the wellbeing of Erf 81’s animal and human residents, but also a principle. This is a place that is of much significance to so many people. Andre’s foster farm has done an immense amount for the community in terms of being a place of shelter, productivity, tourism, creativity, peace and restoration. It’s a site that has brought people together and shown a brighter, more beautiful and more hopeful side of humanity. Let’s do everything we can to save it.

Painting from the Tyisa Nabanye Facebook page by Luciana Acquisto 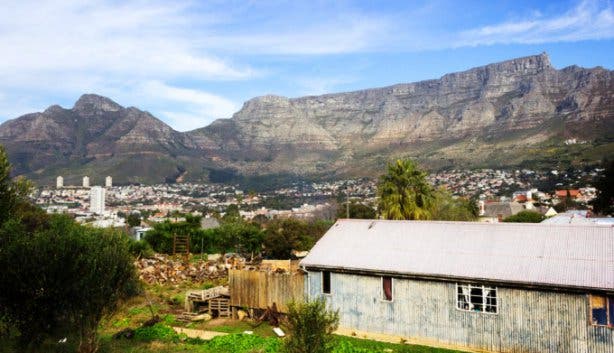 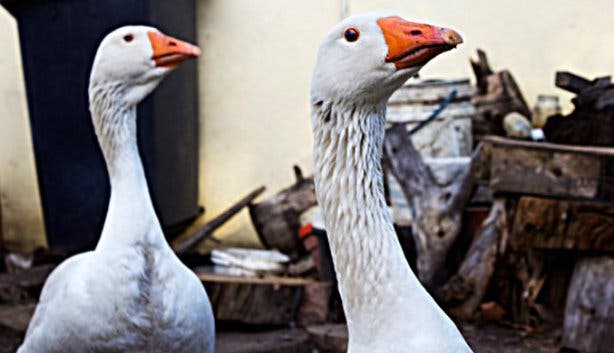 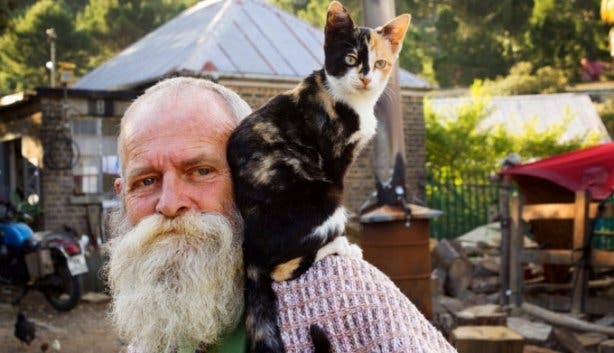 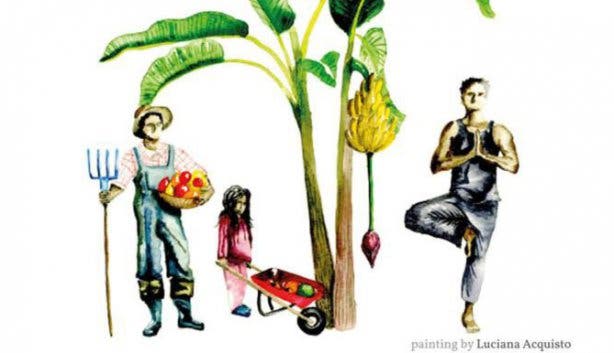 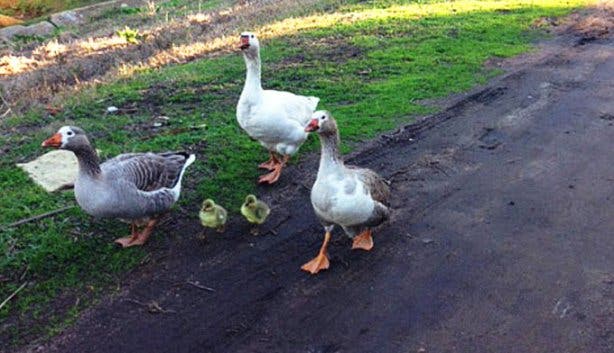 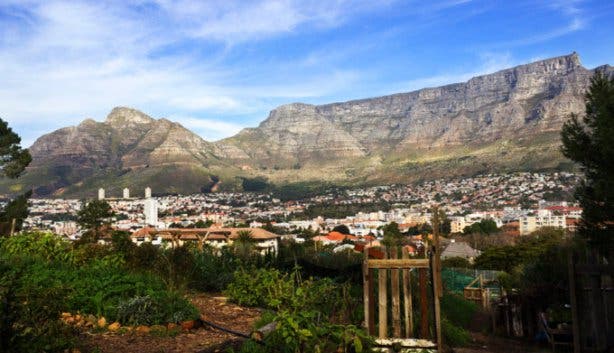 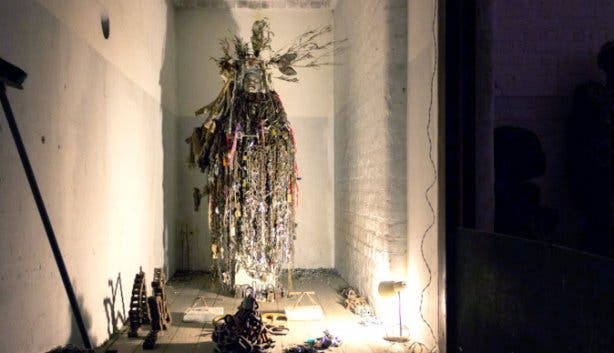 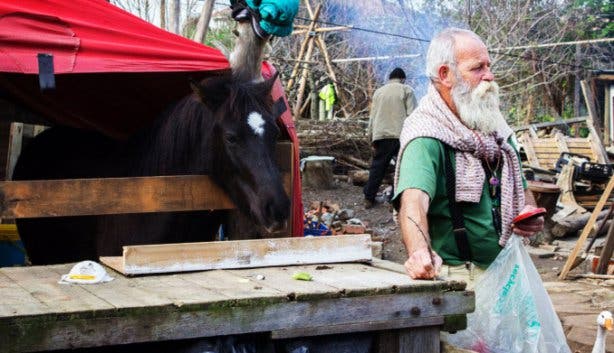 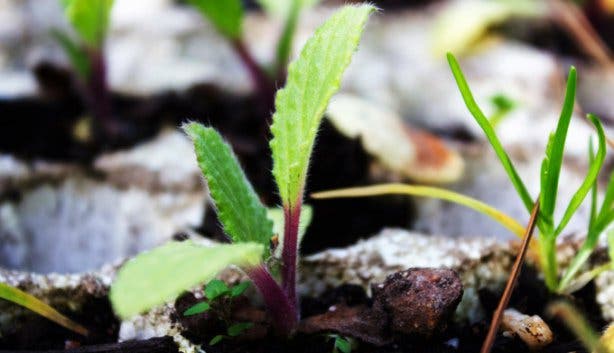 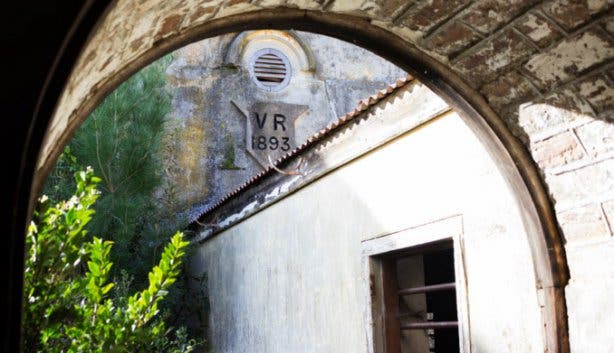 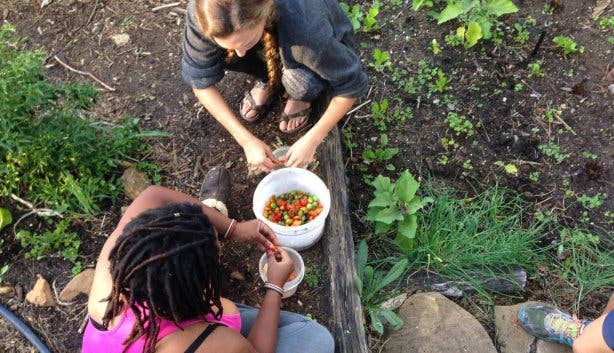