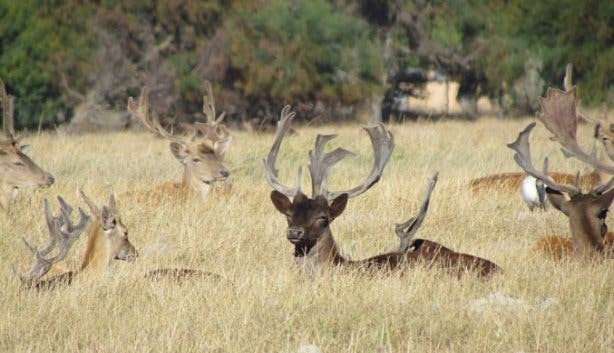 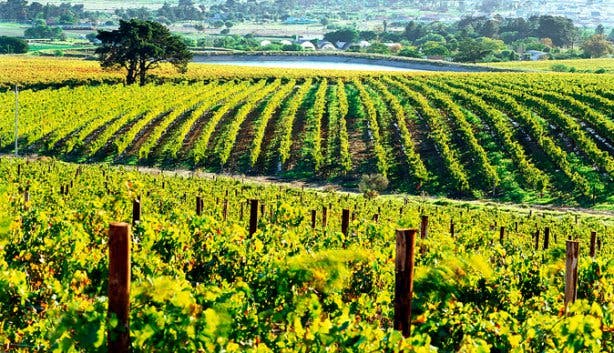 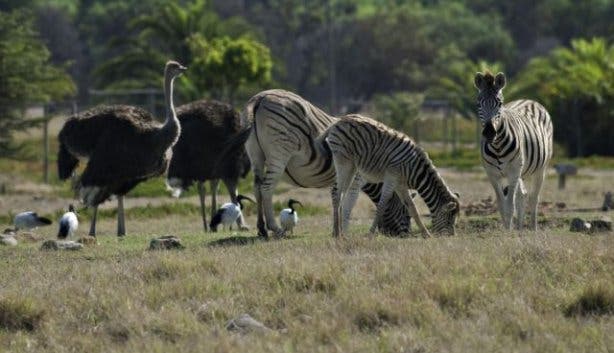 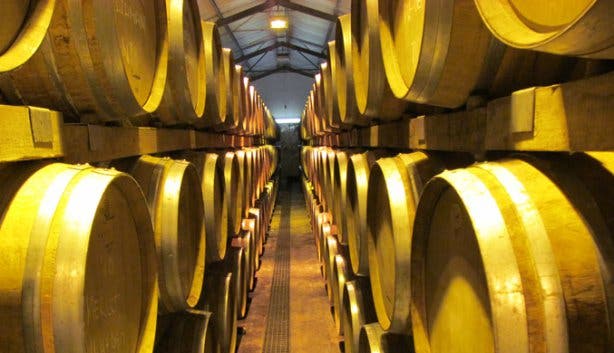 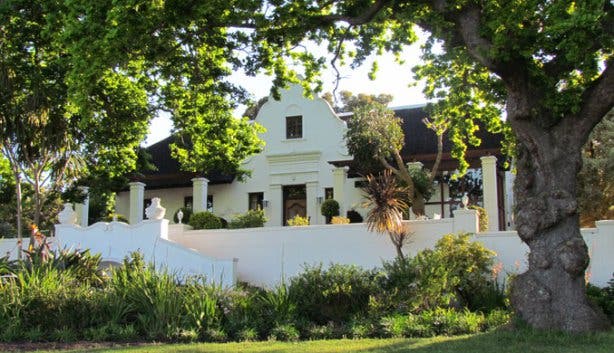 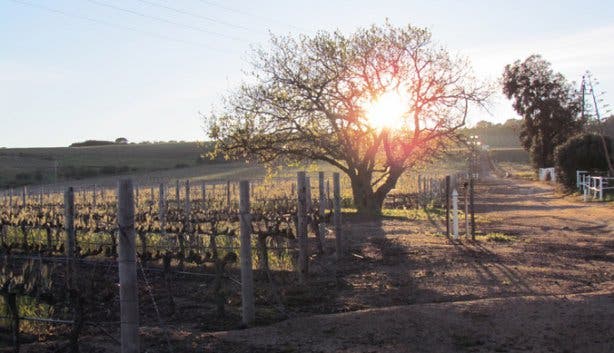 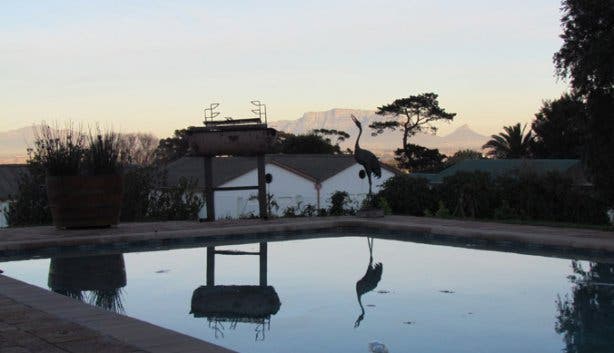 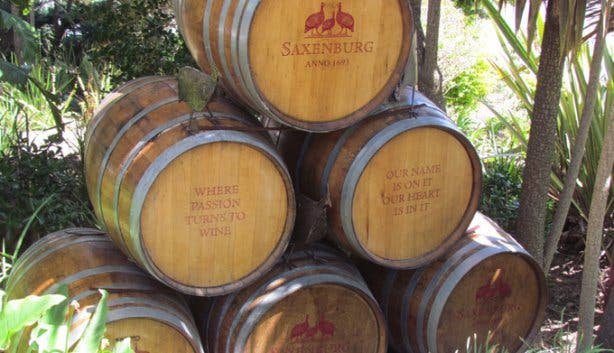 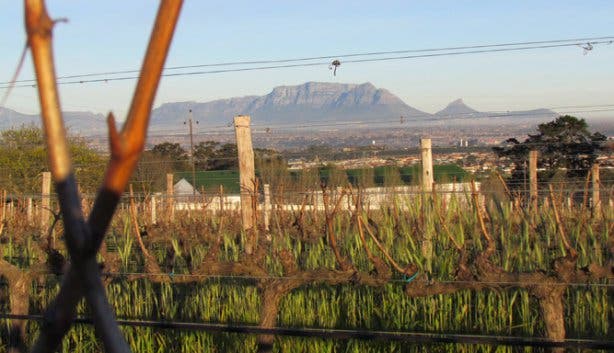 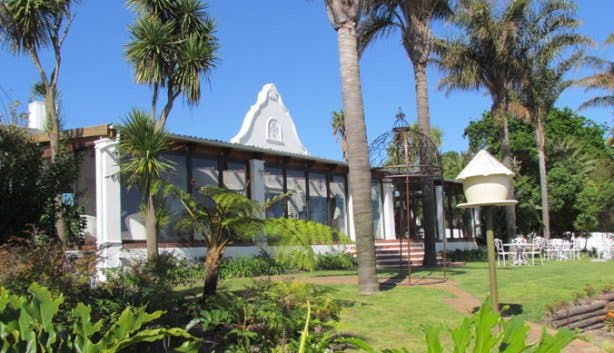 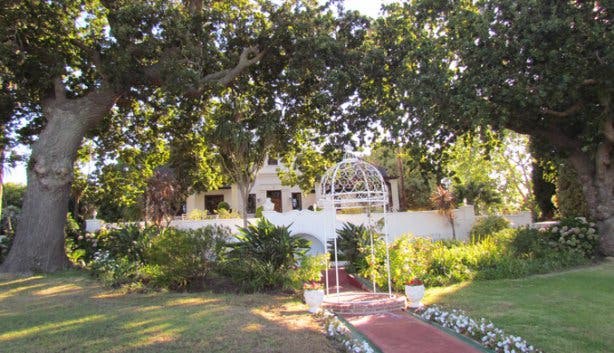 Where wine meets wildlife: meet the home of outstanding Shiraz and grazing game

If you know Saxenburg, you know its Shiraz. Thanks to the Stellenbosch estate’s status as the home of one of the finest versions of this varietal in the country, the two now go together in people’s minds like Jack goes with Jill. So, on arrival at the historical farm (it dates back to 1693), you’d naturally expect to see tier upon tier of plump red grapes, perhaps even a line-up of bottles filled with velvety ruby richness.

The reality is a little different though. Sure, the vineyards are there, rolling and sweeping across the hills in the background of the 200-hectare estate, but they’re not what first catches the eye. Rather, visitors are instantly met with the sight of zebras, springboks, ostriches and fallow deer grazing in a large enclosed camp and, beyond this, of a property that looks more like an old family farmstead than a large commercial venture.

This is mainly because Saxenburg is first and foremost a cherished home to the Bührers, a Swiss-German couple who bought over the ancient, then-dilapidated winery in 1989 (two of their children are now actively involved in running the farm). As part of their effort to revive the space, they added a mini game park to the front section of the plot in 1998 and made Saxenburg the first wine farm in Stellenbosch to claim a wildlife camp, largely just as an expression of their passion for nature.

Of course, the game sanctuary also makes for an unbelievable wine tasting experience, and guests can actually sit amongst the roaming creatures while sipping on the estate’s various vintages. Rather than overshadowing the vino though, the safari adventure simply adds to its enjoyment. For, truth be told, it’s really rather impossible to outshine the wines of Saxenburg.

Nico van der Merwe, the farm’s champion winemaker, melds heart, soul and mind when tending to the fruits of the vine, and he manages to craft a product that stands out as superb in the memory of its tasters year after year. The quality of his creations is testament to the fact that winemaking at Saxenburg isn’t just his career, it’s his life: the gifted cellar master has been at the farm for a full 25 years, ever since the beginning, and so, in Sales Director Eugene Kinghorn’s words, “he’s actually an extension of the Bührer family”.

For the first 10 years that he worked for them, he moved back and forth between the Stellenbosch property and the owners’ other estate in the South of France, and during that time, he developed a deep respect for the land and a belief that great vino is made more in the vineyards than in the cellar.

“He nurtures the product, but nature does most of the work,” explains Eugene. “Fortunately, we’re just blessed with very good soil and an ideal climate.”

On top of relying on the tip-top terroir of Saxenburg’s slopes, the winemaker also conducts a green harvest to significantly cut down the initial yield (10 tonnes per hectare is reduced to as little as 6 tonnes) so that only the best of the best of the grapes goes into the bottle.

A prime example of this is the flagship Triple S, a voluptuous luxury Shiraz that’s cultivated from just 20% of the vineyard’s bounty and is, according to Eugene, the only wine in the nearly 40-year history of the revered John Platter South African Wine Guide to receive five consecutive five-star ratings, making it something of an industry benchmark. It’s the farm’s most sumptuous Shiraz, but it’s not its only one: there is also the premium Private Collection bottle, which has all the warm spiciness that the varietal should have but is more smooth and elegant than bold and punchy, and a newer easy-drinking invention called The Drunken Fowl, which, with its quirky label and sweeter flavour, is built to appeal to the hip young crowd.

“It’s the fun, funky cousin of the rest of the batch,” Eugene says light-heartedly. “I call it the drug of red wine – it’s how you’ll get people to make the move over from whites and Rosés”.

Though you’d think that crafting some of South Africa’s finest Shirazes is a full-time job by itself, Saxenburg also makes a few other rather extraordinary reds too. And in fact, it was the farm’s Cabernet Sauvignon, not its Shiraz, that initially put it on the global map, where it’s remained ever since. In 2006, the estate’s well-rounded Cab won an award at the International Wine & Spirit Competition in London for the best Cabernet Sauvignon in the world. And although the winery’s velvety Merlot and smoky Pinotage can’t quite claim the same prestige, well, they’re equally fulfilling companions on a wet winter’s day.

Interestingly, the property is also mother to a Sauvignon Blanc and Chardonnay that are deliciously summery enough to blow away white wine worshippers. The first is laced with crisp, fresh tropical tones and the latter unfurls in the mouth like a flower, coating the taste buds with the perfect balance of oak and fruit. And for something celebratory, there is even a golden Méthode Cap Classique, which, rumour has it, Nico started producing solely because Mrs Bührer has a penchant for bubbly.

Of course, the most traditional spots to journey through the notes and flavours of Saxenburg’s collection would be in the estate’s modest tasting room or in the adjacent on-site restaurant (it’s currently undergoing renovations but will be open by the end of 2015). But neither of these venues are quite as exhilarating as the raised rondavel in the game park, where you can match your Shiraz with a springbok and truly see for yourself that while this cultivar carries the estate’s flag, it’s not the farm’s full story.

Tip 1: Just behind the tasting room rests the farms Hide Out lounge, where visitors can relax in an open-air environment and make use of the free Wi-fi while enjoying a glass of wine and a cheese platter. Use of this space is free and it’s also an ideal venue for small private functions.

Tip 2: Should you wish to stay over at Saxenburg after a day spent wine tasting, you can do so at one of the property’s three comfortable Cape Dutch-style apartments, which rest amidst the tranquillity of the farm and look out over False Bay. Bookings can be made on the Saxenburg website.

Planning to spend some time in Stellenbosch? Read more about things to do in this famous Winelands town.