My 68th Minute with Morgan Freeman

A visit to Khayelitsha with Morgan Freeman on Nelson Mandela Day

Actually that sounds a bit like a movie title, what irony. My Saturday was pretty average up until the point where I got told that Morgan Freeman was going to be in Khayelitsha on Sunday 18 July – Nelson Mandela Day, giving his 67 minutes as a present to Madiba - by helping erect a much needed fence around the SACLA building.

That, and the fact that I was getting the chance to meet him.

Now for me Mr Freeman’s no random Hollywood celebrity, I can say with honesty that I’m a big fan; from his more well known dramatic roles to his lighter comedic fare, I enjoy the whole range. Shawshank redemption, Bruce Almighty – the Dark Knight. And of course his turn as Mandela himself in ‘Invictus’...

- A role which brought him closer to the hearts of South Africans than before possible. But I’d always thought that he was a bit of a legend. Just a cool dude really, cool vibe.

Well really – I can’t think of one movie he’s been in I haven’t enjoyed. So the chance to meet him was welcomed; frankly I spent the time up until the 10 am Sunday morning arranged meeting time walking around in a surreal dwaal.

I recall the night of the FIFA World Cup Final I’d seen him perched in his chair, looking chill and undisturbed by anything and everything going on around him. “Man. Morgan Freeman. Dude. Dude. Cool”- I’d rather ineloquently thought to myself. And now the chance to meet that chill legend in the flesh? Surreal. This is an Oscar winner we’re talking about.

So anyway, I digress. Morgan (I get to call him that now, he told me, so there) was coming through from Johannesburg with a group of local celebrities and volunteers to perform acts of charity at various locations. This day nicely coincided with Mandela’s Birthday, so was rather a portentous moment, even if it had been Morgan Freeman-less.

I arrived in Khayelitsha at 10:06 am sharpish.  Right about the same time as Western Cape Premier Helen Zille, and watched as the flock of indistinguishable journalists rallied around her, camera’s flashing and questions flowing while she Toyi-Toyi’d with others in celebration of Nelson Mandela’s Birthday.

This went on for a while, but soon our fearless leader’s presence was overshadowed by the roar of Motorbike’s signalling the arrival of Morgan and his posse. As the phalanx of media swept round, I peered in vain to get a look at the Oscar winner. And get a look I did.

He answered questions I couldn’t quite make out with answers I couldn’t quite hear – but I could hear the tall gentleman’s tone. And that was exactly the same as the one that so calmly narrated March of The Penguins, that smooth as silk baritone - charming, unperturbed, and casual as all heck. But undeniably gracious.

While him and others got to work (pretty much immediately upon arrival) I was informed by his media liaison that he was really all about getting involved in the work – that after all I’d be lucky if I could get a second from him.

I was strangely okay with that – he seemed so... unfazed by the attention, so intent on the work he’d come there to do, that I almost didn’t want to prescribe to the flock of journo’s who were asking him the same array of question’s he’d been asked (undoubtedly) a million times before: WhatdoyouthinkofSouthAfricawhatwasitlikeplayingNelsonMandelatellusaboutyourtimehereDoyou
thinkSamuelLJacksonistryingtobeyouMorrrrrgannnnnnn!

But come the finishing of the fence and the real assault of the media upon the international star, and I must admit at that point I would have given him my camera just to get an autograph. Luckily within minutes my time did come, and a large bouncer/ bodyguard/human wall made the introduction before I even had a chance to gather my wits and dismiss my momentary lapse into gushing fan/schoolgirl.

I really didn’t want to waste his time. It was weird, but straight away I thought “Morgan Freeman’s tired, I can see that – maybe I should just smile, turn around and leave.” If ever there was an ‘everyman’ actor (who yet somehow managed to evoke pure presence), this was him.

I forced a handshake on him, and it was returned with an even, firm strength. Taller than my 6 Ft by a full head, I looked up into his calm face -  “Pleasure to meet you Morgan”, I sputtered, before recovering somewhat and asking him what he thought of South Africa, and Cape Town in particular.

“Well you know, I’ve been here before. Love it absolutely LOVE it.”

Going to play any golf while you’re down? (Wikipedia had informed me the man was a keen, skilled golfer).

“I’ve got my clubs, but I haven’t really had a chance, unfortunately I don’t think I’ll get to.”

What’s most inspired you so far, what feeling, or sentiment do you think you’ll most take back with you?

He stared at me like I was a bit of an idiot ruining an otherwise perfectly normal chat, and I immediately regretted my corny question. I was doing so well, now I’m just another journalist, dammit. Should’ve stuck to golf... If only I knew more about Golf.

But his graciousness knew no bounds, and he deflected it by mentioning the determination of those who had travelled with him down from Johannesburg, and how much they’d persevered to accomplish the goals – with real... “GRIT” I said with him, which brought a smile to his face.

I... thought of the same word at the same time as Morgan Freeman... I can die happy.

Realising that I was starting to gush, blush and approach something not unlike a groupie, I made my goodbyes as calmly as I could, saying what a pleasure it was to meet him.

“Likewise’’, he replied. Likewise. Likewise. Morgan freeman though it was a pleasure to meet me. I can still die happy.

Ushered away towards some other media’s barrages before getting into the car for the next leg of driving, I found myself staring at the tall, quiet – but quietly powerful, actor’s back, and thinking -

67 minutes for Nelson (That other magnificent presence) and the 68th for me. I can live with that.

For your monthly update on what’s happening in Cape Town and to make sure you get to read the all on Nelson Mandela Day and Morgan Freeman’s involvement in Khayelitsha, subscribe to our popular Editor's Picks Newsletter. 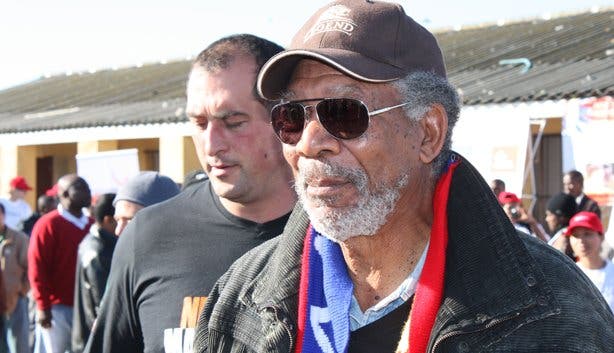 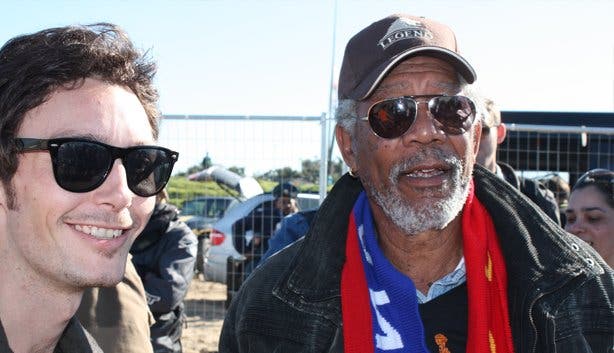 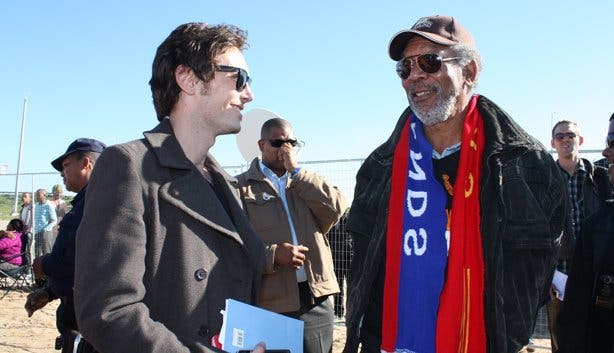 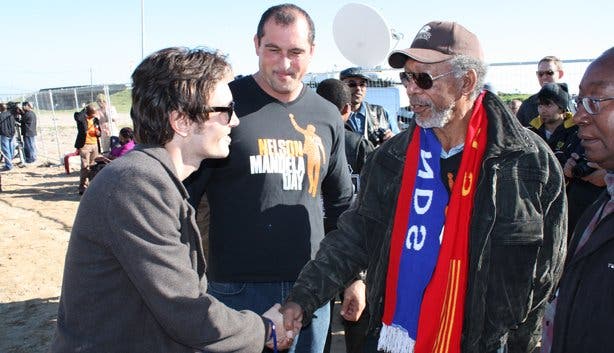 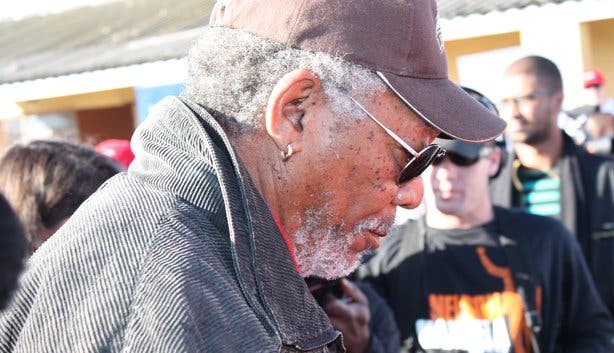 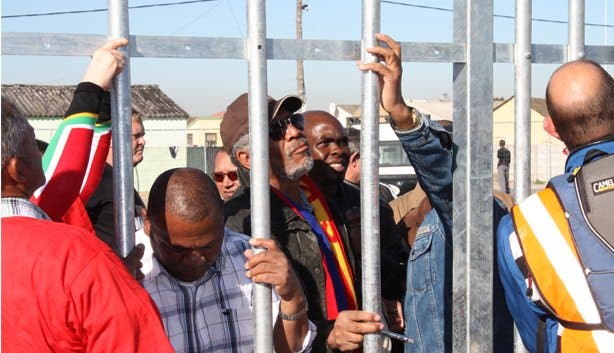 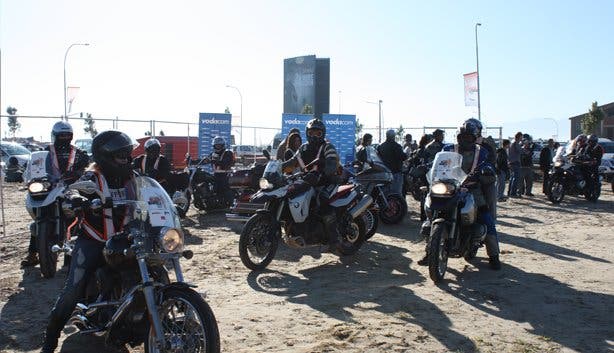