Not only has the #Capestorm wreaked havoc in the Mother City but now the Knysna fires have torn through the Western Cape affecting over 77 000 people. Due to the fires, families in the areas have had to evacuate with no indication of the raging fires calming down. Mother nature has released it’s wrath on the Plettenberg Bay and Knysna areas.

There are ways to help even if you are many kilometres away! As with the Hout Bay fires in the beginning of 2017, there are places you can take items to donate as well as relief funds you can donate to. Every bit will aid the thousands that are displaced by the fires. Let us stand together like we did for the 2017 Hout Bay Fire.

One of the easiest ways to donate is to visit the Salvation Army Southern Africa site. There are active donation links where you can help victims of the Knysna fires and #capestorm - helping you to do your bit to help!

The @NSPCA_SA has dispatched 2 teams to assist the animals that have been affected by the #KnysnaFire
YOU CAN HELP https://t.co/kXqFJyOtZK pic.twitter.com/lDQPsAY7kt

If you want to donate to #KnysnaFire Relief, Pick n Pay will deliver any online purchases. Here's how > https://t.co/xfNBW208t4 pic.twitter.com/rwTApdJb3C

The only official emergency donations accs which are vetted will be posted on our official social media pages for the #KnysnaFire victims . pic.twitter.com/lQXbNEHi2C

We've donated R100 000 to #KnysnaFire Relief. You can drop donations in marked trolleys at WC stores or online > https://t.co/xfNBW208t4 pic.twitter.com/vcDxCv8SK9

#KnysnaFire A local coffee shop owner has turned his business into a hub where displaced residents can make use of internet facilities. KB pic.twitter.com/GaEyTw0K9I

ATTENTION ALL!! CRC Cares Knysna Disaster relief! CRC ASSISTS! We are calling all members to help the families in need!! We need all available hands and feet! All members to report at CRC George to help TODAY, bring tinned food, clothes, blankets any donations! Further instruction will be given upon arrival. We need to comfort, uplift and assist in this crises! #KnysnaFire #CRCcaresKnysnaFires

Check out why Chapman's Peak is closed. If you are looking to donate clothes here are some places you can go, have a look at our Charity Shops Overview. Have a look at what the biggest storm in 30 years got up to in Cape Town!

Find out how you can really help in Cape Town. See how you can do your bit for flood victims in the future! Find out where you can volunteer around the Mother City! 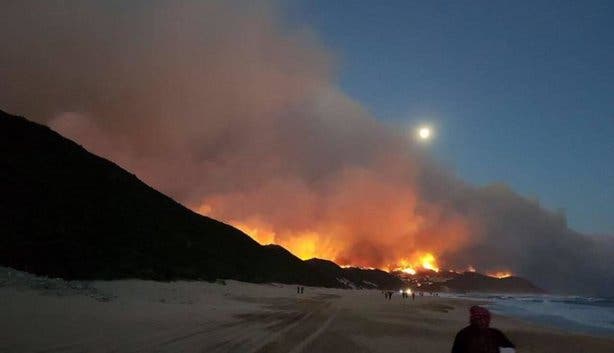