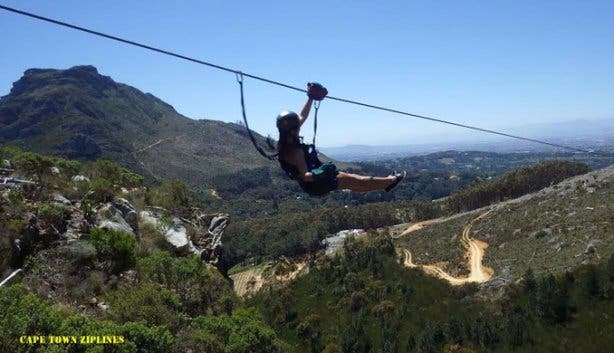 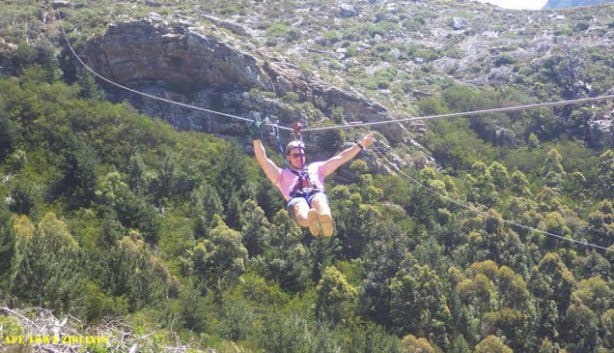 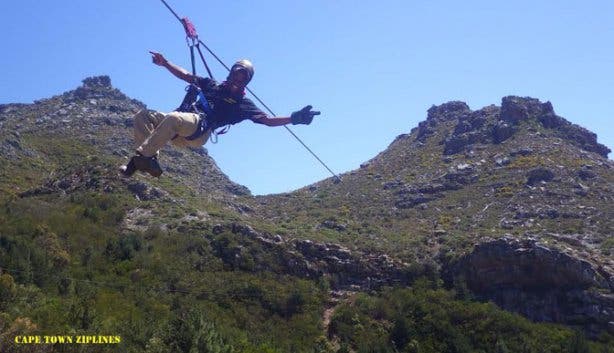 Thanks to the new Cape Town Zipline Tour, adventure enthusiasts can be browsing the boutiques of Kloof Street one minute and whizzing through a canyon at Constantia Nek almost the very next. The exhilarating aerial cable slide, which is located  on the private Silvermist Wine Estate, is the very first of its kind to be opened so conveniently near to the electric hum of the CBD (roughly 20 minutes away), and its launch unveils a whole new world of thrills right at city dwellers feet.

Founding company SA Forest Adventures has already established similar sky-high expeditions in Hermanus, Caledon and Citrusdal, so it was just a matter of time before it set up camp on one of Cape Town’s famed slopes to give locals and tourists access to an exciting activity that’s not only close but also quick (the whole tour takes maximum two hours to complete, so much of the day is left free).

“It’s an awesome experience to tick off your bucket list while in the Mother City,” says Clinton Lerm, the owner of the venture. “And it’s so accessible – it doesn’t take three or four hours to do and the drive from pretty much anywhere in Cape Town isn’t long either.”

Though, don’t be fooled by the swiftness of the adventure: this is no casual, calm foefie slide. The new zipline route is, in fact, one of the longest on the African continent (approximately 2.3km in total), and with single  cables that stretch up to 500m in length and that soar 155m above the ground at their highest point, it’s not for the faint-hearted. The only way to reach the first platform at the top of the Constantia Nek slope is via an off-road drive in a 4x4 vehicle (this trip is part of the fun), and once daredevils have pushed off the starting podium, the drop gets steeper and steeper and the experience more and more hair-raising.

“It will make you gasp for air,” claims Clinton, who insists that the Cape Town zipline is the most thrilling of all the SA Forest Adventures tours. “You feel as tiny as a rice grain way up there.”

But the activity is not only aimed at getting the blood pumping and the vocal cords loose. While whooshing down the stainless steel lines, patrons can take in some spectacular sights too. The course is framed by Table Mountain and looks onto the back of the awe-inspiring Twelve Apostles mountain range and down the Constantia Nek valley. Fynbos and treetops fly by far below, the glittering ocean can be spied from two of the platforms and vineyards are visible from at least one of the seven slides.

The founder has been very careful to preserve the natural environment as much as possible – only wood from alien invasive plants was used to build the stands – and he’s as committed to human safety as he is to that of the ecosystem. As a result, thrill-seekers receive a full briefing and demonstration before being driven up the hill and two well-trained guides accompany every group to watch out for zipliners’ well-being and to offer some educational insight into the surrounding valley.

The excursion is bound to rouse those hunger demons, and while there is no meal included in the tour, there are two restaurants on the Silvermist Wine Estate (one being the recently relocated La Colombe). So, you can choose to stay on afterwards for a well-deserved lunch or dinner, or if you so wish, you can hop on the road and be back browsing those Kloof Street boutiques in nothing more than a matter of minutes.

Note: The minimum age requirement for the Cape Town Zipline Tour is eight years old, so kiddies younger than this will unfortunately have to sit the experience out. There is also a maximum weight limit of 120kg.

Tip: The zipline tour is a great idea for a year-end function, a bachelor party or any of several other celebrations. Groups of up to 60 people can be accommodated, and aside from the course, patrons can make use of the on-site restaurant.

The Bill: The two-hour tour costs R600p/p and bookings for groups of six people or less can be done electronically via the company’s website (Saforestadventures.co.za). If you’re a clan of more than seven, email bookings@saforestadventures.co.za to make a reservation. [Please note: between 20th December 2021 & 2 January 2022, the rates will increase to R650 per person.]

Read about another relatively new adventure experience not too far from the Mother City: the Cape Canopy Tour in Elgin.