The room rate here includes your own piece of paradise

It feels wrong to call Kennedy’s Beach Villa a guesthouse; it’s more of an oasis. Bordering Onrus lagoon and beach, a fishing village five minutes away from the centre of Hermanus, the property is a piece of paradise.

There’s a sense of magic about this five-star accommodation, and the enchantment starts, where else, but at the entrance. With a mossy stone lion standing guard, the wrought iron gates beyond are heavy to push open—an indicator of another time, an era when structures were built to last (they are the original gates of Cape Town’s Labia Theatre).

Owners Ymile and Arwie Kennedy have had the property for 25 years, and for the last six have operated it as a guesthouse. However, they’re far from green when it comes to the accommodation game, they used to own a five-star guesthouse in Upington, where Arwie still farms.

“We’ve been married for 35 years,” the blue-eyed, bubbly and beautiful Ymile says smiling  up at her Kalahari farmer. “I don’t just love my husband—I’m in love with him.”

Towering over his blonde wife, Arwie is tanned and with a kind of fitness only a lifetime of working under the sun can bring.

Beyond the regal perimeter and under the good graces of the loving couple, there are just two places to stay here: in The Beach Suite, which has its own deck overlooking Onrus Beach, or in the Lagoon Villa, which is hidden deep in a milkwood grove.

Ymile shows me the Beach Villa; this is indeed a place for lovers. The room’s dominating palette is white and cream, with wide floor-to-ceiling windows overlooking a spacious sun deck that tapers off with a Jacuzzi at the edge. “You can Jacuzzi and watch the whales play in the bay,” says Ymile. The views are sublime: Onrus lagoon and beach are spread out on the one side and the wavy lines of the Kleinrivier Mountains on the other.

The room includes an en-suite bathroom with a Victorian bath, and a Queen-sized bed with percale cotton and self-catering facilities such as, a mini-bar fridge, tea and coffee making station, as well as microwave and crockery. There’s also a TV with selected DSTV channels.

“We originally built this for our children,” says Ymile showing us the Lagoon Villa where we’ll be spending the night. In the planning stages they wanted to build the villa upwards, but due to building restrictions, they had to opt for downwards instead. A fortuitous constraint, as now the villa is neatly hidden in a milkwood grove, giving guests utmost privacy in indigenous Overberg nature. There’s still a view of the lagoon, albeit not as sweeping as the one above.

“I was inspired by an old French tavern,” she says explaining the layout of the villa. “The living and sleeping spaces are in one, and it has an elegant, old world feel.”

And similar to much age-old accommodation, there are several places to put your feet up: there’s a sitting area at the entrance leading onto a stoep, which in turn leads to the milkwood jungle beyond, as well as an area with faded maroon armchairs positioned by the fireplace.  There’s also a billiards table, an elegant dining room table dressed with crystal glasses andtucked into a corner  -  a Louis XIV Queen size bed with a Victorian-style bathroom off to the side (complimentary Just Pure toiletries are included).

My eyes keep flitting from object to object, something new reveals itself with each glance; from elegant sculptures to strangely beautiful antiques. The far wall is a length of teak panelling; Ymile tells me that it once belonged to Simon van der Stel (the first governor of the Cape Colony). There’s also sunken kitchen that’s fully equipped for self-catering.

From the villa our private kingdom extends down through the milkwood grove, where amongst the curved branches there’s a braai area with seating, as well as a garden cottage (it’s available during the high season and sleeps two, a great place for kids over 12). Our rambling domain doesn’t end there though; also in the tunnelled grove are a hammock and a wishing well. Plus as you come out on the other side, there’s a set of deck chairs and umbrellas which line the lagoon edge; there are canoes should you wish to set sail.

The golden colours of twilight are gathering, so my partner and I decide to take advantage of the open-air bath hidden within the grove. If you want the experience of a bath with actual milk, you need to pre-book, but this evening we’re happy with bath salts and candles in our hot water cradle suspended in the milkwood boughs.

We wind our way back, scrubbed and rosy in soft robes. Soon a fire is crackling away, sinking into soft seats we pair the moment with complimentary port and dates (the latter from the owner’s farm in Namibia).

The night falls thick and silent. We’re in utmost privacy. And it’s easy to understand what makes this place so ideal for honeymooners, and for those wanting to pop the big question.

There aren’t any curtains, but the leaves and branches of the milkwoods are so thick against the windows that it acts as a natural shield.

The beach is a four minute walk from Kennedy’s, and so is breakfast. The guesthouse is self-catering, so if you haven’t brought along your cornflakes, The Milkwood Restaurant serves up delicious fare. It’s a spectacular morning. The nature is humming and the air is salty and sweet. We’re sitting on the deck of the restaurant; it’s on the edge of both the lagoon and the beach. Mallard ducks fly low over the water, no doubt looking for their own breakfast, and the surf of the ocean crashes onto the shore.

For breakfast, my partner devours ricotta fritters with bacon and roasted tomatoes, while I show an equal amount of restraint with a flaky croissant piled with creamy scrambled eggs and salmon.

A look at the lunch menu and I’m tempted to wait it out—fresh seafood dishes, including abalone, prawns and oysters abound.  But, we opt for a walk on the pristine beach instead; capping off our unique getaway with an act that holds the same romantic magic so perfectly captured by Kennedy’s Beach Villa

Tip: Open-air aromatherapy massages are available for both lodgings; either on the deck for Beach Suite guests, or in the milkwood grove for those staying in the Lagoon Villa. 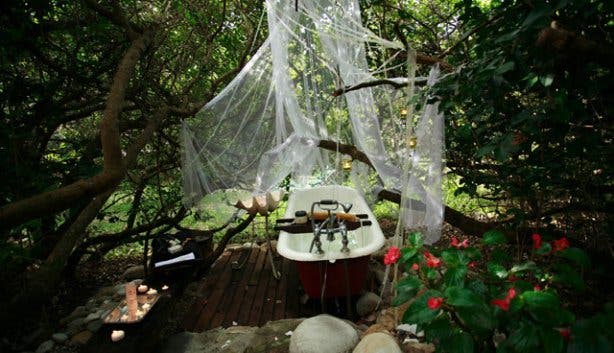 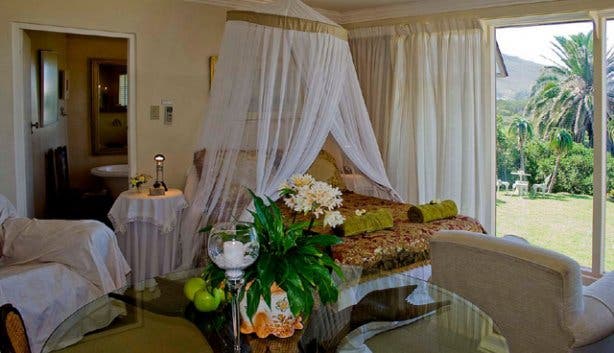 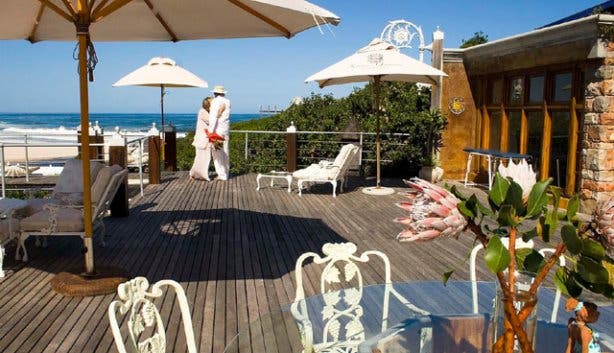 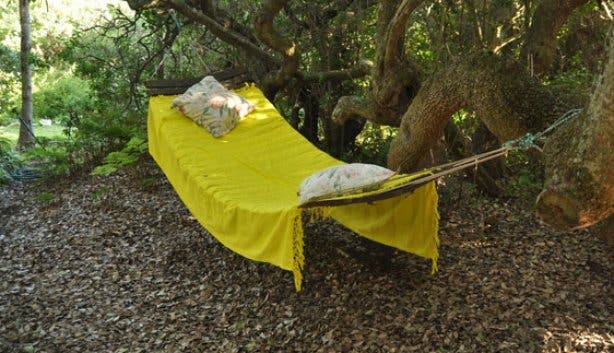 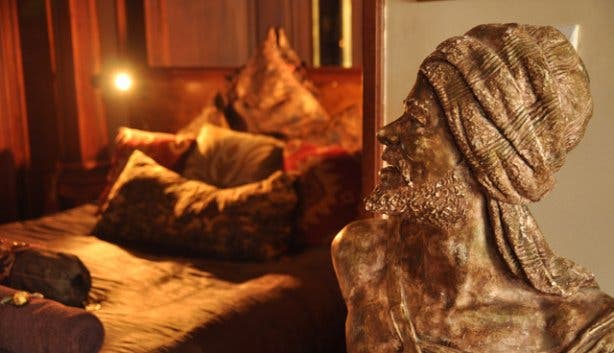 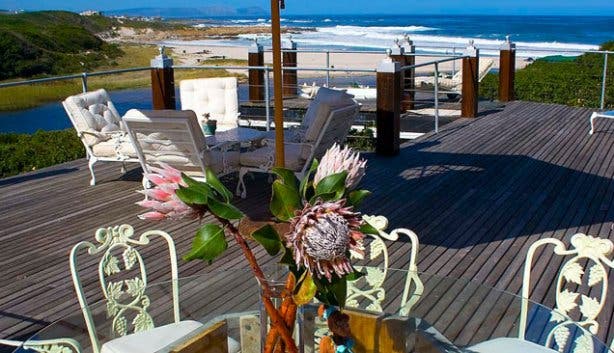 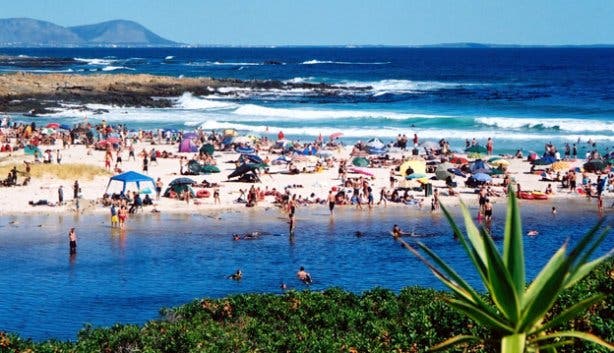