The Royal Hotel in Riebeek Kasteel is said to be the oldest licensed hotel in the Western Cape, but even with a birth date that reaches back to the 19th century, the colonial classic doesn’t show her age: the hotel has been refurbished so that it retains the spirit of pioneer times but with a modern edge. And in turn, the restaurant offers up contemporary cuisine amidst a formidable slice of heritage - but without a hint of stuffiness.

My partner and I are seated at a table for two by the fireplace: Orange flames lick upwards, warming the room; the tables are turned out beautifully in starched white linen and silver cutlery; and above the mantelpiece glowers a large wildebeest, a quirky addition to the otherwise simple space.

We’ve just seen sunset out from atop the hotel’s seemingly never-ending veranda – it’s billed as the ‘longest stoep south of the Limpopo’ – and drained the last drops of the Royal’s signature drink, the humble gin and tonic. The old-fashioned cocktail is served in brandy goblets the size of flower vases, and the selection of gin is staggering: Tanqueray, London Beefeaters, Bombay Sapphire and much more.

“It’s relaxed, upmarket ‘bistro style’,” Head Chef Francois du Toit explains, walking us through the menu. “I concentrate on simple food, on taste. I don’t want to overwhelm the palate, so I stick to three or four main flavours on a plate.”

The menu, which changes seasonally, flirts with fine dining technique and presentation, but like the charming surrounding winelands town it calls home, it doesn’t pretend to be anything it’s not.

Riebeek Kasteel sprawls out amidst undulating vineyards and plump olive groves just over an hour from Cape Town, and though it’s beckoned to quite a few famous South African artists and media personalities looking to spend their twilight years amidst the beautiful scenery and peace and quiet, it hasn’t let its more well-known residents inflate its ego.

The Royal Restaurant is much the same. It’s rated number one in the area on travel website TripAdvisor.com, and along with its host of a hotel, it’s something of a destination extraordinaire. Still, it’s decidedly unpretentious, and Francois and his team aren’t trying to contend with South Africa’s growing legion of molecular gastronomists and nose-to-tail devotees.

“I’m not trying to do a science experiment here,” the chef sums up in his good-natured way; rather, he prides himself on his ability to keep on the cusp of the world’s cuisine scene from his home in the little Western Cape country seat.

In essence, he follows the phases of the globe’s culinary trends like most Riebeek locals follow rugby, and then he and his team infuse approachable classics with the whimsy du jour: think little frills like Wasabi syrup, lime aioli, sun-dried tomato chutney and creamy sweet potato ice cream.

After perusing the extensive wine list (it boasts some of the best wine from the surrounding region), three words jump out at me from the food menu: Triple Cooked Fries.  The indulgent side is a nod to English celebrity chef Heston Blumenthal, who describes what you’re left with after the three-step process as “chips with a glass-like crust and a soft, fluffy centre”. In short, heaven, and Francois’s version is good enough to feature in the afterlife. The fries accompany the Plankies Steak, which is 300g of rib eye cut into strips served with béarnaise sauce, a creamy classic French reduction.

The dish comes to the table served on a narrow plank (hence the name). The sauce is perfect and the meat is butter-soft.  My partner also orders steak, but opts for the Chalmar Beef Fillet. It comes with delicious parsnip and potato fritters and is dressed with a cranberry and Shiraz jus —a rich delight with delicate, tangy notes.

Francois has an impressive résumé. Aside from a background in food development technology, he’s done a stint at one of the country’s best restaurants, La Colombe, and he’s also sweated over the stove at Manna Epicure on Kloof Street in Cape Town.

Though, despite a seemingly promising career path, he almost gave up cheffing. Passionate about pursuing his interest photography, he moved back to his family farm in the Swartland and only came into his current position with the help of a touch of serendipity. He started waitering at The Royal Hotel to supplement his income while studying, and it wasn’t long before he became head chef.

“Once you’re in it, you can’t escape the hospitality industry,” he says, joining us by the fire. Our plates are cleared away and we’re perusing the dessert menu. We decide on a Strawberry Tart with Mascarpone-Basil Syrup.

He encourages us to return during warmer weather, when guests jostle for a table on the front stoep, under the trees on the hotel’s vast back garden or on the recently built open-air terrace, which treats diners to cascading views of the surrounding mountains and of a rippling a dam.

And with the promise of an impending summer return in our heads, we finish dessert, cut through the silence of the country night and head to our room on the edge of the hotel’s garden to dream of David Livingstone and, obviously, another kingly meal at the Royal.

Tip: If you’re on the hunt for an unforgettable meal, call ahead and book the restaurant’s five-course tasting menu. In our opinion, it’s one of the best value-for-money eating experiences in the Western Cape. Do note, it’s necessary to reserve the menu ahead of time by telephoning +27 (0) 22 448 1378.

Bill: The prices are reasonable for the value. Expect to pay between R48 and R72 for a starter and R105 and R155 for a main.

By Malu Lambert and Stephanie Katz

Read more about an overnight at The Royal Hotel in Riebeek Kasteel. 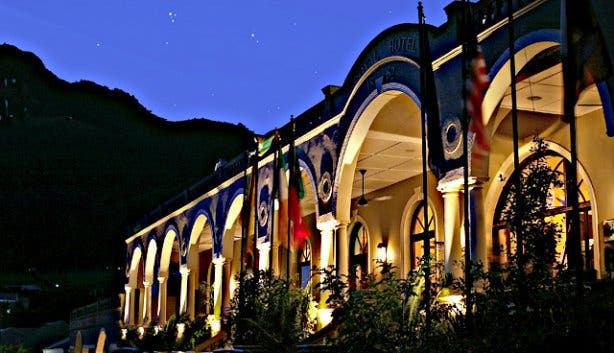 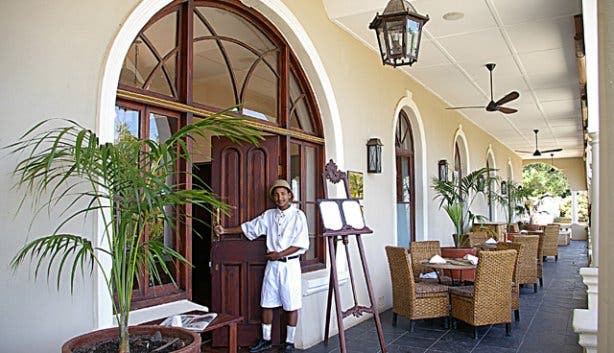 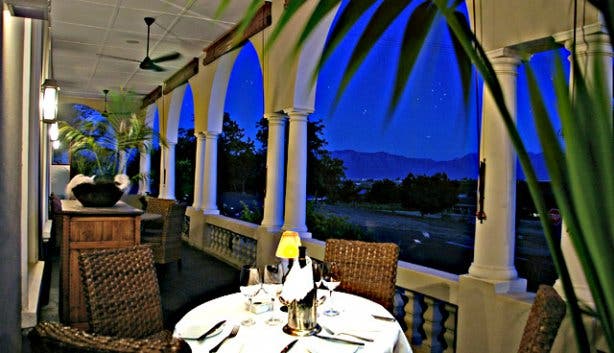 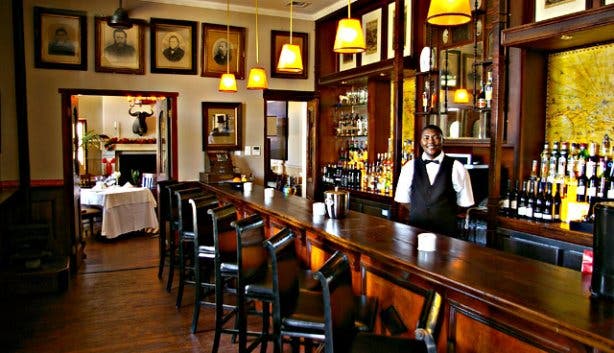 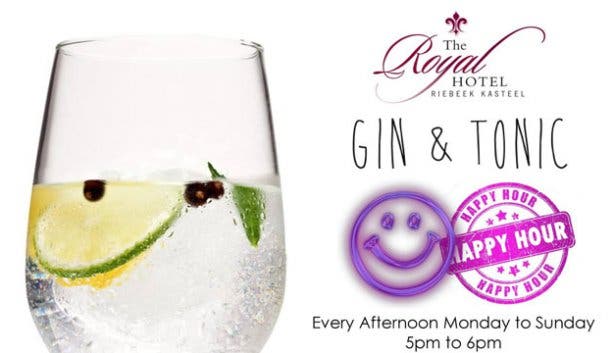 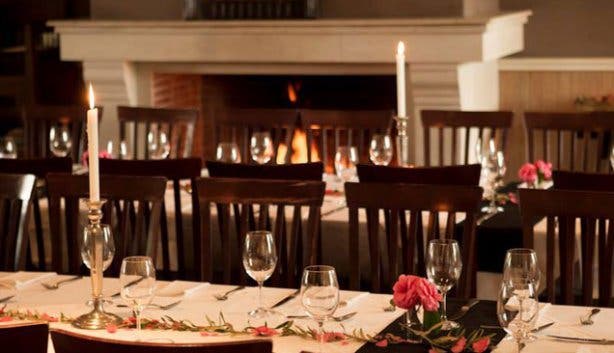 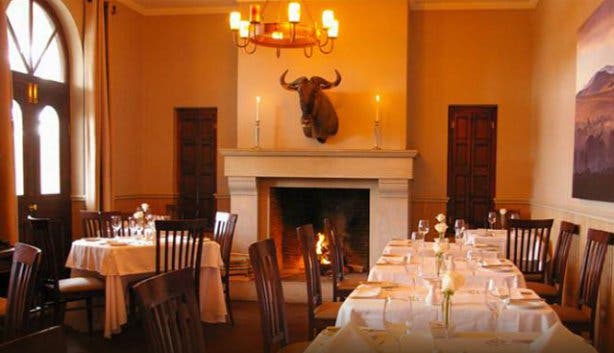 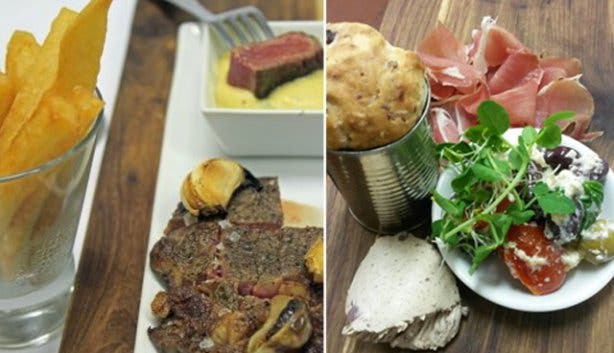 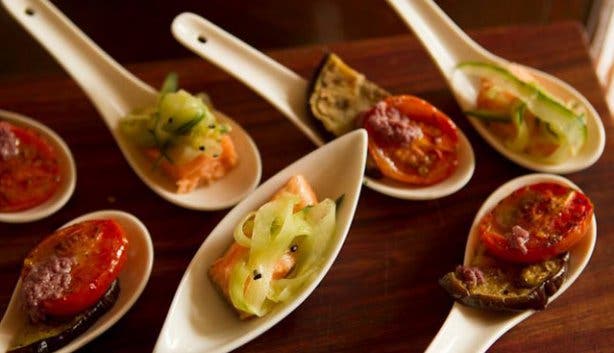