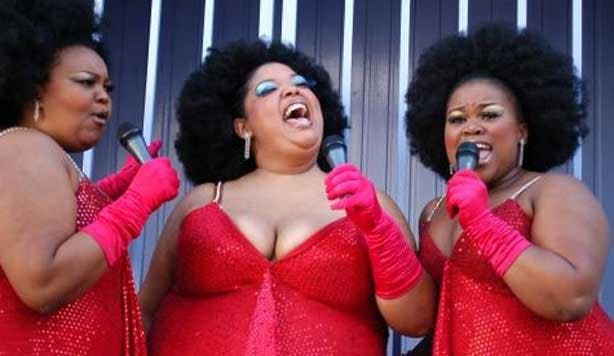 3 Tons of Fun at On Broadway

3 Tons of Fun at On Broadway

The phenomenal 3 Tons of Fun are back!

3 Tons of Fun features the incredible vocal talents of Michelle Thomas, Sthe Mfuphi and Bee Cosa who, together, combine vocal power, skilful harmonies, smouldering sensuality and a vivacious larger than life energy that gets audiences up on their feet every single time.

3 Tons of Fun have emerged over the last five years as one of Cape Town's most loved all-female groups. They are in great demand on the corporate circuit and have performed at functions for top companies and at some of Cape Town and South Africa's top venues.

3 Tons of Fun were invited to perform at SABC3's 3Talk Conference early in 2006 and at the Woman of the Year function in July of that year. Their first international engagement was in Thailand in September 2006 and since then have travelled to Swaziland, Switzerland, Togo, Zambia, Botswana, Nigeria & Namibia as well as wowing audiences throughout South Africa and perform regularly at conferences at Sun City.

3 Tons of Fun sang the acceptance speech for John Vlismas at the 2007 SA Comedy Awards. They performed at the Loerie Awards 2008 and the Huisgenoot/YOU Skouspel in October 2008. Most recently they performed at the opening of The One and Only Hotel in Cape Town in April 2009.

In this brand new show commissioned specifically for On Broadway, the girls tackle the most well known and liked songs made famous by African and American songstresses including amongst others Dusty Springfield, Alicia Keys, Jennifer Hudson, Diana Krall, Etta James, Randy Crawford, Chaka Khan and Brenda Fassie.

Find out more about the On Broadway experience by reading our feature on On Broadway theatre in Cape Town.

For your monthly update on what’s happening in and around Cape Town, be sure to subscribe to our free and popular Editor’s Picks Newsletter.