"We are the coolest" and not the "old men with beards"

My friend Dominique had a Vespa-party a couple of weeks ago at the Tritalia in Bo-Kaap Cape Town. You might know the place since it looks so Italian, old and romantic. Oh yes, romantic. Don’t we all just wanna ride a Vespa – it looks stylish plus you’re really faster in the Cape Town buzz. Cape Town is the Vespa-capital of South Africa. And Vespa-riders unite. Either at the Vesparados or the Cape Town Vespa Club.

It’s like with the mods and the rockers. Let’s just say the Cape Town Vespa Club represents the mods and sticks in an effort to restore the original Vespas, trying to keep the good old Vespa alive - it’s all about vintage. The Vesparados though, they are the Vespa-rockers with leather jackets, they are more extreme. They are simply the scooter-gang.

I met Michael at the party. He's an architect as well as a Vesparado and we had a good chat about these beloved Italian mobile things and the Vesparados. The smiling white skull and the Vesparado writing on his black leather jacket should have given me enough insight into the seriousness of the Vespa-lover.

A couple of days later I met Peter Forbes, a cool Irishman with a strong accent and a big heart and found out that he is the man who got the Vesparados going in Cape Town. I learned more about the gang and popped in one Wednesday evening (Wednesday night = Vesparado night)at the Vesparado clubhouse in an industrial area close to town.

It’s good to have routines, so the Vesparados (around 15 people) meet every Wednesday night for chats, beers, stunts and fun at the Vesparado Clubhouse which is located on Peter Forbes welding-workshop premises. Architects, coffee roasters, builders, panel beaters, electricians and metal workers come together to celebrate what life is about.

It all started 15 years ago when Peter started the gang with three friends. Quickly, more and more people joined and Sunday mornings became the regular time for social Vespa-rides, starting at Greenmarket Square.

Michael bought his Vespa in 1987. Back then it wasn’t trendy at all. It was more the pharmacy delivery guys that rode them. In the mid 90s the fashion started. That’s when Michael met Peter in the Magnet Bar in Cape Town. Michael also tells me that after World War II the Italians made the first Vespas out of surplus airplane parts.

Peter’s premises and workshop was like a wonderland, it felt like Charley’s Chocolate Factory, just with the focus on steel and Vespas. I saw a tree full of beer bottles and other interesting things that are just beautiful to look at. Peter ("el presidente" of the Vesparados) is the dude who brought it all together and who keeps it all together.

Andrew, a builder from Stellenbosch, met Peter through his kids who were at school with Peter’s daughter. The reason for him coming to the Wednesday meetings is purely "socialising and the community".

"We are petrol heads" added Andrew and talked about his love for motors, grease and making things go faster.

Another guy with a big Vespa-tattoo, Brendon, told me how much Peter helped him out with a place to stay and more when he was in trouble.

Then there was Ray, the chairman of the Cape Town Vespa Club (you might know him from the Xupa Xupa shop on Kloof Street) and also likes to hang out with the "Vespa-rockers". He likes to call the Vesparados the "Hell’s Angels of the Vespa."

"The Vesparados are the rebel off-shoot of the Vespa Club," said Ray

"We are the coolest", added Anthony, who owns a social media company. The guys are proud to be Vesparados: "We’re not old men with beards". Most of the Vesparados are in their 30s and 40s and own older Vespas, meaning they are at least from 1985.

And yes, Vespas do break – all the time. "But it’s part of the fun fixing it" beams architect Michael. When they go on trips, the Vesparados usually join up with the Cape Town Vespa Club (every second Sunday), they visit rock festivals and rallies and take parts along on the trip, in case a Vespa breaks down.

These days the long trips go from 100 to 150 kms, sometimes also with a speed of 20kmh up the mountains on a dirt road. Every October, the Vesparados and the Cape Town Vespa Club go an annual rally in Tulbagh.

On the walls in the clubhouse I found the music sheet of "I walk the line" with Johnny Cash as well as pictures of the good old days, quotes saying "Life’s a journey, I enjoyed the ride" and pictures of scantily dressed women.

Outside there is the 'ring of fire' and other things to do some stunts with - stunts are Carl’s speciality. That’s why he got the nickname 'black jackal'.

"We all have nicknames," says Carl. He is the youngest member and joined the Vesparados in October 2009.

The philosophy behind the Vesparados is not rocket-science. The slightly rebellious men are just a bunch of friends and "it’s us doing our thing and actually being silly little boys," Michael summarizes.

I was just about to leave when I met Dave Cotton. He arrived with his Vespa and two helmets. I asked for whom it is.

"We care. That’s me in a nut shell. This helmet is for you. Vespa is there to share."

PS: Never speak with the Vespa-guys about Vukka-scooters. "We do hate them" says Ray but he understands that it’s a cheap form of transport. 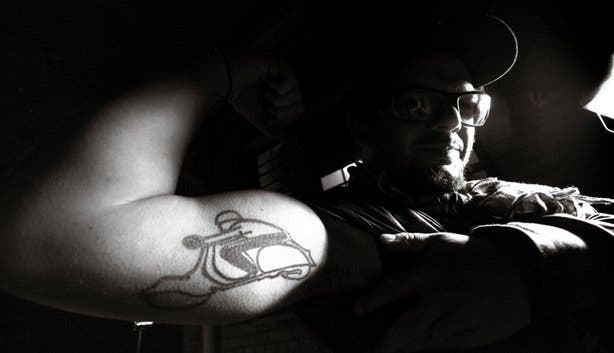