The legendary tale of Cape Town’s most famous great dane

There are many stories of extraordinary animals (especially dogs) that have left their paw prints in history, touching the hearts of those who lived among them. Names such as Laika, the first Russian canine in space, Jock of the Bushveld and Sergeant Stubby, the most decorated war dog in WW1, come to mind. In addition to these (and many other) honourable creatures is Simon’s Town very own famous great dane, Able Seaman Just Nuisance.

It was in 1939 that Just Nuisance became the first and only canine Royal Navy member in history. Although it was fairly common for ships to have a dog onboard owing to the hound’s ability to keep livestock in order, rescue men from overboard and even help enhance crew morale – the furry creature was never truly considered a member of the crew. Well, that was true until Able Seaman Just Nuisance came along. Here is the legendary tale behind the gallant sea dog and a timeline of the canine’s history.

Childhood
1937, April 1: Although there are some enquiries about his birth date, Just Nuisance was reportedly born in Rondebosch, Cape Town to his breeder Mr. H. Bosman.
1938, February 27: He was officially registered as a great dane under the name “Pride of Rondebosch”. His sire was “Koning” and his dam was “Diana”.
1938, March: Just Nuisance was sold to Mr. and Mrs. Chaney who lived in Mowbray at the time. In the same month, the Chaney’s moved to Simon’s Town, where Mr. Chaney became the manager of the United Services Institute (USI), which was a hostel for sailors ashore.

Simon’s Town has a rich naval history, which stretches back more than two hundred years. Although now home to the South African Navy, in those days the Naval Base fell under the command of the British rule and the Royal Navy was the largest naval base on the entire African continent.

Early Years
Just Nuisance grew up in a very social environment soon becoming acquainted with the young Royal Navy sailors, who fell in love with the young pup. Just Nuisance continued to grow into a big, strong dog (even for a great dane) of enormous proportions (he was almost 2m tall when standing on his hind legs), but with a gentle nature. 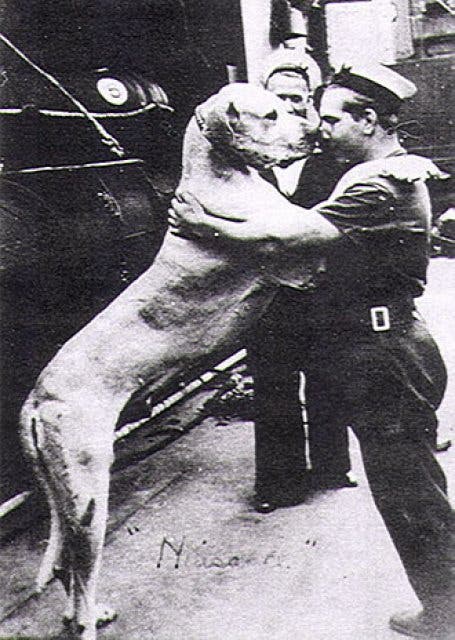 He loved the sailors and in turn followed them everywhere, even catching the train to Cape Town (35km away) with them. Despite the sailors’ efforts to conceal him, owing to his large size and the fact he insisted on lying across three seats on the train, the railway authorities soon became annoyed by him and would kick him off the trains. 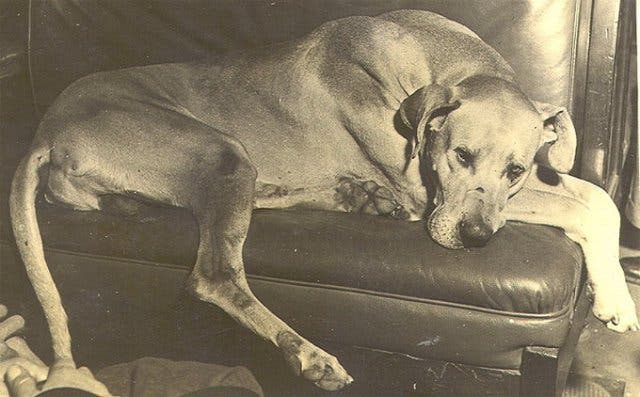 This, however, did not faze Just Nuisance as he would patiently wait for the next train, or walk to the next station where he would board another train. Amused travellers would at times pay for the hounds train fare, but eventually officials of the State-owned railway company, South Africa Railways and Harbours threatened to have him put down unless he was prevented from boarding the trains and/or had his fare paid in full.

In response, the sailors hastily consulted their Officer Commanding, who thought of a very unusual yet brilliant plan for the great dane:

Able Seaman
1939, June 6: Just Nuisance “volunteered” to join the Royal Navy. At that time the Royal Navy, expecting an outbreak of the War, was recruiting new sailors. The Officer Commanding knew that as an enlisted sailor during the WW2, Just Nuisance would be entitled to free rail travel at all times and thus, his fare-dodging days were over!
1939. August 25: Just Nuisance commenced his duties in the Royal Navy and was issued with his own sailor’s cap. A special collar was made for him in the Naval dockyard, to which his free pass was attached. Just Nuisance’s official documents say that he was a “Bone-crusher” by trade and that his religious denomination was a “Scrounger”. Furthermore, Just Nuisance was given the rank of Able Seaman: Able Seaman Just Nuisance.

The canine was quartered at HMS Afrikander and even had his own bunk. A sailor was also put in charge of him to ensure that he was fed, bathed and brushed regularly.

Rebellious Streak
According to his conduct sheet, Just Nuisance was no saint and was guilty of several misconducts. These included the canine travelling on the train without his free pass (he hated his collar), sleeping on a bed in the Petty Officers’ dormitory (when he was only an able seaman), going AWOL (absent without leave), often losing his collar and even resisting eviction from pubs at closing time. One of the great dane’s most serious offences, however, was fighting with mascots of other Royal Navy vessels. The great hound caused the deaths of the mascots on both the HMS Shropshire and the HMS Redoubt.

All things considering, Just Nuisance was seen as much more than just a dog. He did much to boost the morale of all those involved in fighting the WW2, from the Atlantic Station and was renowned for the love and care he showed for his sailor mates. 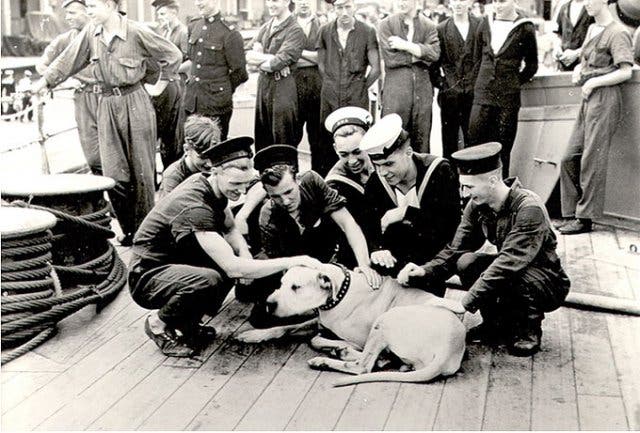 Death
1944, April 1: At the age of seven, Just Nuisance was involved in a car accident that left him with a thrombosis that had paralysed him. The severity and deterioration of his paralysis caused him to be discharged from the Royal Navy as well as admitted into the Simon’s Town Naval Hospital. On advice from the naval veterinary surgeon, Just Nuisance was taken up to the Royal Naval Hospital and put to rest by the Surgeon Commander who administered the injection.

Following his death, Just Nuisance was wrapped in a canvas bag, covered with a White Ensign and buried with full military honours at Klaver Camp, situated above Simon’s Town where a simple granite headstone marks his grave. Owing to the fact the Royal Navy was heavily engaged at the time in fighting the War, it is remarkable that the naval signal announcing Just Nuisance’s death and burial was sent to every naval ship and establishment worldwide. 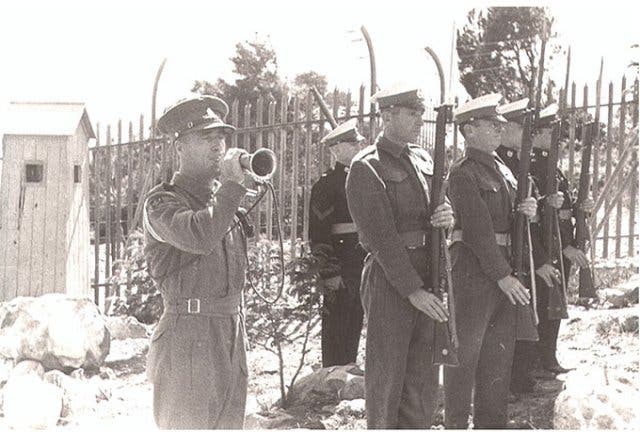 Legacy
The legendary story of the extraordinary character that was more human than dog still lives on today where the uniqueness and admiration of his tale has left many tourists, and Capetonians alike in awe. Now days, Able Seaman Just Nuisance’s bronze statue, erected in 1985 stands proud and tall in Jubilee Square overlooking Simon’s Town. 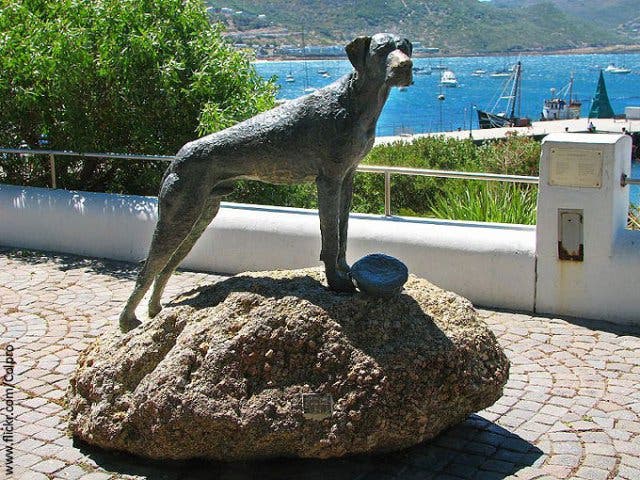 The Simon’s Town Museum has in its collection, all Just Nuisance’s official papers, his collar as well as many photographs of the great dane. A special display has also been mounted in the museum and a slide show about the famous dog is shown to children and tourists from all over the world. Furthermore, since 2000 there has been an annual parade of great danes from which a lookalike is selected in honour of the noble canine, Able Seaman Just Nuisance. 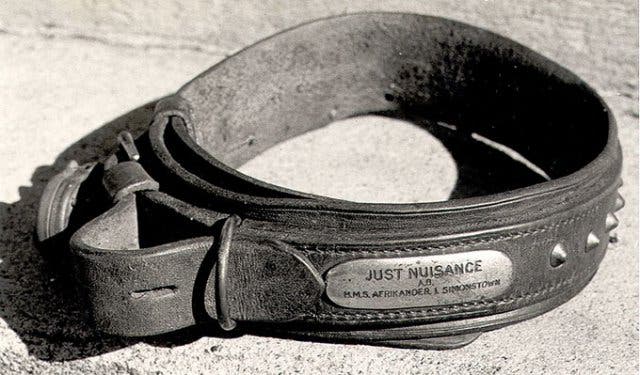 Fun Facts about the great dane: 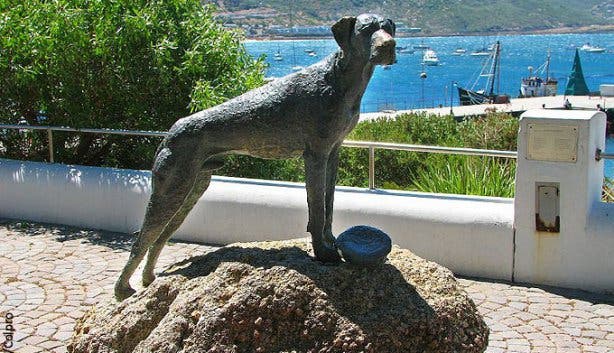 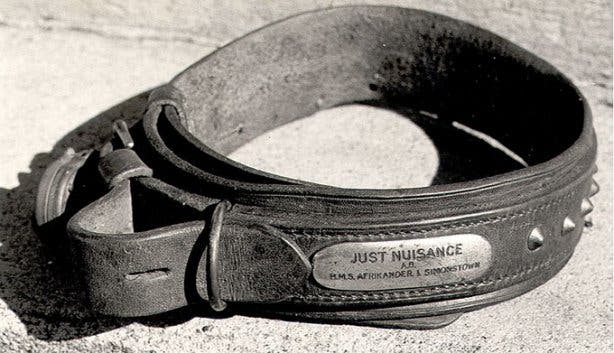 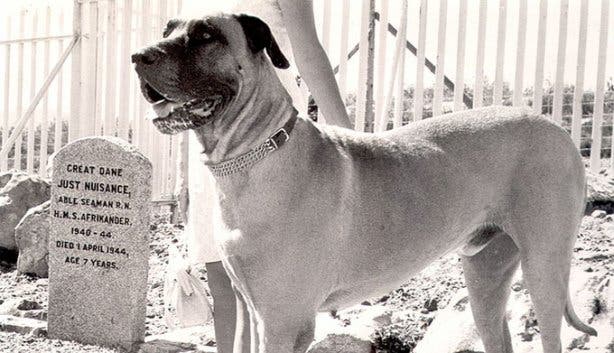 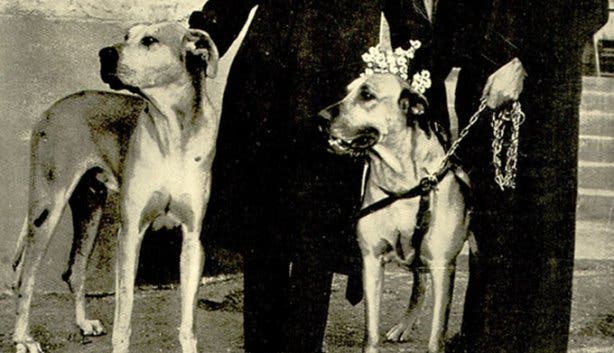 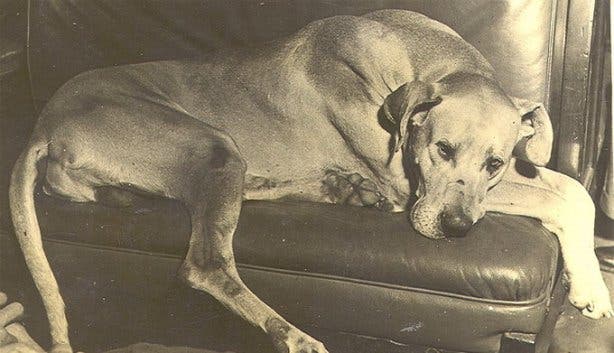 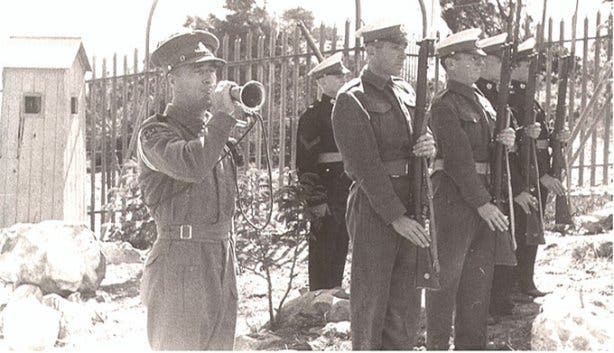 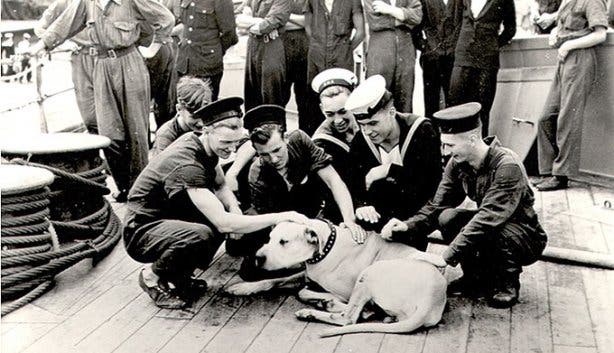