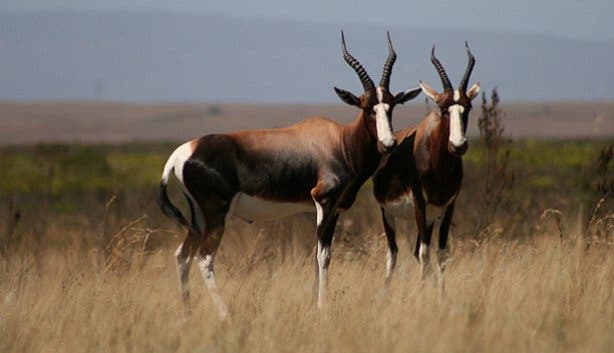 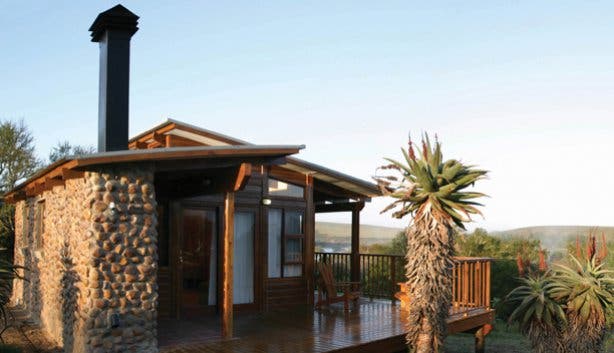 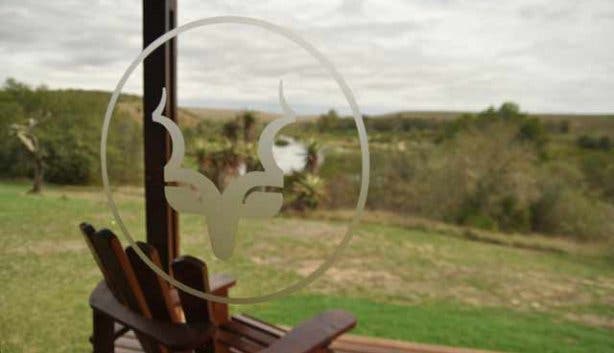 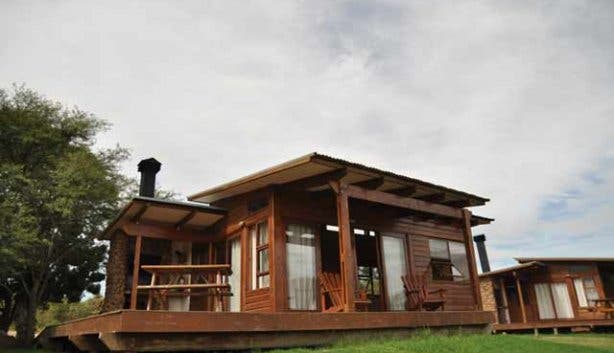 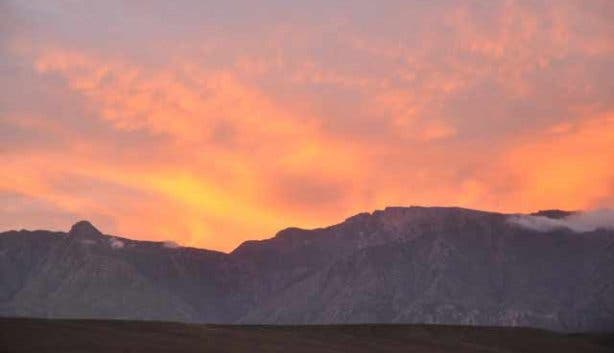 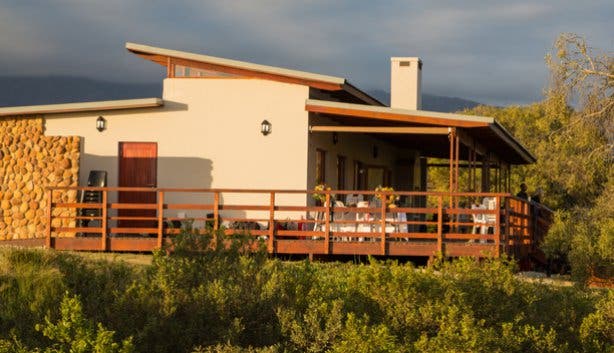 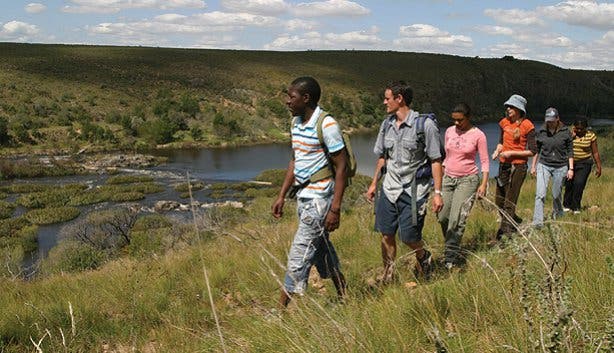 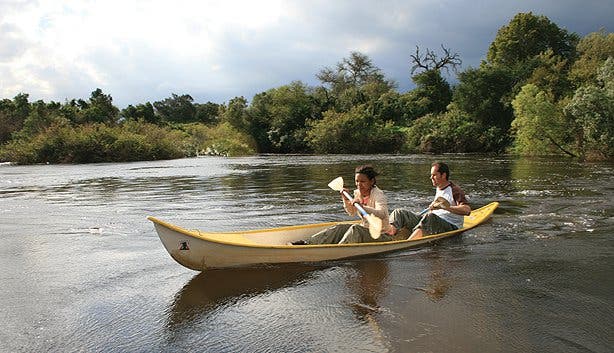 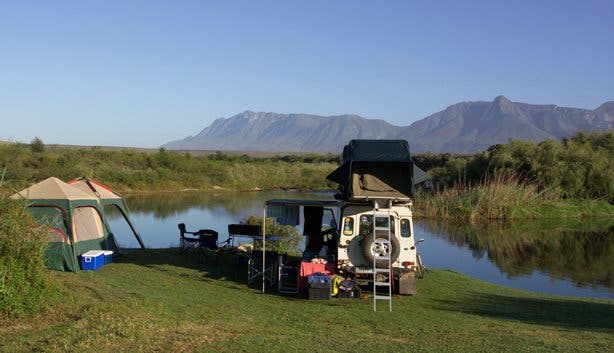 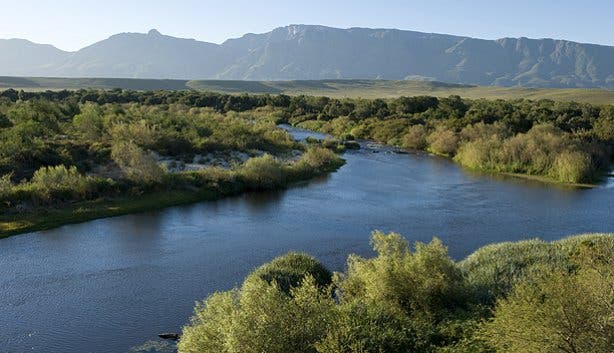 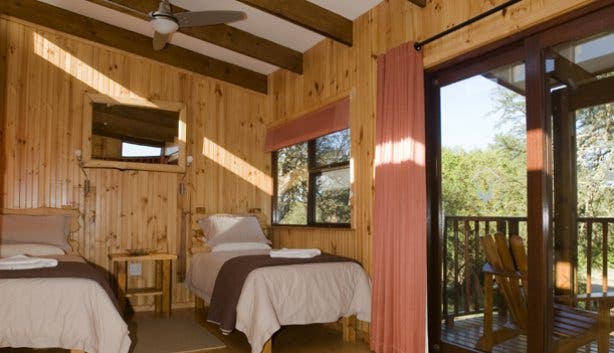 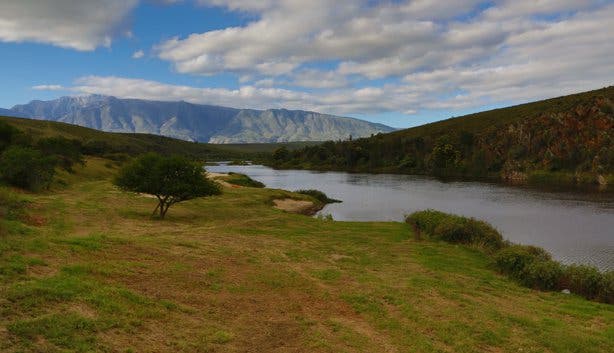 With three hours of highway behind us (coming from Cape Town) we enter Bontebok National Park; a reserve six kilometres outside of Swellendam in the Western Cape. Already its simple charm has me winding down the window, flooding the car with the scent of fynbos.

This park is the smallest of South Africa’s National Parks (SANParks), and is home to, you guessed it, a large population of bontebok and other buck. We spy some of the former in the tufted grass along the road; the white colouring on their faces bears an eerie resemblance to a tribal mask—hiding the wearer behind.

Once checked in, we head to our chalet: lucky number seven, and it’s the best of the bunch. Aloe sentinels frame the view of the Breede River, and bouncing birds punctuate the stillness with the occasional song.

The chalet is a simple pleasure; all caramel wood with a wraparound porch and viewing chairs, and of course, the ubiquitous braai. Inside, the space is neat and compact, there’s a self-catering kitchen, a large, luxurious bed, and a bathroom with a shower; all infused with the scent of heat trapped in pine (like so manychildhood summers).

Armed with cameras (the only shooting you’re allowed to do), we explore. This isn’t a park where the mission is to cross the Big Five off your list; it has more subtle pulls: seemingly boundless space curtailed by the stretch of the Langeberg Mountains, rare and intriguing flora, and the feel of genuine relaxation—there’s no need to dash off to the waterhole before sunrise here.

The park was established in the 1930s to protect the last 30 bontebok left in the wild. These days they’re flourishing. We also spot, hopping through the grass, a pair of bunny-tailed grey rheboks.

Even before it was a conservation effort though, the land was once a Khoikhoi stomping ground, the graves of a chief called Lang Elsie and his kinsmen are said to be on the property. The exact burial site is difficult to locate as the grounds are covered in hardy renosterveld, but legend has it that the tribe haunts the park. And, if you dare, you can pay a visit to Lang Elsie’s kraal to see for yourself.

The Langeberg Mountains have been holding back for dusk. Like a crimson-hued firework display the sunset bursts over the horizon. The drama is momentarily dazzling, and we watch the sky darken into purple and gold. Later back at the chalet, we star-gaze, braai, and toast our glasses.

The next morning the call of the fish eagle wakes us, swooping over the Breede River looking for breakfast, and we decide to follow suit.

As we leave the park, bontebok flank us on each side; silent, and ancient. And just for a moment, we think fancifully that it’s Lang Elsie and his kinsmen hiding behind those masks.

Rest Camp
There are 10 fully equipped self-catering chalets (complete with braai facilities and outside furniture). They sleep two adults, but can accommodate up to two adults and two children or three adults with mattresses and a sleeper couch.
Wow factor: the view of the Breede River as the sun sinks.

Camp sites
Lang Elsie’s kraal rest camp accommodates six people per site, with or without electricity. The Riverside campsite, which is open between November and April, also accommodates six per site (no caravans allowed).
Wow factor: the ghost stories about Lang Elsie you can tell around the campfire.

Trivia: Die Stroom is a game drive route that passes along the ‘old racecourse’,where horse races were held in the late 1800s by Europeans who used the small in stature Khoikhoi as jockeys.

Looking for an idyllic Swellendam farm-style getaway, boutique wedding or big group stay with some unique experiences? Have a look at Rotterdam Guest Farm in Swellendam.