A household name and a firm favourite with music fans across the world, the dynamic and dance-worthy Freshlyground has been spicing up the global music scenes since their inception in 2003.

2010 has seen the Freshlyground honoured with recording the official FIFA World 2010 song 'Waka Waka' with Shakira.

The seven-piece band is one of the most popular in South Africa, with origins locally, in Mozambique and Zimbabwe. They have four fine studio albums to their credit, amongst them  the much-loved hit ‘Doo Be Doo’ from the multi-platinum Nomvula (2004). This catchy ditty was the most played song on South African radio in 2005.

They've spread the love from Namibia to New York, celebrated Songs of Hope at the Desmond Tutu 75th Birthday Bash Concert (2006) and astounded economists at the World Economic Forum in Switzerland ( January, 2010).

Seven years and four 2009 sold-out tours later, their signature sound is as popular on stage as it is on air. Their new album, Radio Africa is alive with energy and excellence and wants you to Tune into Africa.

Equal parts pop and afro, sung in English, Xhosa and French; it's an energetic album full of wisdom, celebration and creative and cultural synergy

Bassist, Josh Hawks explains the recording process. “We went into it with a Motown feel in that we all recorded in a big room together, and I think the album that came out of that experience is our most earthy so far.”  This was encouraged by francophone Fabrice 'Fab' Dupont, a New York based producer, a move which proved a positive one. “Working with Fab was a creative and emotionally stimulating journey from Long Street to Alphabet City and back. Radio Africa tells that story,” says drummer Peter Cohen.

The well-rounded collection of tracks is as lyrically outspoken as it is emotional and is, by turns, vibrant and relaxed.  Zolani Mahola, known for frank love songs like 'Pot Belly’ lends insights to personal, cultural and political concerns throughout without labouring the listener.

‘Baba’ is sung in Xhosa, and tells of a woman and her children suffering from a lack of support from her partner.

‘Baby In Silence’ is an emotive exploration of regret, growth and hope between lovers made powerful with a clear exploitation of the poignant vocal qualities that Mahola is known and loved for.

'Would you Mind' is a moving meditation of strings and mbira on self acceptance and its impact on relationship.

“Chicken To Change” is charged with conscience and criticism for Zimbabwean president Robert Mugabe, with backing vocals from Khayelitsha United Mambazo Choir.

No strangers to personal and collective growth after many years on the road together, the ambassadors of joy feel they've grown closer as musicians on this album. “Because we come from different parts of Africa and South Africa," ponders keyboardist and percussionist Seredeal Scheepers, "we bring different elements to the music which gives it a fresh sound.”  Listen to the fresh sound of Freshlyground's new album, Radio Africa, online.

Learn more about about the history of South Africa through song. Or find out where to enjoy live music in Cape Town.

by Freshlyground
About more about us?

The best ways to buy Freshlyground Albums and the coolest t-shirts etc? Easiest is online! FreshlyGround has got a brand new shop on shop.freshlyground.com 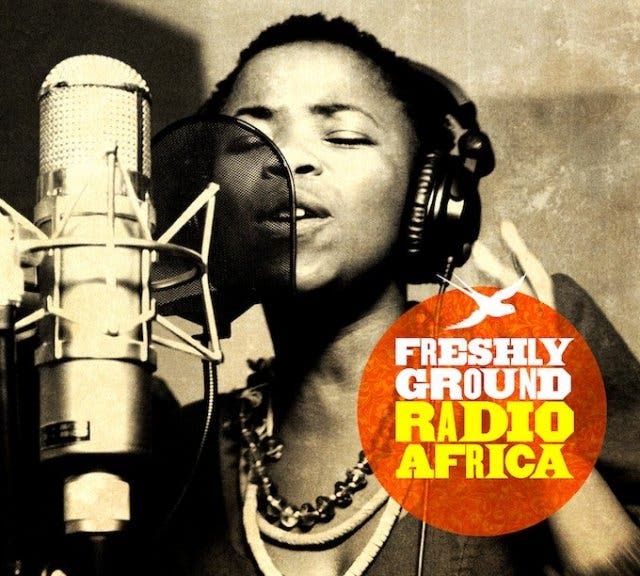