The Park Inn by Radisson Cape Town Newlands is the Galileo of the 21st-century accommodation scene: it’s fearlessly pushed past current conventions and embraced the digital thrill of the future with a hungry enthusiasm. Not only has it ploughed headlong into unchartered territory by becoming the first international hotel in the Newlands area, but it’s exercised true Renaissance-like pioneering spirit by taking on the rank of Africa’s very first NexGen Park Inn property – a contemporary, cutting-edge category of hotels recently launched by the overarching Rezidor group.

“Park Inn by Radisson has always been a young brand, but this NexGen version is really built for Generation Y…it’s a real trend-setter,” explains General Manager Clinton Thom. “Basically, we believe that this property reflects the way that all hotels are going to look in years to come.”

So, what exactly can millennials expect from this forward-thinking, five-storey lodging? Well, like its sister establishments, the hotel is hip, funky and exceptionally corporate friendly, but it also takes things up a level or two by incorporating all the latest and greatest in technology and modern comforts. The open-plan lobby welcomes visitors with slick curves, up-to-the-minute furnishings and daringly vibrant colour splashes, and just beyond this foyer is a state-of-the-art ‘Live-Inn’ zone that’s designed to lure worker bees out of their rooms and into a shared area so that they can click and email away in an urban café-like setting. 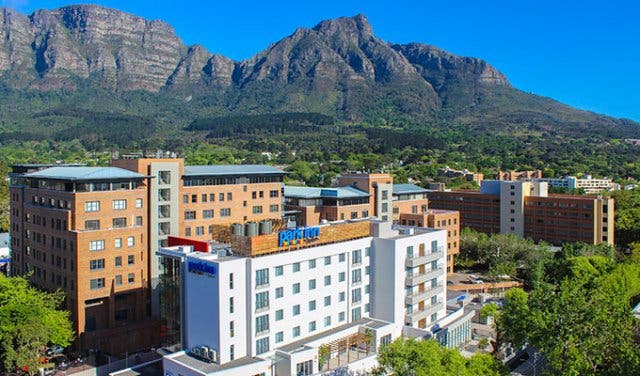 This latter public space is home to a quiet lounge, a vibey bar, an all-day-dining restaurant where buffet breakfasts and à la carte lunches and dinners are served, a terrace framed by leafy boughs and an outdoor swimming pool, and in line with the NexGen approach, it features various advanced conveniences: there’s a reading-cum-laptop table with powerful lighting, a futuristic self-service kiosk where overnighters can grab food, drink and even booze on the go, high-speed wireless Internet and plug points at every turn, so guests can, as Clinton says, “just sit and connect anywhere”.

Similarly, the five swish conference venues are at the forefront of what’s expected from function spaces, and the 122 standard, superior and wheelchair-accessible rooms (there are five of the latter) boast many innovative touches. Aside from claiming the standard suspects – king-size beds, air-conditioning, tea and coffee-making facilities, flat-screen televisions and spacious showers – they also come complete with international sockets, laptop-size safes, double-glazed windows and bed headboards fitted with a strip of luminescent mood lighting that can be adjusted to show different colours via an iPod-like touch wheel (this latter feature takes its cue from contemporary cars with neon illumination).

Not to mention, high-tech water- and energy-saving equipment has been installed to make sure everyone’s stay is a green one – after all, the hotel wants to protect the future that it’s so enthusiastically embracing. 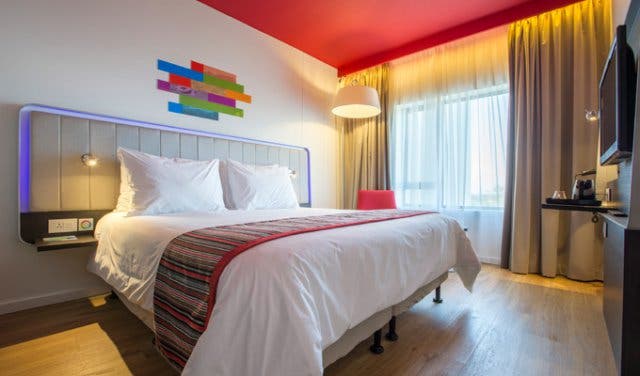 While all these bells and whistles make the Park Inn’s interior rather revolutionary, its location outside of the chaotic heart of the city is also an interesting reform on the standard and means that the Southern Suburbs gem is surrounded by a sense of tranquillity and quiet.

“Let’s face it, town is noisy, but here, you can actually get a proper night’s sleep,” says the general manager. “Plus, Newlands is green, it’s pretty, and there are lots of things to do here.”

The hotel’s close to Cavendish Square shopping centre and various natural attractions, like Kirstenbosch National Botanical Garden and the Constantia Winelands, which makes it ideal for not just working types, but leisure travellers too. And it’s a mere drop-kick away from the Newlands Rugby Stadium and Cricket Ground, so it’s hands-down one of the hottest spots for sports fans and teams to rest their heads (big televisions by the bar screen important games and sport squads staying here can have their own team rooms). 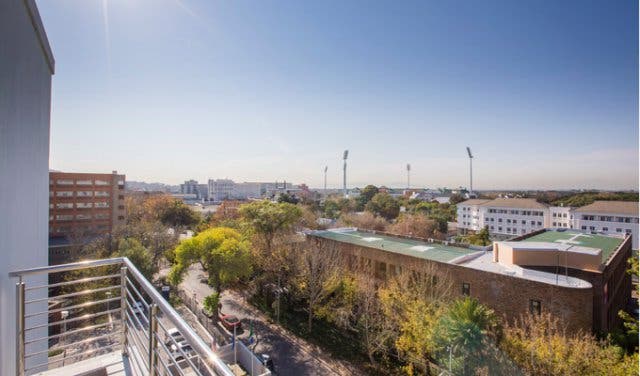 Then there’s also one other way that this NexGen property is breaking boundaries. As it’s co-owned by the Deaf Federation of South Africa (DEAFSA), the hotel employs one of the largest groups of deaf staff in the world and is committed to not only giving opportunities to the hard of hearing across all departments but also to investing in their development as future leaders in the hospitality industry. Needless to say, there is an interpreter on site, there’s braille on all signage and the environment is such that all guests with disabilities are sure to feel welcome here (in fact, the lodging won the Guardians of Sustainability Award in London in the Diversity and Inclusion category and has also been recognised by the South African Disability Alliance as a Universally Accessible Hotel).

What’s more, in 2015 Park Inn Radisson Cape Town Newlands was nominated and won eight awards under Clinton’s mentorship proving once again not only its incredible stature and universal prestige but also the professionalism and potential of its staff members. “I believe in empowering and coaching people in order to develop the next wave of leaders in the hospitality industry," says Clinton. "My philosophy is to provide excellent service to guests while unlocking the potential of staff – people are everything! Part of Rezidor’s principles is ‘living our promise’ and that includes caring for those around us." 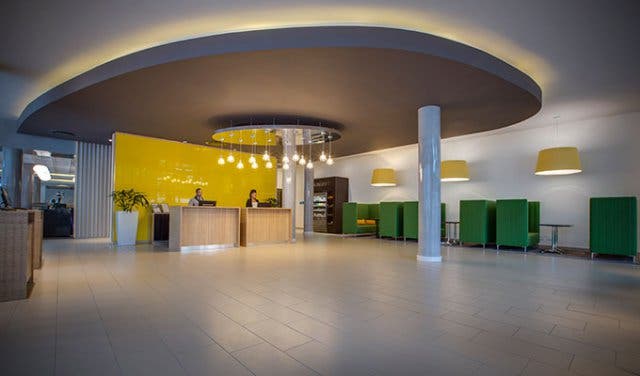 Such awards include the Guardians of Sustainability Business Award for Diversity and Inclusion 2015, the Certificate of Appreciation from the QuadPara Association of South Africa for employing up to 30% deaf team members in the hotel 2015, the South African Disability Alliance Certificate for recognition for achieving Universal Accessible Compliance 2015 and the Safe Hotel Premium Level Certification according to the global hotel security standard 2015, to mention but only a few of the hotel’s recent accolades.

It’s this sort of progressive thinking that propelled Galileo leaps and bounds ahead of his time, and it’s the kind of mentality that makes an overnight at the Park Inn by Radisson Cape Town Newlands not just enjoyable but extraordinary.

Conferencing at the Park Inn by Radisson Cape Town Newlands Hotel
Just like the rest of the hotel, the Park Inn’s conferencing facilities reflect the latest developments of the time. There are four different state-of-the-art rooms available – five if they’re partitioned – with the largest being able to accommodate up to 160 people cinema-style and the smallest, a private floating boardroom, being the perfect size for groups of 12 or less. Alongside sleek furnishings and natural light, they all boast high-definition plasma television screens, multiple international plug points, one-touch control panels, flying projectors and fun blackboard brainstorming walls that can be scribbled on with chalk.

A number of different packages are available, but the overriding philosophy emphasises smart meetings and events, which means that functions don’t just run flawlessly, but the food served at each conference takes the form of carefully portioned, balanced meals that improve functioning and concentration rather than encouraging lethargy. 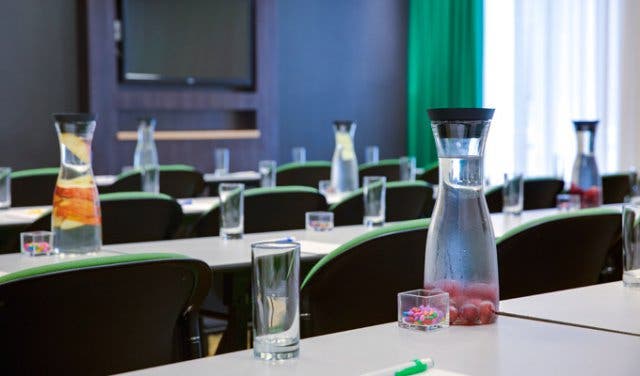 #runinn routes with Park Inn by Radisson Cape Town Newlands Hotel
The hotel’s #runinn routes are perfect for walking, running and cycling and all start and end at the establishment. As ideal for amateur joggers as it is for seasoned runners and cyclists, the trails range from 5-km to 20-kms and were created by the establishment’s expert team to help all levels of fitness enthusiasts maintain their exercise routines. Guests using #runinn routes assume full responsibility.

NOTE: Park Inn by Radisson Cape Town Newlands offers a complementary shuttle services for in-house guests within a 3-km radius of the hotel.

Tip: Aside from being a top new accommodation option, the hotel is also a hot hang-out spot for Cape Town locals looking for a place to drink and dine. The Live-Inn Restaurant and bar run regular food and booze specials, including an extended 2-for-1 happy hour special every day, a daily burger lunch deal and more. Follow the hotel on Twitter at @ParkInnNewlands for updates.

The Bill: Rates vary depending on availability, but start at R1200 for a standard room and R1500 for a superior room, both on a bed-and-breakfast basis.

Booking the Park Inn by Radisson Cape Town Newlands: Room reservations can be made by phoning +27 (0)21 822 6500, emailing info.newlands.capetown@rezidorparkinn.com or visiting the hotel’s website. 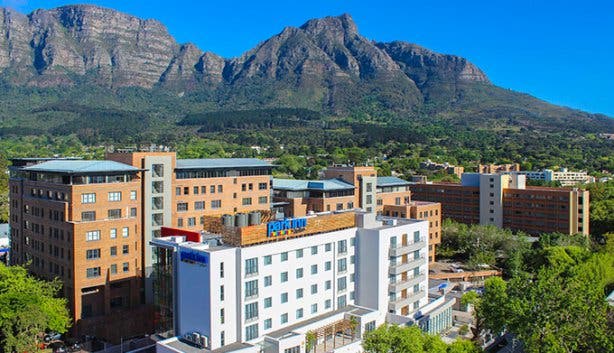 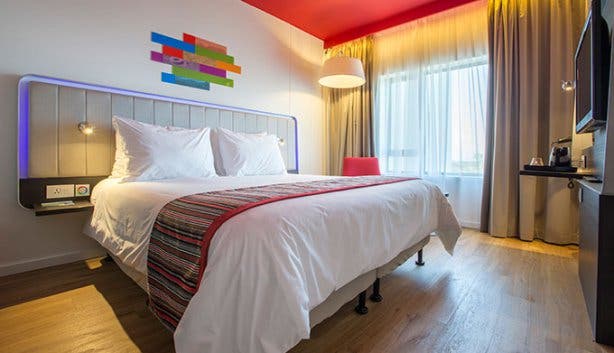 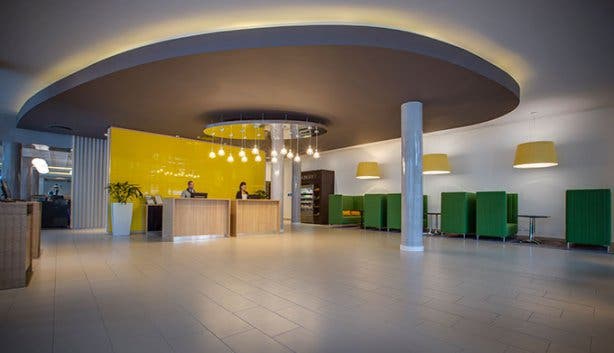 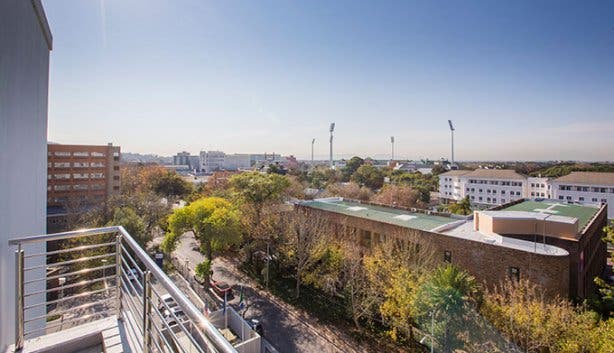 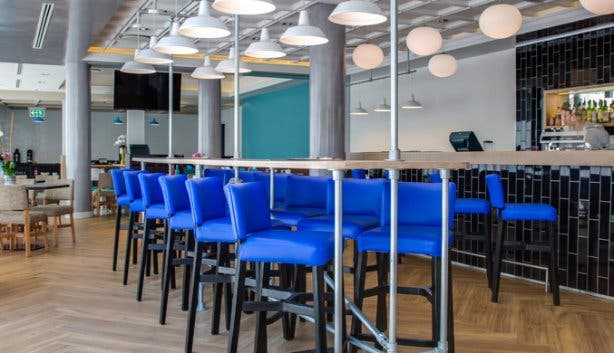 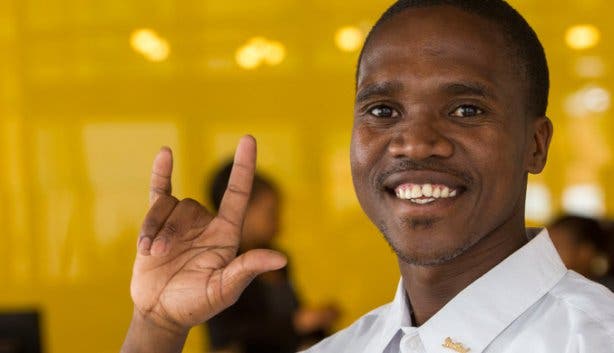 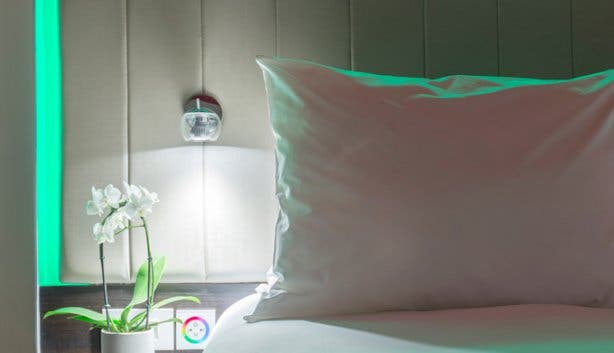 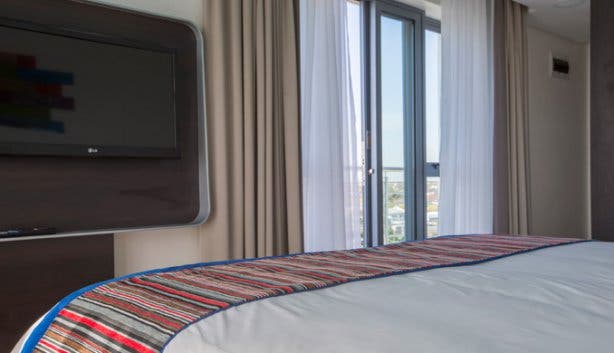 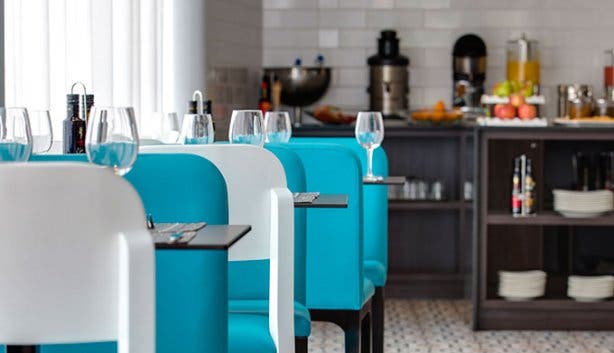 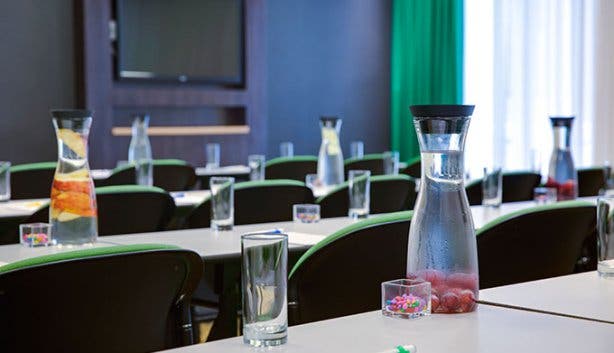