The Cape Town Minstrel Carnival is moving to 16 June

Every year the streets of Cape Town are flooded with a flurry of colour, song, drumbeats and movement as the Kaapse Klopse explode into them for the Tweede Nuwe Jaar Minstrel Parade. The traditional date is 2 January, but this year it will be moved to the 16th of June due to current health restrictions.

IT’S LIKE 60 DIFFERENT SHOWS PASSING YOU BY
Known in English as the Cape Town Minstrel Carnival, the annual New Year’s festival sees thousands of people in glittery uniforms, face paint, hats and parasols march through the city’s roads playing their signature ghoema music on banjos, trumpets and drums.

It’s not a thousand-man band. The parade is made up of several well-rehearsed minstrel troupes, each playing its own song in its own style. “For spectators, it’s like watching 50 or 60 shows pass you,” says Kevin Momberg, CEO of the Cape Town Minstrels Carnival Association.

The troupes are spaced out so that each performance happens separately and one sound doesn’t drown out the other. There is also a structure to each troupe, with non-instrument playing members called “voorlopertjies” leading the way with extravagant dance moves while the band follows them, providing the soundtrack. 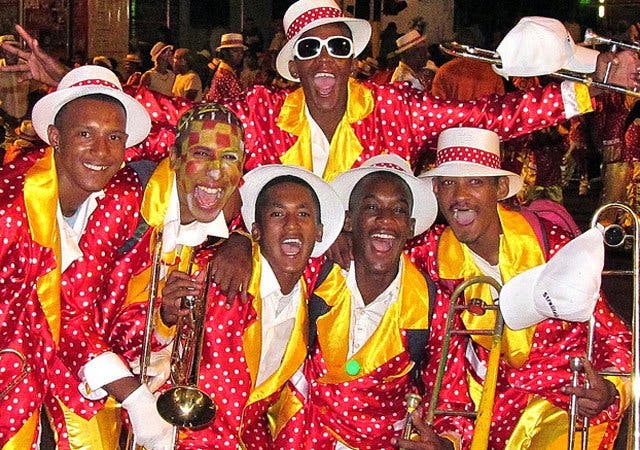 THE PARADE IS PART OF A BIGGER CONTEST
This entertaining one-day street parade is only one aspect of the broader carnival. What many Capetonians and tourists don’t know is that the open-air celebration is just a sideshow to a major competition that runs every Saturday until mid-February at the Athlone Stadium.

YOU CAN ALSO WATCH THE FORMAL COMPETITION


The lengthy, structured contest sees 40-plus minstrel clubs – each identified by a unique colour scheme and some with more than 1 000 members – compete in a wide range of categories from the best-dressed team, best band, combined chorus, male solo, drum major, minstrel song, Champion of Champions and more. This competition is a big deal to the troupes, who start practising their melodies and repertoires many months in advance.

THE KAAPSE KLOPSE HAS A COLOURFUL HISTORY
The Klopse culture is steeped in historic tradition, a history that, unfortunately, has been poorly documented. “Some of it is hearsay, some of it is folklore, some of it is even imaginary,” says Kevin, with reference to the colourful stories that circulate around the festival’s heritage.

In the folklore, the Tweede Nuwe Jaar street party dates back to the colonial era, when slavery was rife in South Africa. Slaves had only one day off a year: 2 January. So while their masters slept off the debauchery of New Year’s day, slaves used the day for revelry and self-expression through vibrant song and dance in the streets. 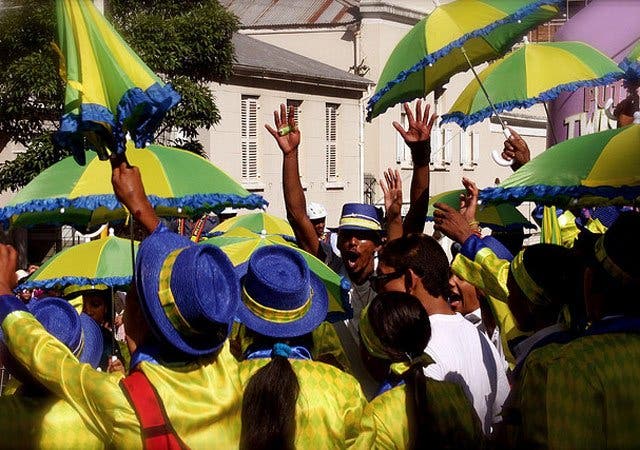 But according to sahistory.org.za, the rule came from the governor of the Cape at the time, Isbrand Broke. He wanted slaves to join the New Year’s Day celebrations by refraining from work and accepting offerings of clothing, money and tobacco. So on 1 January 1674, slaves joined their masters in celebration of New Year’s Day and, as part of their celebrations, the slaves also paraded in the streets singing serenades.

When the slaves were emancipated in the 1830s, they celebrated in the same way and continued to do so over the New Year’s period.

History plays an important role in Klopse culture and the carnival is as much about raucous revelry and entertainment as it is about preserving an age-old custom.

“Tradition is the bottom line – that’s what it’s all about,” says Kevin firmly. “It goes on today because of tradition, and it will go on for the next 100 years because of this, too.”

This is also why the carnival is a predominantly Coloured affair. Although clubs welcome those of other races and cultures, for most members, the Klopse and what goes with it is simply in their blood – a ritual they learnt from their parents and will pass on to their own children in time.

WATCH: GET INTO THE MOOD KAAPSE KLOPSE-STYLE


THE ORIGIN OF GHOEMA
Another legend states that the style of music played by minstrels, called ghoema, was heavily influenced by American minstrels who arrived in the Mother City on ships such as the Alabama (hence the famed Malay song ‘Daar Kom Die Alibama).

Some historical versions state that the slaves painted their faces to hide their identities from their masters, allowing them to make fun of the masters covertly.

Sahistory.org.za says that, because American minstrel performers were white and their acts were black American songs, they used blackface and wore colourful tailcoats. This could have impacted the locals who painted their faces black and white, but also incorporated elements of the foreigners’ upbeat melodies into their own musical mix – already a blend of African, European and Asian influences – to create the uniquely Capetonian sound of ghoema, as it’s known today.

Interestingly, it’s also likely that the term Coon Carnival, as the Kaapse Klopse was known for years before the name was officially changed, comes from these visiting performers, as coon was a common derogatory term describing slaves in America. Another interpretation is that the term coon was used because the face paint made performers look like racoons.

FOLLOW THE PARADE AND THE COMPETITION
Tweede Nuwe Jaar is the easiest way to watch the Cape Minstrels. The troupes march from Keizersgracht Street, in Zonnebloem, through Darling and Adderley Sreets, up Wale Street, finishing on Rose Street in the historic Bo-Kaap. This is free to watch and everyone is invited. Just be mindful that the CBD can get packed for this occasion and some people even camp overnight to keep their spots for the best view, so expect an excited crowd.


You can also see the more structured competition comprising a range of shows, from Afrikaans and English musical pieces to military-style marches.

This happens every Saturday between 1 January and mid-February at the Athlone Stadium. Entrance costs between R30 and R40.

Note: While many assume that the Christmas bands and Malay choirs (nagtroepe) that sing and perform in the CBD’s streets on Christmas Eve and New Year’s Eve respectively are part of the Cape Town Minstrel Carnival, they are, in fact, separate. Many Cape Minstrels also participate in these groups, and while they are certainly an important ingredient of the broader holiday-time festivities, they are not strictly a part of the Kaapse Klopse.

Find something to do the day before the big carnival with these things to do on New Years Day.

It may not be ghoema, but you can still see some great music at these live music venues.

Or keep dancing long after the parade is over at one of these Cape Town nightclubs. 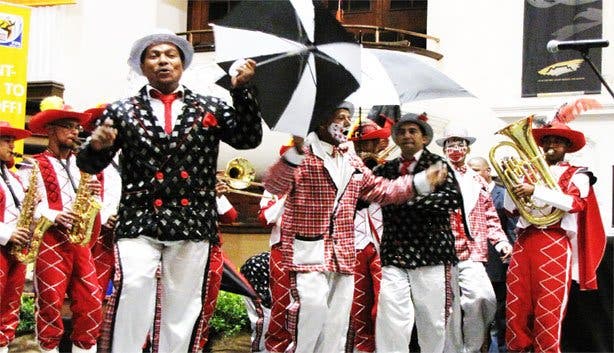 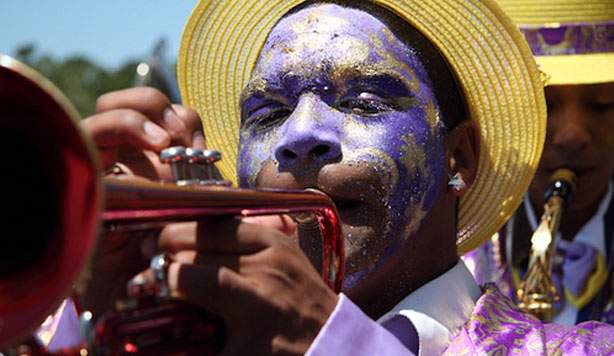 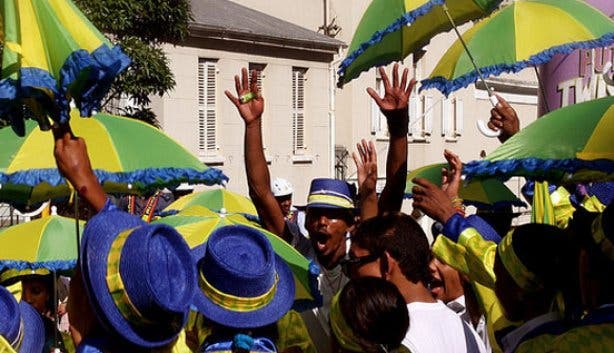 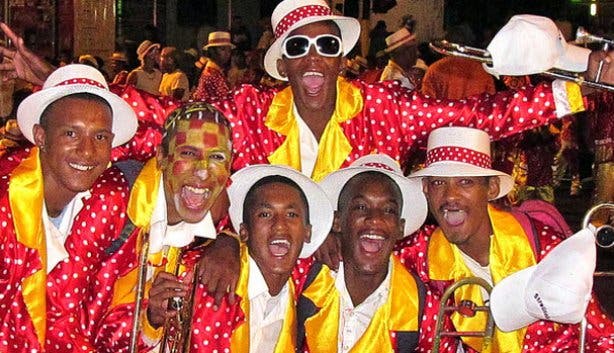