Dutchies has cocktails, sushi and welcomes all (dogs, too)

Grotto Road, in Hermanus, winds down through wild, green coastal growth and delivers you to Dutchies, a charming, family-friendly beachfront eatery, where nature is all around.

In front is Grotto beach, which has Blue Flag status, an award that acknowledges safety, ecological value, beauty, and accessibility (it’s a 10-minute drive from central Hermanus and is safe for swimming, surfing, and other watersports). The back and sides of Dutchies is hugged by dune forest, and small wagtails and mossies comb the grounds of the restaurant for crumbs. 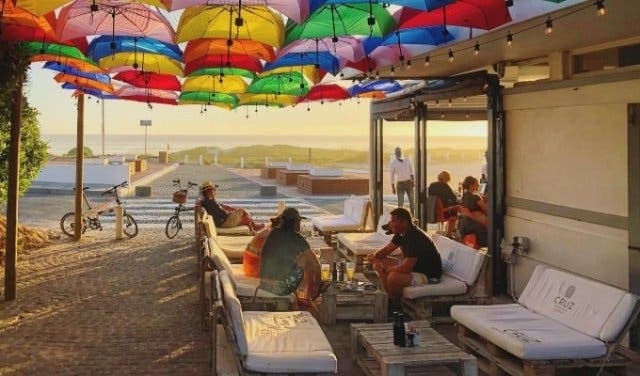 Sit under the colourful umbrellas and have a drink with friends. Image: Dutchies

BRING YOUR FAMILY AND FRIENDS ALONG

There’s a choice of three seating areas there: inside the restaurant, which at night is lit with candles; the courtyard, where wooden tables under umbrellas are set out around an ancient milkwood tree; and the breezy outside "porch" areas to the front and sides, which has generously spaced low tables and comfy chairs. Wherever you sit, you can kick back and relax; you won’t be rushed. Which is why it is a popular space for families. 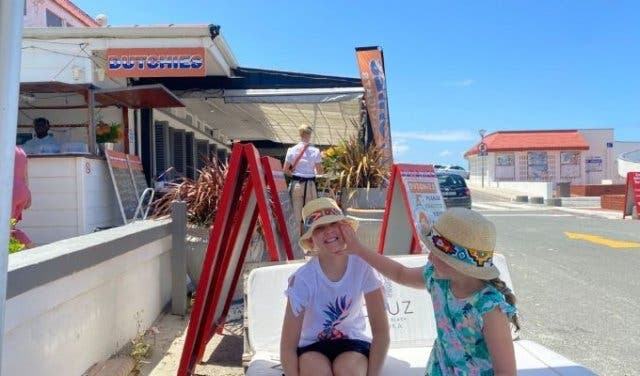 Bring your family and furry friends along, all are welcome at Dutchies. Image: Dutchies

ENJOY FRESH FOOD, MADE FROM SCRATCH

If there’s one thing manager Ramon Celliers is proud of, it’s the freshness of the food. Joke Gonggrijp is uncompromising on quality, he says. “We refuse to sell frozen fish. Even the Norwegian salmon is flown in fresh.” The tuna for sushi comes from Mauritius, he adds. The rest of the fish is bought locally, from Whale Coast Seafoods in Hermanus, or from Gordon’s Bay. 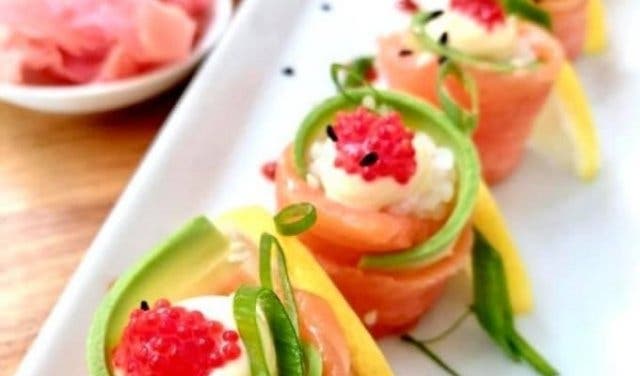 Recently, a new space was created for the sushi kitchen. It’s now in the courtyard area, and the sushi that comes out of there is melt-in-the-mouth fresh. There’s plenty of seafood, too (and scrumptious hake and chips), but what the kitchen does that is unique to Hermanus is the Dutch fare, including wentelteefjes (French toast with apple), bitterballen (deep-fried meatballs with mustard) and the Dutch Special (beef croquettes on bread), stroopwafels and deconstructed stroopwafel. 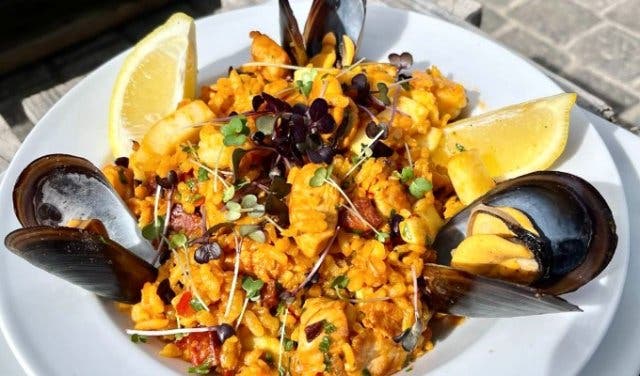 Taste some of best seafod dishes, by the ocean. Image: Dutchies

GET YOUR DAILY FIX OF FRESHLY BAKED CROISSANTS

The other co-owner of Dutchies and Joke’s son, Daan Gonggrijp, recently opened a bakery in town, a small neat space where, first thing in the morning, the shelves are filled with delicious fresh breads, croissants (including pecan, almond and chocolate) and a wide variety of pastries. Daan’s father, Just, has been instrumental and tenacious in getting the croissants just right. These are delivered, still warm, to Dutchies first thing in the morning. They’re heaven enjoyed with a rich, strong coffee. 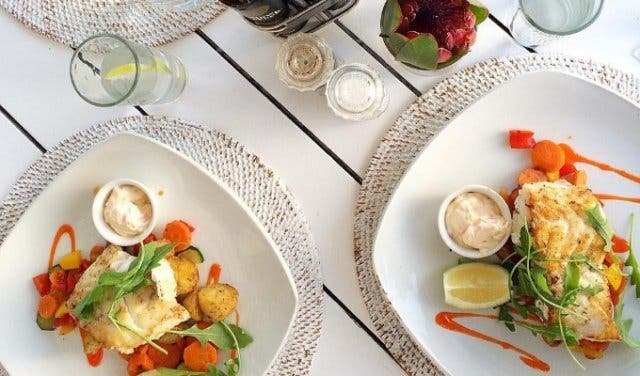 Eat with your eyes first at Dutchies. Image: Dutchies

Sometimes when you step off the beach, you only feel like light snacks and an ice-cold drink (Dutchies has fantastic cocktails). The tapas menu answers the snack need with light choices to share, such as dates filled with chorizo and wrapped in bacon, garlic shrimps (R70 for 10), spicy crab wontons (R45 for 3). 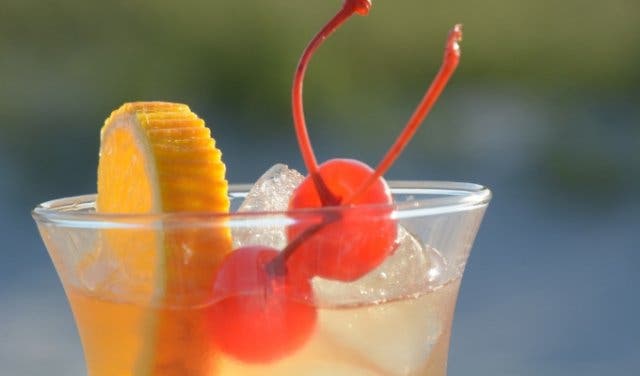 Vegetarian options are tomato-and-basil bruschetta (R45 for 3) and tortilla chips with guac and salsa (R70). There are more substantial choices for mains, a chickpea-and-avo salad (R115), mushroom risotto (R120) or grilled sweet potato topped with cheese, sour cream and avo dressing (R125). Omnivores are spoilt for choice, with grilled sirloin (R159), fillet (R189) and burgers (R115) among the dishes. 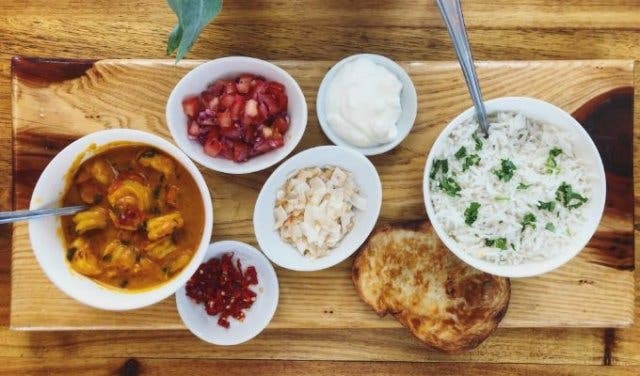 Enjoy a variety of vegetarian options that will make your carnivore friends jealous. Image: Dutchies

EXPLORE GREAT OPTIONS FOR YOUR KIDS

The kid’s menu is exactly all the food children love and crave when fresh off the beach: chips, fish fingers, chicken strips, junior ribs and, naturally, beef or chicken burgers.

And how about this delightful touch? Dutchies makes its own dog biscuits (why do the dogs go nuts for them, we asked? Peanut butter is the secret), and dog bowls with fresh water are put down for pooches to lap up after long walks. Everyone is really made to feel wanted and at home here. 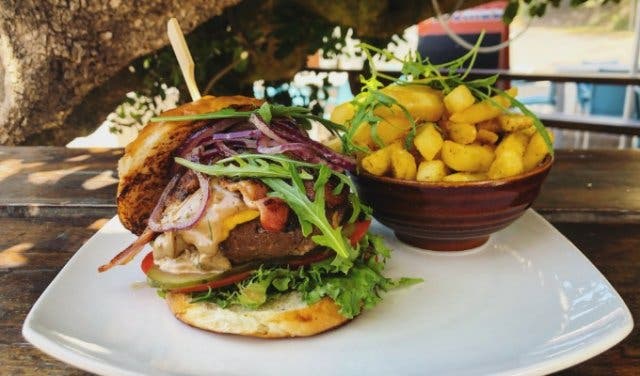 Bring your dogs too, there's a menu just for them. Image: Dutchies

PICK A DATE AND GO

Ramon says there’s a time towards the end of day when everything cools down and the wind calms. It is lovely, then, to sit in the garden area or out front and drink a cocktail or mocktail (very fresh and more-ish). But there are more special times: in the morning for breakfast when the croissants are still warm from the oven and Ramon puts out seed for the now-fat little mossies, or dinner time when the candles are lit and the atmosphere is convivial and families in the area occupy tables and hang out with each other. Dutchies has a lot of local support, says Ramon – it has been under the Gonggrijp family for eight years and they’ve watched families children grow up there. So take note that it’s best to book ahead. 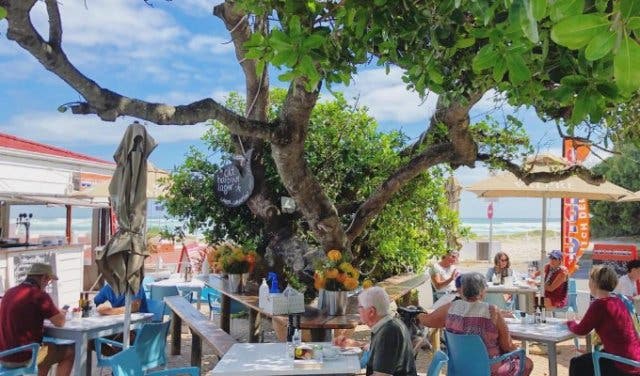 Enjoy a view of the beach and your food. Image: Dutchies

FIND OUT THE STORY BEHIND DUTCHIES

Dutchies is owned by Joke and Daan Gonggrijp from the Netherlands (hence Dutchies). The story behind it is inspiring: Daan became very ill with a brain tumour while they were still living in Holland. His mother promised him that, should he survive, he could follow his dreams and she and Just would support him however they could.

Happily, Daan did survive and later travelled to South Africa and Hermanus to work at a small restaurant on Grotto Beach for six weeks – this helped him with his recovery, he explained. When he learnt the owners wanted to sell that shop, he told Joke that it was his dream to own it. So his parents moved to South Africa, and the rest is history. 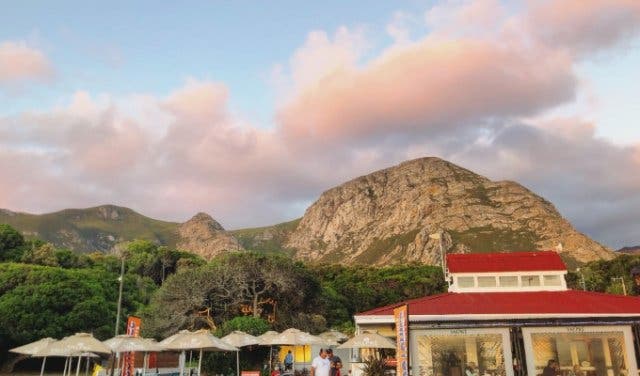 There are great views in all directions. Image: Dutchies

Dutchies is open: Monday to Sundays, 9am to 9pm 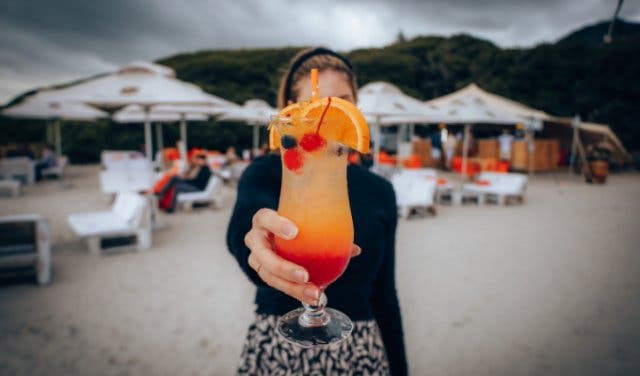 Every summer from December till April, Dutchies opens its Summer Lounge.

Feast on local, fresh abalone with a sea view.

Dutchies is the sister restaurant to one of the biggest attractions in the Western Cape: A restaurant and bar set into the rocks, over a tidal pool, called Fick’s.

Hermanus is famous for being one of the prime whale-watching areas worldwide. Here’s a guide you’ll find useful.

Make the most of your visit to this rich little town – there’s no shortage of things to do. 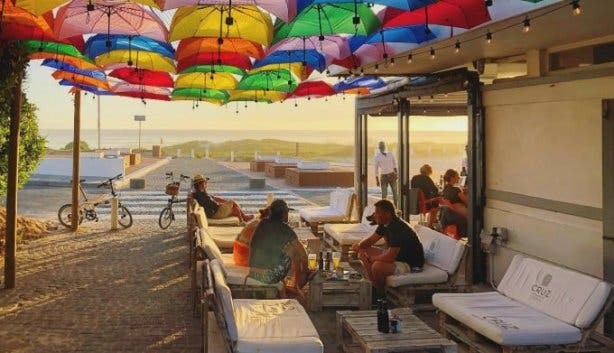 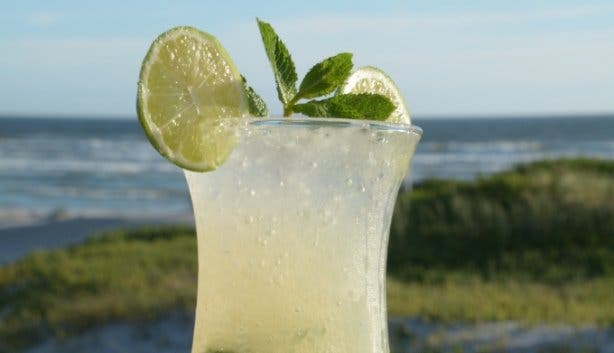 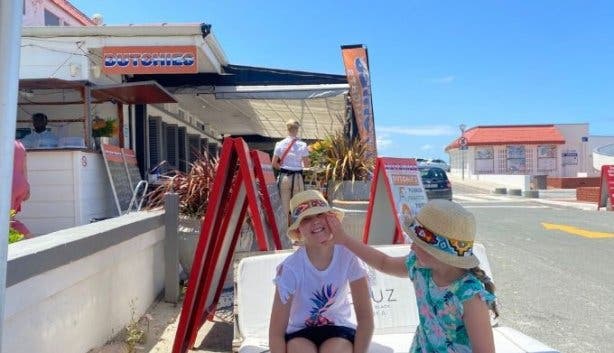 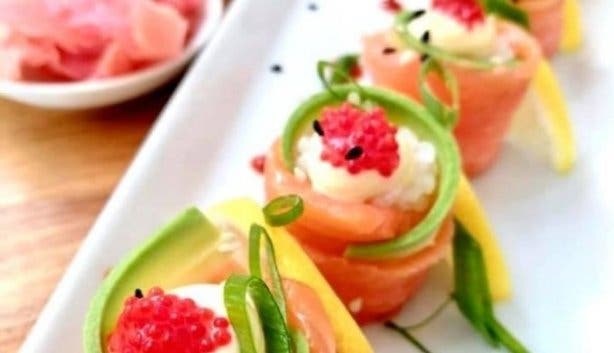 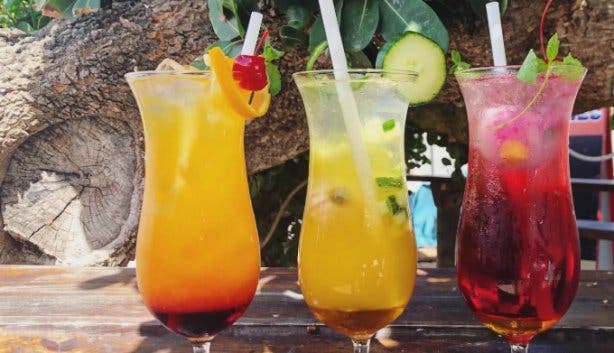 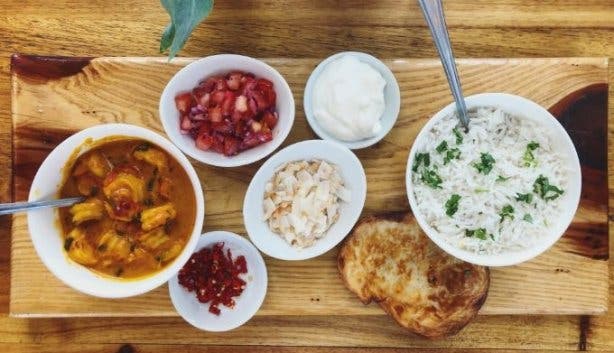 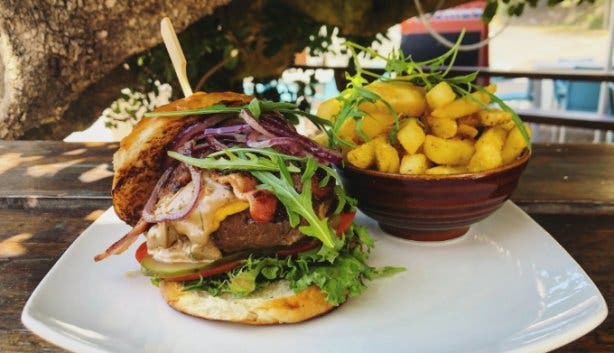 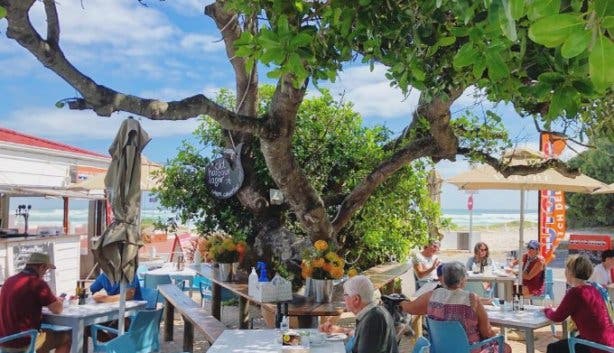 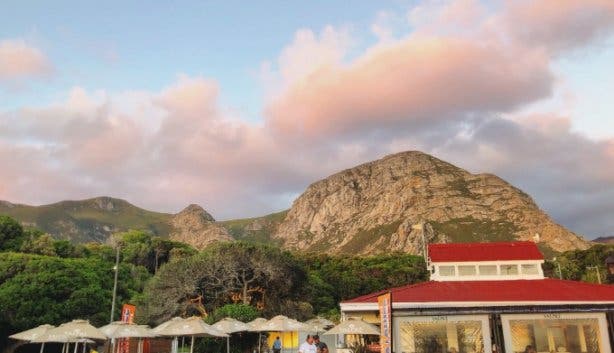 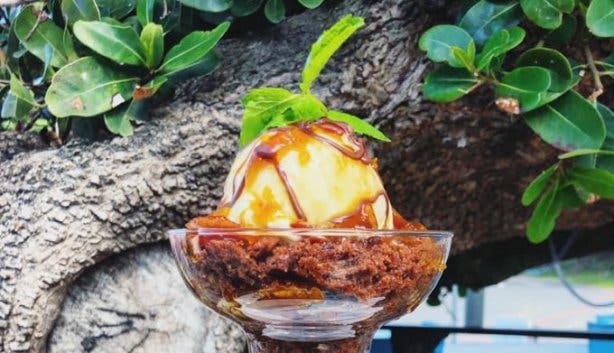 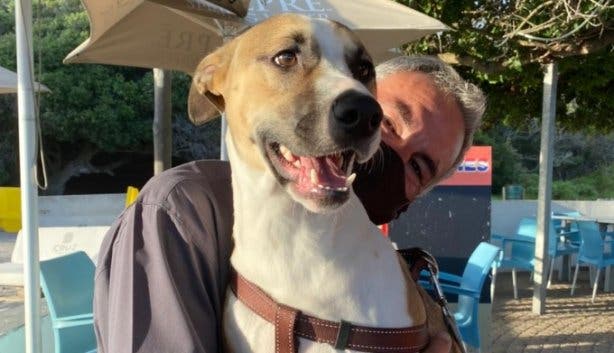 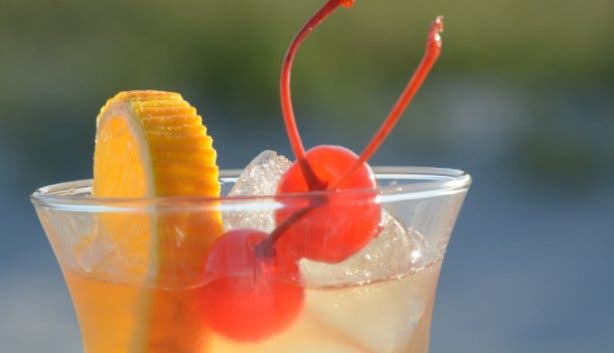