The first thing you notice is a giant ostrich perched in the middle of the bar. Oskar is as large as he is outrageous. A master-of-ceremonies type mascot; his presence encourages all patrons - both young and old, corporate and create - to loosen their ties, let their hair down and enjoy the eclectic atmosphere the establishment exudes.

The Village Idiot is a fantastical bohemia-meets-1980’s-plaashuis restaurant and bar lodged on Loop Street. Positioned perfectly; the popular neighbourhood hangout is a fair distance from the congestion of the CBD while still being close enough to feel connected to the exciting buzz of the inner city. The soft leather booths and crackling fire make it easy to understand why this local watering hole is so popular. I make myself at home whilst having the Cheers theme song humming in my head (it’s the song Where Everybody Knows Your Name for the millennials who don’t know what I’m talking about). 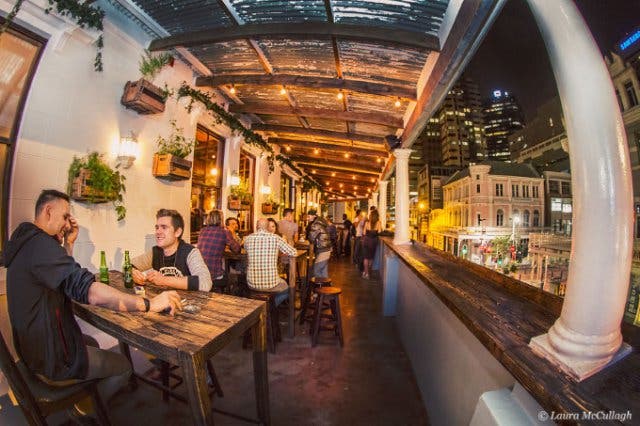 The Village Idiot was launched in May 2015 by Reg Macdonald and his partner Grant Baker, who together envisioned creating a homey drinking hole that served great food and drinks in an environment that also lent itself to a bit of silliness and tomfoolery too. Reg, being no stranger to the hospitality game and has opened an extensive list of establishments (nightclubs, bars, you name it) all over the world. The Village Idiot is not his only Cape Town venture; those familiar with the city’s hotspots will know him as the guy behind the rock ‘n’ roll nighttime haunt Aces ‘n’ Spades. He also co-owns Harringtons, District and Surfa Rosa.

The atmosphere here, though, is very different from the fast-paced, high-energy ambience typical of Aces ‘n’ Spades, and instead offers the same swanky familiarity as Harringtons. This is a space where, as Reg puts it, “invites you to relax, unwind after a long day at work, and adopt a carefree attitude.” The venue, decorated with quirky trinkets and vintage collectables, also boasts a large balcony that plays host to spitbraais in both the summer and winter seasons. Patrons can also enjoy unique views of the surrounding concrete jungle. There are beautiful Persian rugs on the floor, rad surfboards sit on the exposed rafters overhead, and there is taxidermy galore! In short, The Village Idiot is, as Reg brags, “a place where we raise our glasses to foolish renegades, adventurous idiots and all the people who refuse to live life by the rules of normality.” 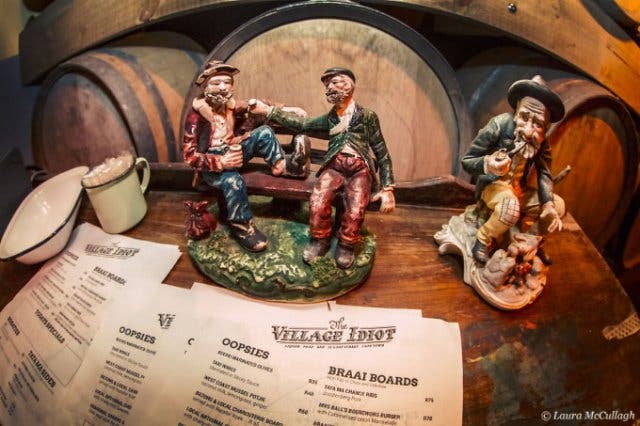 A place with an ethos of such unconventionality is going to serve up some weird and wonderful food. Think Mrs Balls boerewors burgers with caramelised marmalade for R75, or koeksisters with amasi ice-cream for R55; flavours that successfully marry the diverse cultures and tastes of our glorious country.

Bunny chows and braai boards to treat both the meat eater and the vegan/vegetarian. Buchu marinated olives, and aubergine pate served with roosterkoek, for R45, is something those who aren’t carnivores can look forward too.The Village Idiot has delicious meat free versions of their dishes that are packed with flavour and are sure to leave you full and satisfied. The bar is stocked with both local and imported booze, and you can quench your thirst with a draught for R45 or you can treat yourself to a shot of Chivas for R400. Bartenders will also surprise you with classic cocktails that have a creative South African twist (there’s a gin and rooibos-infused concoction, for example). So if you are worried you might not find anything to suit your taste; you can rest assured that you will be taken care of. 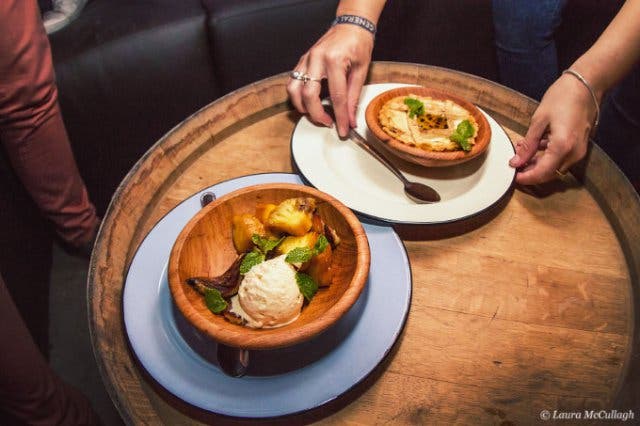 In no time, my visit with The Village Idiot is over, and as I leave I feel a great sense of loss. This glorious place has made me nostalgic. It’s transported me to an extraordinary mixture of memories; from sitting in the kitchen while grandma made malva pudding for afternoon tea, to adding lashings of Mrs Balls chutney to my samp and beans. Perhaps that’s what the creators of The Village Idiot were hoping to achieve; to create a place that feels so uncharacteristically familiar that people keep coming back. To create home. 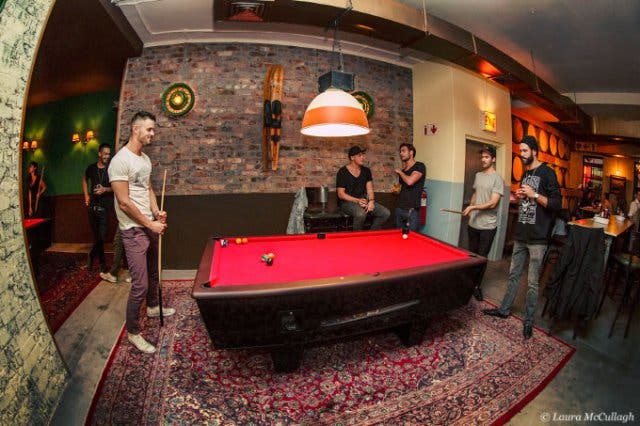 Tip: The venue boasts TV’s and a large drop down projector that will be used to screen sports matches. The Village Idiot also hosts a series of weekend events (weekly spit braais on the patio and nights tend to get pretty festive). For more information, visit The Village Idiot’s Facebook page or call +27 0(21) 418 1548.

The Bill: The Village Idiot’s prices are quite reasonable. Starter items range from R45 to R70, braai boards are priced between R90 and R120, sosaties ring in between R60 and R90, sides all cost R20 and desserts are all R55. Drinks (including craft beers and cocktails) sit around R45 (for glasses) and between R110 and R400 for bottles of wine and champagne.

Looking for a magical city centre-based eatery? Here’s the 411 on Kloof Street House. 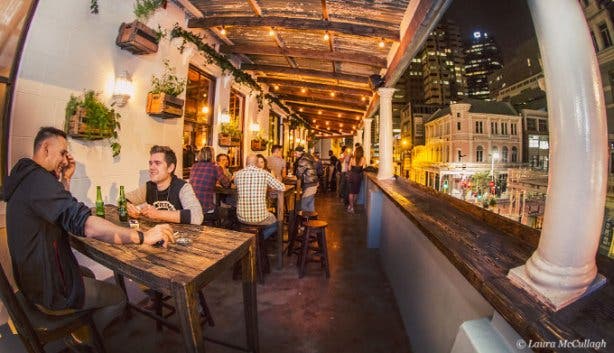 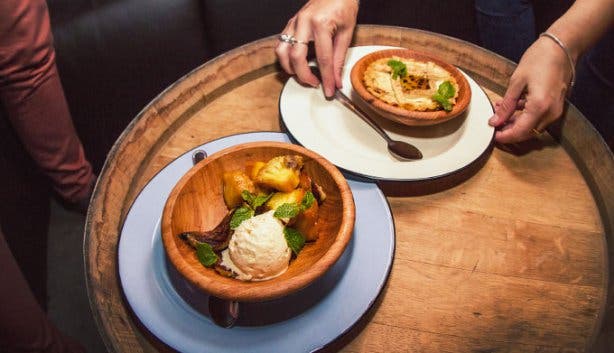 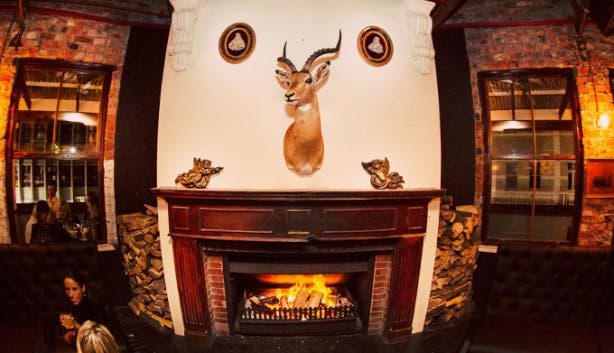 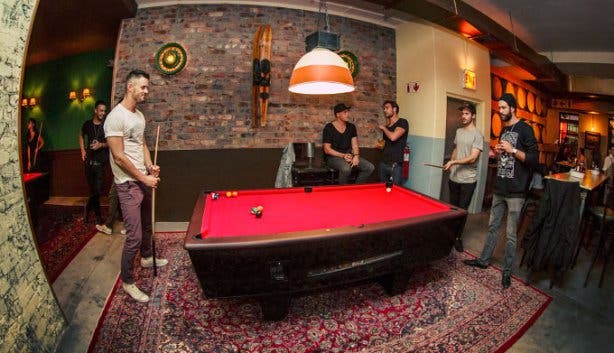 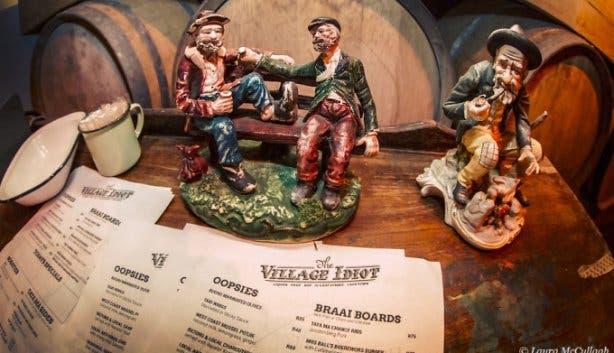